We Broke New Ground on Arabella’s “Dark Money” in 2022 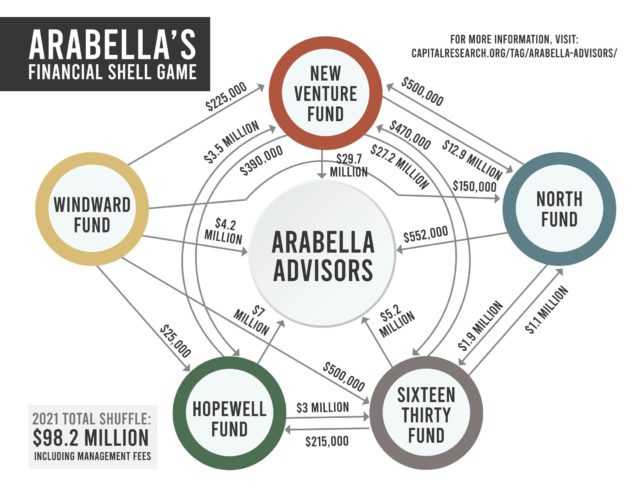 This year (2022) was a big year for exposing the activist Left and the well-heeled, secretive interests bankrolling them. At the center is Arabella Advisors and its $1.6 billion nonprofit network, which Capital Research Center first exposed in late 2018. Since then we’ve only revealed more of this “dark money” giant’s secrets, including the most in-depth expose on the Arabella empire ever written—read it in the Tablet.

When we broke the news on the Arabella empire, no one associated it with “dark money.” Three years later, Arabella’s become the poster child of secret spending in Washington, DC. Telling the truth matters. 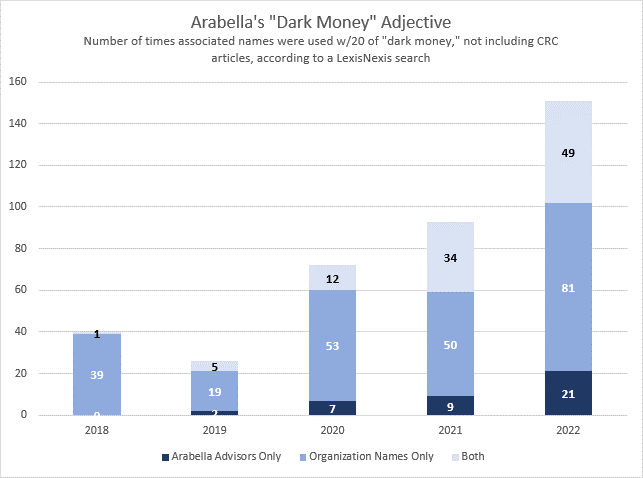 In a September letter to the Wall Street Journal, Arabella president Rick Cruz portrayed his organization as an unobjectionable human resources provider focused on “operational support,” “compliance and accounting” for its “clients”—anything but the political titan that it actually is.

We responded with our own letter to the Journal pointing out the obvious: Arabella created its own “clients” and housed them down the hall, staffing them with Arabella employees and senior officials on the board. Our question was simple, “Why won’t Arabella proudly admit its success in building a multibillion-dollar empire that’s a pillar of the Democratic Party?”

One of the most important developments in the Arabella story unfolded in November, when we reported on a lawsuit against Arabella’s top 501(c)(3), New Venture Fund. While details are still emerging, the case involves a former vice president for Voting Rights Lab, a former front for the New Venture Fund, who alleges civil rights violations including racial discrimination (she is African American) as well as multiple nonprofit tax violations. We’re continuing to report on the case as it develops into 2023.

Speaking of lawsuits, Louisiana Attorney General Jeff Landry (R) is cranking up the heat on New Venture Fund for its role in spreading “Zuck bucks” in the 2020 election. Landry’s original case was dismissed by a lower court in late 2020, only to be reinstated by an appeals court in April 2022.

The Arabella network’s involvement with the Center for Tech and Civic Life (CTCL), the main Zuck bucks recipient, remains a mystery. But we expect the lawsuit to shine a light on their exact relationship sometime in 2023.

In January, Government Accountability & Oversight filed an ethics complaint alleging that House Democrats broke a prohibition of private financing of official congressional business—thanks to help from Co-Equal, an Arabella-run “pop-up group.” In other words, if reports are true, a nonprofit helped House Democrats break ethics rules to go after so-called climate deniers standing in the way of a Green New Deal revolution. Not good optics for the supposedly politically neutral Arabella Advisors.

But that’s not all. In May, the watchdog group Americans for Public Trust filed a lawsuit urging the Federal Elections Commission (FEC) to investigate one of the Arabella network’s biggest donors, Swiss billionaire Hansjörg Wyss, for alleged illegal contributions to multiple Democratic campaigns. That investigation extends to his foundation’s donations to Arabella’s nonprofits, one of which runs a Wyss-backed front group: the Hub Project. The Hub Project was created to “research-based message frames” to “drive measurable change” and achieve “significant wins” for Democrats. Catch our coverage here.

If you haven’t heard of Dave Skinner, credit him as the original discoverer of the Arabella empire—in 2008. In 2022, we were privileged to publish Skinner’s fascinating story of how one Montana journalist stumbled across Responsible Trails America, one of Arabella’s earliest pop-up groups, and documented the odd origins of the company’s founder, Eric Kessler. You don’t want to miss it.

In 2021 the Arabella network showed its staying power, as its total network revenues declined by just $148 million to nearly $1.6 billion compared with 2020. What didn’t decline was the $98 million in grants the “sisters” funneled to each other, which makes tracing these funds only harder. 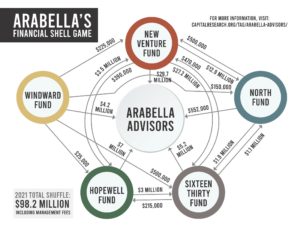 We were the first to report on the Arabella network’s newly minted fifth “sister,” the North Fund. While the North Fund has been in operation since 2019—when 100 percent of its revenues came from Arabella’s Sixteen Thirty Fund—our digging placed this mysterious group squarely in the Arabella camp.

What do we know about North Fund? Quite a bit. Like Sixteen Thirty Fund, North Fund is a 501(c)(4) designed to carry out Arabella’s most politically charged advocacy campaigns, including numerous state ballot initiatives and the effort to grant DC statehood.

In February, we reported on the $44 million the Sixteen Thirty Fund poured into 29 states ahead of the 2020 election, including key battleground states such as North Carolina and Arizona. Much of that money went to get-out-the-vote groups boosting Democratic turnout in Senate races. Yet the effort largely fell flat, with Democrats picking up just four seats out of 19 races targeted by the Sixteen Thirty Fund. Money can’t buy everything.

Those battlegrounds included Alaska, where voters decided against holding a state constitutional convention after an intense lobbying campaign by Defend Our Constitution—a “bipartisan” group fueled by Sixteen Thirty Fund.

Not What They Seem

Speaking of Alaska, we discovered an onslaught of partisan “news” assaulting the state in April, courtesy of an Arabella spin-off States Newsroom. As always, the goal is to tilt the state leftward—something States Newsroom admitted in 2019 when it called itself a “progressive political journalism startup.”

Deception is a hallmark of the professional Left. So it goes with Science Moms, a pressure group aimed at grifting suburban women into voting for Democrats because “our kids’ future is at risk” from global warming and science “deniers.” What Science Moms doesn’t advertise is that it’s really run by two men, both climate activists, and is likely a front for Arabella’s Windward Fund paid for by the Hewlett Foundation.

Is the Arabella Network Telling the Truth About Itself?

Arabella likes to pretend its nonprofits are apolitical. But secret emails obtained in October reveal how Arabella talks about itself when no one’s looking.

Instead of maintaining careful distinctions between the company and its nonprofits—as Arabella insists others do—Arabella and New Venture Fund present a united front to potential clients, even sharing letterhead. Arabella refers to its nonprofits as “our network” of “partners” with combined expertise shared across numerous joint campaigns. In a few instances, the company even writes that Arabella, not New Venture Fund, is “working with several climate funders . . . to advance ambitious clean energy policies.”

Add to that our discovery in 2022 of a set of holding companies that own Arabella Advisors LLC, furnishing one more layer of mystery to this giant.

Earlier this year, we exposed the Arabella front group leading the campaign to kill the Senate filibuster, ironically named Fix Our Senate. Far from a grassroots effort, we pointed out that at least 17 of the signatories to Fix Our Senate’s anti-filibuster letter are funded by the Arabella empire—while one signatory is an Arabella pop-up group. As CRC president Scott Walter put it,

Arabella and its dark money backers are using groups such as Fix Our Senate to create the illusion of popular outrage. They want to give narrow partisan majorities in Congress cover to junk the filibuster and impose unpopular, and likely unconstitutional, laws that would make elections harder to run and jeopardize public trust in voting.

One of the biggest news stories of 2022 was the confirmation battle over Supreme Court Justice Ketanji Jackson. What the mainstream media missed was the role of the Arabella-spawned group Demand Justice in running Jackson up the flagpole, from lower court to the nation’s highest court in a few scant years.

We traced Demand Justice’s seven-figure ad campaign backing Jackson as well as its radical proposals for “fixing” the Supreme Court, which the group claims will “depoliticize the Court once and for all.” That’s hard to believe when Demand Justice’s own board includes former Perkins Coie lawyer Ezra Reese. Read more here.

Conservatives have a lot of work to do to shore up our nation’s elections. That starts with exposing the leftist groups trying to radically transform them. Enter Arabella’s Center for the Secure and Modern Elections, created to push Zuck bucks, mail-in ballots, and automatic voter registration nationwide.

We charted the center’s damage in 2020, its close alliance with the Zuckerberg-backed Center for Tech and Civic Life, proximity to vote-by-mail groups, and the threat of automatic voter registration to the health of our elections.