How Much Did Arabella’s Center for Secure and Modern Elections Undermine the 2020 Election?

CSME and CTCL have been sued by Louisiana; for the latest on that lawsuit, see “Louisiana Turns Up the Heat on CTCL and Arabella’s New Venture Fund” (April 2022)

The Left’s top “dark money” network was highly active in manipulating the 2020 election to elect Democrats and defeat President Donald Trump. That network, run by the shadowy consulting firm Arabella Advisors, was recently exposed by the Capital Research Center for raking in a staggering $1.7 billion in 2020 alone—and $4.7 billion since 2006.

Exactly when the center was established is uncertain, but its origins date back at least to 2016, when it was the focus of an election panel for politically active grantmakers hosted by the Funders Committee for Civic Participation.

CSME seems to have started as “the Cities Project,” according to some older grant reports. It’s a joint project run by the New Venture Fund, Arabella’s $975 million flagship 501(c)(3), and the Sixteen Thirty Fund, Arabella’s 501(c)(4) lobbying shop. That means that all donations to the center are really donations to Arabella’s nonprofits, which aren’t even mentioned on the CSME website. It also means that the center doesn’t file public Form 990 reports with the IRS, keeping its exact finances a secret.

We’ve traced grants to both Arabella hosts to fund CSME from the leftist Bauman Foundation, which is tied to the Democracy Alliance; eBay founder Pierre Omidyar’s Democracy Fund and Democracy Fund Voice ($1 million); the Blaustein Fund ($200,000); the mysterious pass-though Wellspring Philanthropic Fund ($1 million) to expand mail-in voting; and the Joyce Foundation, where then-Sen. Barack Obama (D-IL) was once a board member.

The Joyce Foundation’s $600,000 grant was meant to help CSME support “elections jurisdictions in WI [Wisconsin], MI [Michigan], MN [Minnesota], and OH [Ohio] for the November 2020 election,” all of which were targeted by Biden campaign after Trump unexpectedly flipped Wisconsin and Michigan in 2016 and came within 45,000 votes of winning Minnesota, a decades-old Democratic stronghold. The professional Left and Big Philanthropy were intent on not letting that happen again in 2020.

We know that the center was actively working with the Center for Tech and Civic Life (CTCL) to effectively privatize the 2020 election in thousands of local elections offices nationwide. New Venture Fund’s latest Form 990 reveals a $25 million grant to CTCL. But where was it active?

A lawsuit filed by Louisiana Attorney General Jeff Landry in late 2020 accused CTCL of injecting “unregulated private money” into the state. CTCL’s communications with parish officials, Landry discovered, were facilitated by a local Democratic consultant and the then-obscure Center for Secure and Modern Elections.

A state judge shot down the lawsuit in late October, so Landry never made it to the discovery process. But we now know the Arabella-run center was actively aiding CTCL in a safe Republican state and warping the election in Wisconsin, Minnesota, Michigan, and Ohio—all of which received CTCL funds (exact amounts are unclear). Other documents suggest the center funded a campaign to track changes to voting laws brought on by COVID-19 ahead of the 2020 election.

Ashish Sinha, a former Funders Committee for Civic Participation employee, was involved in an email chain between CTCL leadership, the National Vote at Home Institute (NVHI), and elections officials in Green Bay, Wisconsin. In the chain, they discussed the use of private drop boxes and “targeting communities” with absentee ballots in the coming 2020 election: 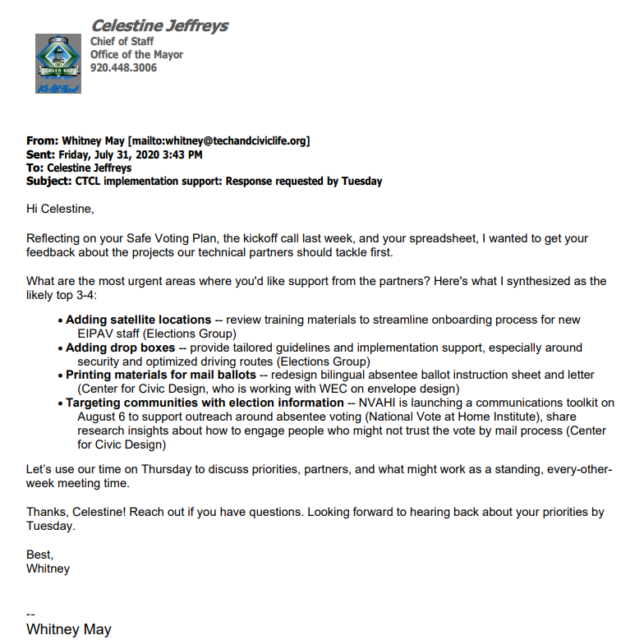 Why does this matter? Public record requests after the election revealed how Michael Spitzer-Rubinstein, a Vote at Home Institute staffer, practically ran Green Bay’s election as the city’s “de facto elections administrator” with access to its absentee ballots days before the election.

Spitzer-Rubinstein had access to four of the five keys to the ballroom where early ballots were stored and counted, and he even asked the city clerk to “cure” problematic absentee ballots. Green Bay “went rogue” under NVHI, in the words of the Brown County clerk. Green Bay also received $1.1 million from CTCL, the third-largest grant in Wisconsin.

Sam Oliker-Friedland, CSME’s chief counsel, previously worked for the digital campaign training group that birthed CTCL: the New Organizing Institute. We’ve documented its history here, but in short the now-defunct institute trained activists in registering voters and getting them to the polls in order to elect Democrats, earning it the Washington Post’s praise as “the Democratic Party’s Hogwarts for digital wizardry.” Three of the institute’s staffers—Whitney May, Tiana Epps-Johnson, and Donny Bridges—went on to found CTCL, where they perfected their craft to devastating effect in 2020.

The full extent of these three groups’ involvement in key states may never be known. But the evidence of their involvement in manipulating voting laws and election procedures behind the scenes is only growing.

CSME provides allies with model bill text for automatic voter registration, one of the Left’s longtime goals. Many Democratic groups (wrongly) believe that high turnout always helps Democrats, so focus on enacting bills to push voter registration on as many people as possible.

It popped up again in a recently discovered, confidential “Statement of Work” contract for February–June 2020 between New Venture Fund and Dickinson & Avella PLLC, an Albany, New York–based political consultancy:

In partnership with Marc Solomon and the Center for Secure and Modern Elections (CSME) staff, represent New Venture Fund’s CSME project in support of Automatic Voter Registration and other provoter [sic] modernizations before the New York State Legislative, Executive and Administrative branches of government [emphasis added].

Todd Shepherd, a reporter for the Pennsylvania-based Broad & Liberty, notes that Marc Solomon is a principal at Civitas Public Affairs, a nominally Republican-led consulting firm in Washington with clients that include the left-wing Voto Latino, Campaign Legal Center, Voter Participation Center . . . and Center for Secure and Modern Elections.

Solomon and his colleagues led the gay marriage campaigns of the early 2000s (Freedom to Marry) and seem to specialize in deception. I’ve documented Civitas’s role in secretly infiltrating the conservative movement with a global warming, pro–carbon tax group practically run by its own staffers, most of whom come from far-left organizations.

Surely this is only the tip of this iceberg. With Arabella’s Form 990 filings out and CTCL’s expected in December, we’ll be able to dig further into how the professional Left twisted the 2020 election to its own ends.