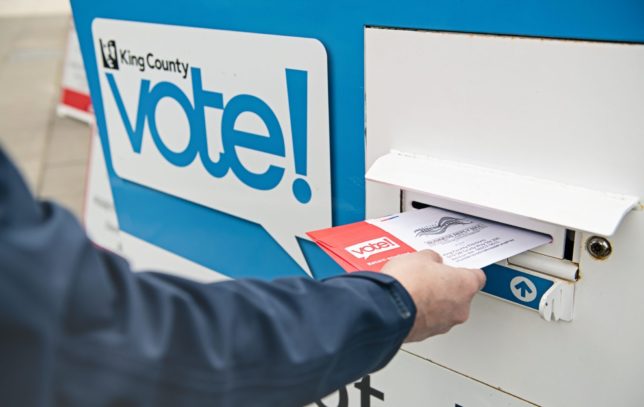 “Zuck bucks” are no more. After pouring $350 million into largely Democratic districts in the 2020 election, boosting turnout for Joe Biden in strategic counties, the Center for Tech and Civic Life (CTCL) has announced it won’t be trying to privatize all future American elections.

Instead, it wants to federalize them.

Earlier this month, CTCL revealed its next project: the U.S. Alliance for Election Excellence, an $80 million campaign to boost federal funding for elections, which are administered by the states, while centralizing how they’re run. Make no mistake, this is the professional left at work, and it starts with making vote by mail permanent.

America’s elections offices received $800 million in additional funding for the 2020 election, half from Zuckerberg, half from Congress via the Coronavirus Aid, Relief, and Economic Security Act.

Paper supplies were hurt by Covid-19 lockdowns as much as any industry, but don’t be fooled by this ruse. The left’s real objective is codifying vote-by-mail policies hastily adopted amid Covid-19 in 2020. Mail-in ballots, after all, are printed on paper. The paper industry has been declining for decades and the commodity crunch is a short-term problem.

Following CTCL’s lead, President Biden offered $10 billion over the next decade for election infrastructure as part of his proposed 2023 budget. Half of that amount, $5 billion, would go to the U.S. Postal Service to “boost delivery capacity” of mail-in ballots “in underserved areas,” making them postage-free (read: entirely taxpayer-funded).

Democrats believe that vote by mail will help the party in future elections, which is probably why Biden appointed Amber McReynolds to the U.S. Postal Service governing board one month after taking office in 2021. Until recently, McReynolds was head of the National Vote at Home Institute and “the country’s most outspoken evangelist for voting by mail,” according to Time.

McReynolds got her start in left-wing activism registering likely Democratic voters ahead of the 2004 election for the Public Interest Network. National Vote at Home Institute operative Michael Spitzer-Rubenstein practically ran the election office in Green Bay, Wisconsin, in 2020 to Biden’s benefit. And the group is funded by the postal workers union. Yet this self-proclaimed “independent” gives Democrats a quiet majority on the board responsible for how our mail is delivered—and increasingly how our elections are managed.

Besides CTCL, the Alliance for Election Excellence is run by a bevy of leftist nonprofits playing at “good government” groups. Although it calls itself “bipartisan,” the Center for Secure and Modern Elections (CSME) is a front for Arabella Advisors’ $1.67 billion network, the most powerful liberal lobbying force in Washington. CSME has lobbied for automatic voter registration across the country and hired Democratic consultants to help funnel Zuck bucks to county elections officials in at least two states in 2020.

The Center for Civic Design uses funding from liberal eBay billionaire Pierre Omidyar to redesign the layout of ballots to help Democratic turnout, particularly among non-English speakers. One of its key recommendations to policymakers: permanent vote by mail, with advice from its partner the National Vote at Home Institute.

Long before the alliance was announced, CTCL, the Center for Civic Design, and National Vote at Home Institute fitted up with another cog: the Elections Group, which offers “guidance” to lawmakers on how to implement all-mail elections systems, including taxpayer-funded drop boxes meant to bypass the Postal Service bins (something CTCL’s Zuck bucks paid for in 2020) and ballot curing.

Biden considered the Elections Group and CTCL key allies on the campaign trail. What about in the White House? At least part of the funding for this campaign reportedly comes from former eBay president Jeff Skoll, a little-known donor to left-wing causes whose film company, Participant, has produced 99%: The Occupy Wall Street Collaborative Film and Al Gore’s An Inconvenient Truth.

In 2020, the Skoll Foundation bestowed its annual Skoll Awards for Social Innovation, which it gives to encourage “transformational social change,” to CTCL’s three co-founders: Tiana Epps-Johnson, Whitney May, and Donny Bridges. Questions remain, but what’s clear so far is that this campaign to centralize America’s elections is an all-hands-on-deck project for the activist class.

Conservatives are right to celebrate CTCL’s withdrawal from its 2020 election strategy—the plan partially backfired, seating Biden but spurring 18 Republican-led states to ban private funding for elections and overhaul local election security, with more on the way. But CTCL and its left-wing donors are advancing, not retreating. Conservatives must respond to save our nation’s elections.

This article originally appeared in The American Conservative on April 27, 2022