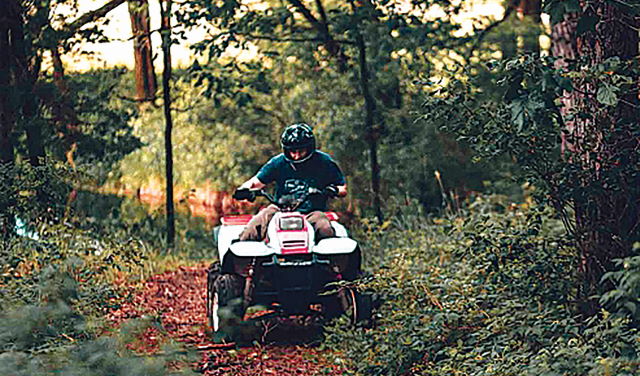 Brian Hawthorne and I were both Westerners, raised in “resource” towns, and both loved cross-country motorcycle trail riding. Credit: fwp.mt.gov License: https://bit.ly/3nRWMQT.
by Dave Skinner

“Who the hell is Responsible Trails America?” was the long-distance question posed to me 14 years ago by my Idaho motorcycle-riding buddy Brian Hawthorne.

Brian and I had worked together in the Western “multiple use” arena in the early 1990s. We were both Westerners, raised in “resource” towns, and both loved cross-country motorcycle trail riding. While we worked for different entities, both were grassroots organizations, funded by living, breathing members scattered across multiple states. Of course, as with almost all legitimate grassroots politics, money was tight to nonexistent. But we had members who would show up in droves when we asked. It was fun, and hard.

Our common interests set up a lasting friendship. By the time of Brian’s fateful call in 2008, I’d moved on to other interests (Pacific Northwest forestry), but Brian was still with BlueRibbon Coalition, an advocacy group for motorcycle trail riders that is still in business.

Brian is now a transcontinental long-haul trucker (it pays better and is less stressful), but we still routinely talk motorcycles and political “shop.” We also discuss a certain chain of political insanities that link straight back to Brian’s innocent question way back when.

My first response to Brian was, “Dang if I know, but I bet Google does. I’ll take a look.” What hid at the bottom of Google’s wormhole? A tiny green beast with the silliest, most pompous name: Arabella Legacy Fund. Arabella was controlled by Eric Kessler, a left-wing campus-radical automotive-trust-fund millionaire baby, who in turn is a close relative of my very own trust-fund millionaire, left-wing Montana state senator at the time, Dan Weinberg. Small world?

Well, it gets smaller. Dan, a Democrat, had just withdrawn from his re-election campaign because hometown hero of Whitefish, Montana, and retired Navy SEAL Ryan Zinke had filed to run as a Republican against Dan. Yep, THAT Ryan Zinke, who became a U.S. congressman and secretary of interior and is now hoping to go back to Congress.

After perhaps three hours, I called Brian back and told him Responsible Trails America (RTA) ranked with the lamest astroturf I’d ever run across, a cheesy copycat of other progressive “media narrative” efforts, Gosh, it was bad, but . . . some serious money was involved.

Mr. Hawthorne asked me to slam together a report for BlueRibbon, which still can be found (archived) on the internet. Something that seems farsighted now: “[A]s a “strategic advisor” to some major foundations, [Eric] Kessler is in a position to ‘advise’ the plowing of major money into a major campaign of deception to close your roads and trails.”

At the top of the Arabella pyramid is Kessler’s consulting firm, Arabella Advisors LLC, which provides boutique services to well-heeled donors and advice to left-leaning foundations on how to give away their money (mostly to political causes). Kessler & Co. command four in-house nonprofits, all with vague names and the same address in Washington, DC. Three are 501(c)(3)s: New Venture Fund, Hopewell Fund, and Windward Fund. The fourth, Sixteen Thirty Fund, is a 501(c)(4).

The advantage to big-dollar donors is obvious: The Arabella pyramid enables donors to fund the “progressive” political causes they want without being seen to wade into grubby activism.

And fund it they do. Between Arabella’s founding in 2005 and 2020, Kessler’s empire pulled in an amazing $4.7 billion, nearly all of it flowing to countless DC policy and litigation nonprofits, exclusively on the Left. Much of that money also sponsored hundreds of “pop-up” groups, so called because they are little more than websites designed to look like standalone nonprofits when really they’re a front for a (usually unmentioned) Arabella group.

And it all began in the middle of nowhere, with Responsible Trails America.

In the next installment, Arabella Advisors began with capturing a tiny federal program in Montana.