Showtime’s The Lincoln Project: Weaponizing Attack Ads Against Your Donor Base 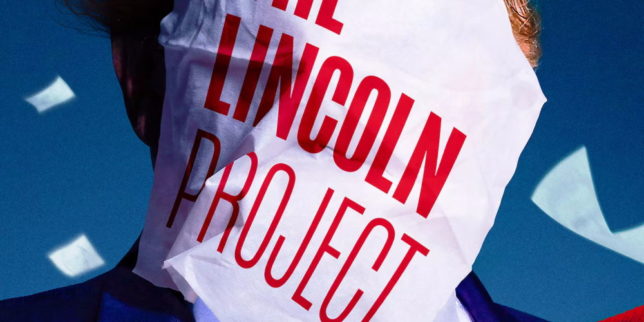 Just in time for the midterm election, Showtime is streaming The Lincoln Project. The five-part documentary profiles the controversial pro-Democratic super PAC created for the 2020 election by what became a feuding and scandalized cabal of former Republican consultants.

Each episode is worthy of its own analysis, and those will post over the next few days in blogs following this brief introduction of the series. Consider these to be a viewer’s guide, providing details not available to the Lincoln Project staff and management as their story unfolds on screen.

The 529,578 people who gave almost $91 million to the Lincoln Project over the 2020 election cycle are the real stars of the series . . . and the target audience. Subtly making this point, Showtime provides a running tally of their donations scrolling on the screen.

It is difficult to pull off an effective political attack ad. The assault needs a compelling issue, persuasive language and images, and a careful aim at the comparatively small number of undecided voters who decide close elections. A campaign needs to work smartly and invest wisely to find and listen to the people it hopes to reach. The messages require nuance, soft words to hide the sharp corners, and a lack of clear partisanship.

Few do this well, and fewer still have access to the funding needed to pull it off. Every election season demonstrates the mismatch of marrying big money to bad attack ads that flood mailboxes and run incessantly on television for weeks, as if emptiness can be cured with repetition.

The genius of the Lincoln Project was that it was built to deliberately steer around this pitfall, but without following the tough lesson plan. What they accomplished was malignantly brilliant and original.

At The Lincoln Project, we did not conduct one poll, test one ad, or hold one focus group. We entered this battle with the conviction that Donald Trump and Trumpism were threats to what it meant to be an American. We did not need numbers to remind us of our deeply held beliefs.

In other words, though the Lincoln Project staff claims otherwise throughout the Showtime series, their assault wasn’t aimed at swing voters.

Instead, they defined their target as Donald Trump: “The Audience of One.” More than 300 video spots married high production values to viciously negative messages that were often clever, albeit in a deliberately nasty sort of way:

We moved fast, hit hard, taunted, mocked, disrupted, and destroyed in a way that no Democratic campaign could operate. We didn’t care about running a politically correct campaign. In fact, we thought the tendency of the political class to be too polite was one of the reasons Trump had never been stopped.

The videos were viewed in their entirety more than 60 million times. Trump frequently reacted in person and via his once relentless use of Twitter. The Stewardship Report claims this was proof that they “got under Trump’s skin like no one had done before.”

But there’s obviously no magic needed to get Trump to unleash abrasive commentary. If another party starts the fight, then the outcome is even more reliable.

In truth, not even Trump or his supporters were the real target audience for the Lincoln Project’s attacks. Trump & Co. were instead the bait used hook the real target: the tens of millions of Trump haters . . . and their money.

Rather than doing the hard and expensive work of developing effective messaging to persuade the unpersuaded, the Lincoln Project cleverly paved a far easier path by using red meat language to impress the already convinced.

The professionally produced abrasive videos were aimed at and shared relentlessly on social media by Trump haters. Trump helped by reacting to the tumult, driving view counts into the millions, and reinforcing the false impression that important minds were being changed. Donations rolled in by the tens of millions of dollars. More videos were produced. Rinse, repeat, cash the checks.

Even in a wide field with many contestants, this was an unprecedented grift in the annals of American political history. The Lincoln Project’s deviously brilliant innovation was to be the first to weaponize the conventional attack ad against their own donor base.

The marks ate it up and begged to get hit again.

This was a worthy subject for a documentary soon after the Lincoln Project’s controversies and scandals became public. But remarkably, Showtime’s The Lincoln Project is told as it happens. Donors who are still unconvinced that they have been fleeced should ask why the supposedly savvy political professionals thought it was a clever idea to invite in cameras they could not control to film their behavior over the last two months of the campaign.

Perhaps there was another agenda at work, an attempt at a lucrative public relations coup, and it backfired?

What Showtime provides is an ugly and engrossing tale about the Lincoln Project told entirely by the subjects themselves, with nearly zero editorializing by the filmmakers.

Next up, an analysis of Episode 1: The Gunslingers.