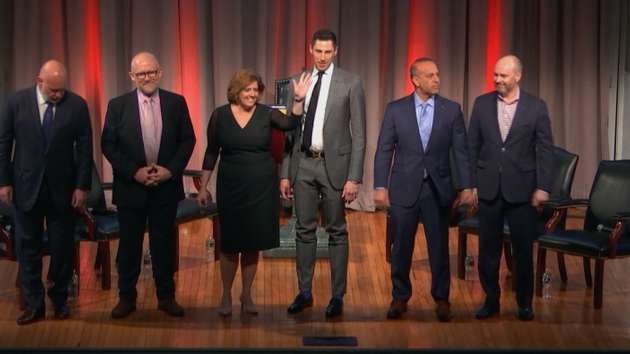 “I believe that we’re in a civil war now,” said Lincoln Project co-founder Rick Wilson late in Episode 4 of the Showtime mini-series about his group.

He was commenting on the January 6, 2021, riot on Capitol Hill and inside the U.S. Capitol. As was done with many exquisitely placed quotes, the filmmakers dropped this hyperbole into a spot where it hit with an ironic double meaning.

A violent half-wit mob of law-breaking malcontents storming the capitol for a few hours wasn’t a “civil war,” either metaphorically or literally. But understood as a business analogy, “civil war” was an accurate description of the angry battle for control of the Lincoln Project that was occurring as Wilson said those words.

Sharp divisions within the group and the nation were the overarching theme of the episode.

One division is the contrasting views by the Lincoln Project staff and leadership regarding what—if anything—they had just accomplished.

He was speaking of the three Senate races where the Lincoln Project spent a disproportionate amount of money. These were supposed to be proof-of-concept affairs, where the former Republicans who co-founded the group could demonstrate they knew what they were doing—that they knew how to pick out and pick off vulnerable Republicans.

Despite being outspent by their opponents, Sullivan won by a commanding 12.7 percentage points, Graham by 10.2, and Daines by 10. Unmentioned in the film was another $464,046 burned up by the Lincoln Project in a futile effort against then-Senate Majority Leader Mitch McConnell (R-KY), who won by almost 20 percentage points.

These total wipeouts in races where Lincoln Project money had a disproportionately larger influence raised obvious concerns about whether the group’s work in the presidential race had made any impact at all.

“That’s uncomfortable to sit with,” said the dejected digital strategist about all this gold they had turned to dust in the senate races. “It’s not what we tell ourselves about ourselves.”

“If this organization did not begin, Donald Trump would have been re-elected,” boasted co-founder Steve Schmidt, in a moment of self-adulation near the end of the episode.

An accounting of how the money was spent became a big concern for the co-founders who later found themselves on the losing side of the internal war for control: Mike Madrid, Jennifer Horn, and Ron Steslow.

As shown in an early episode, co-founders Wilson, Schmidt, Reed Galen, and Stuart Stevens embarked on a controversial decision to turn the group into a for-profit media enterprise. In Episode 4, a comical cavalcade of contradictions and accusations ensued as they set out to implement the plan.

Wilson tells the interviewer that incorporation papers creating the Lincoln Project originally had only three corporate officers: Madrid, Steslow, and Galen. In an earlier episode, as the group is making a case about their supposedly diverse leadership, Wilson said definitively—in reference to Horn—that the Lincoln Project had a woman co-founder.

Why are Wilson and Schmidt missing from the founding documents? The pair offered the filmmakers some convoluted explanations. Even more bizarrely, they asserted that Steslow, Madrid, and Horn were merely high-placed employees, never co-founders at all.

Wilson and Schmidt don’t make a convincing case for either assertion. But equally inscrutable is the explanation (or lack thereof) of how Madrid, Steslow, and Horn all ended up on the outside of the group as it transformed into a media project.

FEC reports show almost $27 million of the $87.4 million raised by the Lincoln Project in the 2020 cycle was paid to Summit Strategic Communications, a firm owned by Galen. Analyzing this in one interview, Jennifer Horn said she had accounted for most of the media buys, payroll, and major expenses in the campaign through the other line items, and that she had no good explanation for the big chunk of money sent to Galen’s firm.

“Summit Strategies did not serve a function to the campaign,” she concluded. “Was that just the four of them splitting up the money?”

In rebuttal, Galen claimed some of the firms making media buys for the campaign didn’t wish to be publicly associated with the Lincoln Project. So he said he routed payment through his own firm to deliberately conceal the names of these contractors on FEC reports.

This explanation landed him in a rhetorical cul-de-sac: We should believe he had nothing to hide because he admitted that . . . he was hiding something.

The otherwise admirable decision by the filmmakers to let the testimony of the participants drive the story becomes a liability at times in Episode 4. A more aggressive editorial intervention might have led the people behind the camera to seek an instant reaction to this follow up question: “Were those hidden subcontractors named or associated with Wilson, Schmidt, and Stevens?”

The accounts provided in the episode by all participants are vague on details and terms regarding how their professional divorce occurred, but Steslow and Madrid ended up agreeing to terms to separate themselves from their connection to the Lincoln Project.

This didn’t stop the sniping.

In a particularly petty scene, Wilson boasted that Steslow and Madrid sold themselves too cheaply in the negotiations. Of Madrid, Wilson taunted that “Mike could have sustained a role in something that grew enormously, but it turned out that he wasn’t really built for the big game.”

Instead, according to Wilson, Madrid offered to sell the seat on the Lincoln Project board for “less than a million dollars” even though it “could have been worth much more to him.”

A furious Madrid countered: “If I wanted money, I would have kept the damn thing and beat the damn email list—like they’re gonna—like a rented [expletive deleted] mule and made millions of dollars just by grifting in the way that they did and I would have made fifty times more money.”

The “grifter” accusation had already been made by many of the Lincoln Project’s critics in an earlier episode.

At home and in a quieter mood toward the end of the episode, Madrid tells the filmmakers there is “something addicting about outrage.”

As Madrid’s voice continued, the screen filled with angry Twitter statements from Wilson, Schmidt, Galen, and Stevens. In each case, the Lincoln Project co-founders were taunting, insulting, and even threatening Republicans.

In one infamous example from January 2021, Stuart Stevens unveiled the Lincoln Project’s enemies list: “At @ProjectLincoln we are constructing a database of Trump officials & staff that will detail their roles in the Trump administration & track where the are now. No personal info, only professional. But they will be held accountable & not allowed to pretend they were not involved.”

As this creepy statement appeared, Madrid’s voice shifted gears and conceded that all political campaigns trade in outrage, even those he had been responsible for.

At a certain point we all have an obligation to say: Is making money out of an outrage machine helping democracy or is it hurting it? And after 30 years, does that wear on your soul?

Madrid concluded that yes, it had definitely worn on his.

For further information, please see the Influence Watch profile of the Lincoln Project and these additional resources: