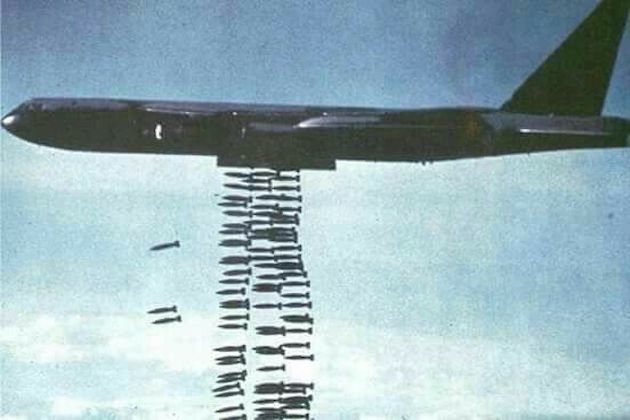 B-52Ds were modified in 1966 to carry 108, 500-lb bombs while the normal conventional payload before was only 51. Credit: Public domain.
by Hayden Ludwig

Democrats had no shortage of left-wing “dark money” groups at their backs in the 2020 election. Chief among them was the Sixteen Thirty Fund, a 501(c)(4) advocacy group and the in-house lobbying shop for a $635 million activist network run by the consultancy Arabella Advisors, which was exposed in CRC’s recent report The Shadow over America.

Since that report was released, the numbers have only grown. According to the recently acquired Form 990 filings for each of Arabella’s four nonprofits, the “dark money” network raked in $731 million in 2019—a $95 million increase over its 2018 revenues and an order of magnitude larger than the $54 million increase in total revenue between 2017 and 2018. And it spent $648 million. That’s about $200 million more than the Democratic National Committee (DNC) spent in the 2019–2020 election cycle.

Even liberal Politico has remarked on the $140 million that the Sixteen Thirty Fund raised in 2019, calling the group a “dark-money behemoth” and “one of the Left’s biggest financial hubs.”

The Arabella groups’ Form 990 filings for 2020 won’t be released until late 2021, but its spending figures for the 2020 election are already available at InfluenceWatch.

Sixteen Thirty paid $4,347,673 in electioneering communications (political ads) in 2020, all channeled through three of its top “pop-up” groups (websites made to look like fully fledged activist organizations): Demand Justice, Health Care Voter, and Protect Our Care.

Health Care Voter and Protect Our Care and are run by Brad Woodhouse, a veteran Democratic operative who previously led the attack PAC American Bridge 21st Century, the DNC, and Americans United for Change. And his salary shows it: Sixteen Thirty paid Woodhouse $203,992 in 2019 to work just 16 hours per week, which amounts to just over $245 per hour.

Then there’s the roughly the $234,000 in Facebook ads run through a handful of its “pop-ups” in 2020 that CRC has traced back to the Sixteen Thirty Fund. The real figure is likely much higher.

In 2019, during the lead-up to the 2020 election, Sixteen Thirty spent $13.2 million on political campaign activities in grants to major left-wing PACs:

But that pales next to the $44 million Sixteen Thirty donated to left-wing PACs in 2020. Here are a few highlights:

Add to that the $300,000 Sixteen Thirty paid to the Lincoln Project, a “Never Trump” super PAC widely loathed by conservatives and declared a “giant grift” by the Left for blowing millions of dollars from liberal donors attacking Republicans in in down-ballot races and another $20 million on shady operating expenses.

There’s much more to come on uncovering Arabella’s activities in 2019. Stay tuned.