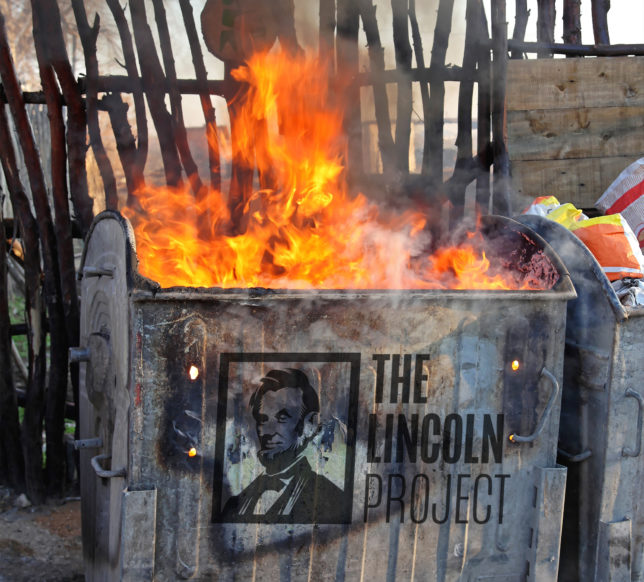 The Lincoln Project put out a self-serving parodical statement reminiscent of General Eisenhower’s announcement of the end of World War II in Europe when the networks affirmed that Joe Biden had won the 2020 presidential election, as if it had won some sort of war. Surely its organizers hoped that the millions of dollars it had received in the 2020 election cycle would keep flowing, with big-shot Democratic donors and PACs pouring cash into their coffers and by extension, their for-profit political consultancies and ad-making firms. There would also be media hits on any MSNBC or CNN program as the “Good Republicans,” who agreed with whatever left-wing special-interest-service the Biden administration happened to be doing at any given time and who stood ready to condemn any Republican who didn’t sing from the hymnal of the Democratic vanguard.

Other Than That, Mr. Weaver, How Was the Newspaper?

But a hooker is paid to leave, not to stick around. And so after a writer at the American Conservative started circulating reports that young men seeking work in politics had received apparent solicitations of a romantic nature from Lincoln Project co-founder John Weaver, the Lincoln Project all of a sudden started facing scrutiny from the mainstream press. That scrutiny showed two things. First, the reports of Weaver’s misbehavior were well-substantiated, and the misbehavior itself was allegedly widespread, with the New York Times reporting that 21 men accused Weaver of harassing them online.

Second, the Associated Press found—long after other observers who had read Lincoln Project’s FEC reports or our InfluenceWatch profile on the Lincoln Project had found—that golly gee Willikers it sure seems like those Lincoln boys sure spend a lot of their money at companies they control! And lo, the AP reports that “public records reveal that the unexpected success of the Lincoln Project has extended a lifeline to some founders who have spent much of the past decade under financial distress.” Like Capt. Louis Renault in Casablanca, the AP is shocked, shocked to find grifting going on in here.

The Lincoln Project’s post-election modus operandi has been ginning up online pressure campaigns against Republicans and Republican supporters not sufficiently enthusiastic about the new Biden administration. In the spirit of Saul Alinsky’s Rule Number Four (“Make the enemy live up to its own book of rules”), let us take a look at the people and committees who have done so much to relieve the “financial distress” of the band of political losers who formed the Lincoln Project.

And then there were the persons who enabled Weaver and company in their personal capacities. As we have noted in the past, the individual donors to Lincoln Project have been a murderers’ row of high-powered Democratic funders: billionaire hedge fund manager Stephen Mandel, film producer David Geffen, billionaire Getty oil fortune heir Gordon Getty, Hollywood producer Jeffrey Katzenberg, longtime actor-activist Rob Reiner, and countless others.

The conceit of the Lincoln Project—it’s right there in the name—was always that it and the mercenaries who led it were placing their “principles” and “country” above the political party they once claimed to represent. But the group’s financial records and the increasing evidence that one of its co-founders was using his position to canvass for young men to groom demonstrate that those supposed “principles” did not go nearly as far as its leaders claimed that they did.