What Killed Michael Brown?: Going to War with Amazon 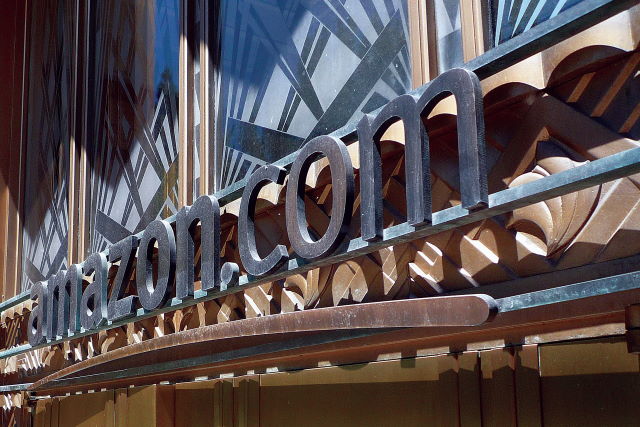 “Amazon just gave Black Lives Matter . . . $10 million. Wow. What for? Who gets that money? What is it? Well, it’s white guilt money, because what Amazon wants to do is say, ’We’re not racist, and $10 million is nothing to us.’”—Shelby Steele. Credit: simone.brunozzi. License: https://bit.ly/37C0Hd0.
by Joseph (Jake) Klein

KLEIN: A lot of our viewers might be familiar with the background. Do you want to tell us what exactly happened with Amazon?

ELI STEELE: We wanted to get the film out before the election because we figured that race would be a discussion. And Amazon—all the platforms, iTunes and so forth—has a shorter window, two or three weeks. So we submit it, and after two days, we were put into content review. And basically, the criteria for that are four things, which is offensive content and then three other things, like public domain, things that we’d never qualify or fit into. There’s really no reason to put us into that. They held us in content review for quite a long time, then on October 13, we got a letter from Amazon that basically said, “Your documentary has been rejected. It does not qualify for resubmission,” and to kind of put the lock on everything, “You cannot appeal.” So it was a 300 percent rejection.

Then most Americans, if an opportunity closes, you look for somebody else, so we moved on. We just said, “Okay, forget it,” and we went onto Vimeo, or whatever it’s called, and got the film on there. While we were doing that we had massive publicity with the Wall Street Journal, Fox News, and National Review and several other publications that came to our defense and raised our cry over why we had been canceled by Amazon. I’m sure once you see the movie, you’re not going to see any quality issues with the film, and you’ll say, “Why had we been rejected?”

Then on Friday, Amazon puts the film on the platform, without notifying any of us. And so, you can’t do that, because once you say no, you forfeit all rights to the property, to the intellectual property. So basically, you’re putting it up there and taking 50% and I had no idea. So we issued… our lawyers told us to have a cease and desist and take it down. And so they did. They did this on Sunday. And then on Tuesday they reached out again, and we had a conversation, we exchanged emails, and basically I told my side of the story, they said they’re side of the story. They’re a corporation so they’re never going to admit what happened. But the admitted, basically, that they need to improve things on their side, the way the whole process works.

And I remain convinced that the only possible explanation for why we, of all the films, were pulled into content review was politics. I mean we have a title that’s called What Killed Michael Brown? Oh, and then Amazon claimed that they sent a letter by mistake. That’s a pretty big mistake to make. That’s too many coincidences, too many things. Like one coincidence, maybe, but not two or three. And so obviously that leads me to believe that it’s really political. But it shows the power of the voice. We have a lot of fans, customers calling Amazon and leaving messages. At first, I was like, “Yeah, that’s really going to have an impact.” But then once I started getting the emails and seeing on Twitter, seeing on Facebook, and I was like, “Oh wow, okay. These people really know that people are calling and protesting.” So now we’re on Amazon, and it’s been a great platform. I mean, it’s a huge platform. It’s the only way we could get the message out.

SHELBY STEELE: So we had our moment of glory. Our David and Goliath. We were David for a moment.

ELI STEELE: I made the film in my bedroom. I live in a small apartment. I get off my bed. I walk like two steps and make the film. I edit it. We communicate over FaceTime and then we have to all of a sudden go to war with Amazon.

KLEIN: Well, anytime they do something like that, they always call it a mistake. When we get into issues with YouTube or any other social media companies and then we have to put pressure on them. It’s always, “Oh, it was a mistake. We didn’t mean to do it.” Every single time. Luckily for you guys you had the Wall Street Journal on your side, and you have Shelby who has a lot of recognition in the public and can go out and get attention. And you have the Streisand effect, where the harder they try to bury something, the more people just want to go and see it. So you guys are the winners.

ELI STEELE: But imagine if I didn’t have my father. What power would I have? That’s what’s so damaging about Amazon, because I think they underestimated us. They didn’t really understand the leverage that we could bring. But that very damaging to artistry because the whole point of an artist is to go where other people don’t want to go. But why would you spend two and a half years making a movie, if I’m not going to be able to platform it? That’s why it’s a huge issue. And if we had the fear in the beginning, “You know what? It’d be too controversial for Amazon.” Well, then you would never have a film of public record that opposes the popular narrative.

KLEIN: Yeah. It’s the same thing we get our content censored, is they’ll always fix it for us, but I want to keep fighting, because what if I didn’t have a known organization with a budget behind me, what if I was just some independent content producer? We’d never be able to get anything done.

Okay, I know we ran a little bit over time, I had a bunch of other questions I wanted to ask you guys, Eli, do you want to remind people where they can see the film? Anything else you want them to know about it?

ELI STEELE: The best place to see the film or get all the information is whatkilledmichaelbrown.com. Everything’s there.

KLEIN: All right. Thank you, guys, so much. It’s a really great film. Definitely go to that website. Watch it. Thank you so much.

SHELBY STEELE: Thank you so much for having us and good luck to you in your endeavors.