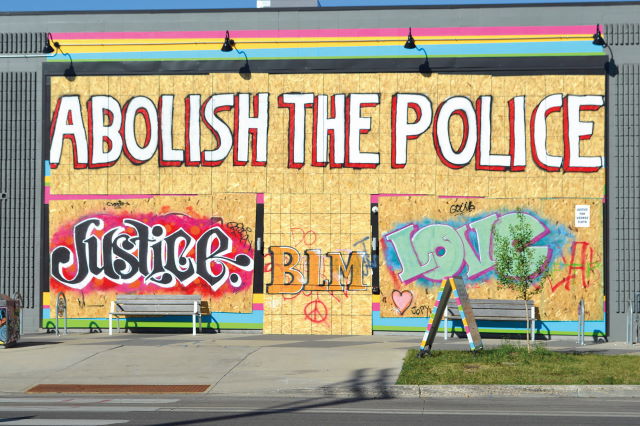 “Just think about the ’defund the police.’ If you went into Ferguson and told them that we want to take away the police, what do you think they would say? No, they don’t want to get rid of the police. So that’s what Black Lives Matter is. It’s all these big ideas, but there’s no real grounding in reality.”—Eli Steele. Credit: Renoir Gaither. https://bit.ly/2KPv06P.
by Joseph (Jake) Klein

KLEIN: Well, let’s talk about the George Floyd stuff real quick before we wrap up. Well, first of all, this film is coming out at the perfect time, because of what happened this year, as tragic as it is. I’m glad that we have this film to think about in the wake of it. So we put out, on our YouTube channel, a video about the Black Lives Matter movement in the wake of the events with George Floyd and all the protests that happened in the summer. We did it with our mutual friend, Bob Woodson; he narrated that video for us. And it goes through all the things that Black Lives Matter thinks, but you don’t always hear in the protests, but they’ll say very openly on their websites that police brutality isn’t their only or main cause. They want to abolish capitalism. They praise Fidel Castro. They want to abolish police and prisons. They want to replace the nuclear family with communal child raising, like they had in the early Soviet Union or on Israeli kibbutzes, both of which were very failed experiments.

Yet, after the events with Michael Brown and after the events with George Floyd, we see this organization and this movement rising to insane heights. I mean, we listed at the end of our video, all the major corporations that gave money to the official Black Lives Matter organization even though they support all that stuff. And I mean, you wouldn’t believe it. The Pokemon company supports Black Lives Matter financially. That’s nuts.

SHELBY STEELE: Because they want their imprimatur of racial innocence.

KLEIN: Do you think that most of the people that are being big activists on this cause right now, do they know about all the stuff that Black Lives Matter actually supports? Or do they know, and they just don’t care?

ELI STEELE: Well, now some of them, one of them said, “Did you know that the police began the slave patrol?” But the point is, that person never knew that. So when you’re giving new pieces of information to that person, they just blow it way up and they conflate it, 200 years and flatten that into every cop is a direct descendant of slave patrol. So that’s the sort of the naivete in the way they’re thinking.

Just think about the defund the police. If you went into Ferguson and told them that we want to take away the police, what do you think they would say? Think of the place where Michael Brown was shot. No, they don’t want to get rid of the police. The crime is up and everything after Michael Brown was shot. So that’s what Black Lives Matter is. It’s all these big ideas, but there’s no real grounding in reality.

SHELBY STEELE: Excuse me, $10 million. Wow. What for? Who gets that money? What is it? Well, it’s white guilt money, because what Amazon wants to do is say, “We’re not racist, and $10 million is nothing to us.” And so, Black Lives Matter then takes $10 million and has a good time with it. Our culture has come to the place in America where we basically exist to shake down America. Our future in getting ahead, we’re not going to get ahead through innovation and hard work, we’re going to get ahead through shake down. So they love black victimization, they love that Michael Brown was killed by a white cop. It’s money in the bank for them. Well, that’s the race as a means to power. Race as to means to power for whites who then can say, “I’m not guilty anymore.” And race as a means to power to blacks who say, “I’m more entitled than I ever was, and there are not enough reparations.” There never will be.

SHELBY STEELE: That’s pretty good. I think that’s right on the money. They don’t care to find out. They don’t want to find out. That’s why Amazon canceled us. They’re not saying it’s not true. They just don’t want it out there. Thankfully they’ve retreated, so I give them credit for that.

KLEIN: I didn’t even think to ask you guys about that.

SHELBY STEELE: We’re up against that denial. Both sides are trying to say, “Don’t look at the real us.”

ELI STEELE: We have nothing to offer Amazon. We have nothing to offer Amazon, if you think about that. Our vision, our view, it offers nobody anything except basically a reality check. It tells you this is what happened, here we are. Black Lives Matter offers you two things, animus or you get racial forgiveness. So if you reject Black Lives Matter, you’re on the other side, you’re Uncle Tom, you’re a coon. If you accept them, then you get that badge that you’re not a racist, that you’re being an anti-racist. That’s an enormous power to have. And we, because of our position, we don’t offer anybody anything, so that’s why people just ignore us and walk over us. So that’s enormous psychological power that Black Lives Matter has, and any black has.

SHELBY STEELE: We want Americans to stop allowing themselves to be blackmailed.

In the next installment of “What Killed Michael Brown?,” the filmmakers recount having to go to “war” with Amazon.