Patient Power Is Dead: Labor Unions and the ACA 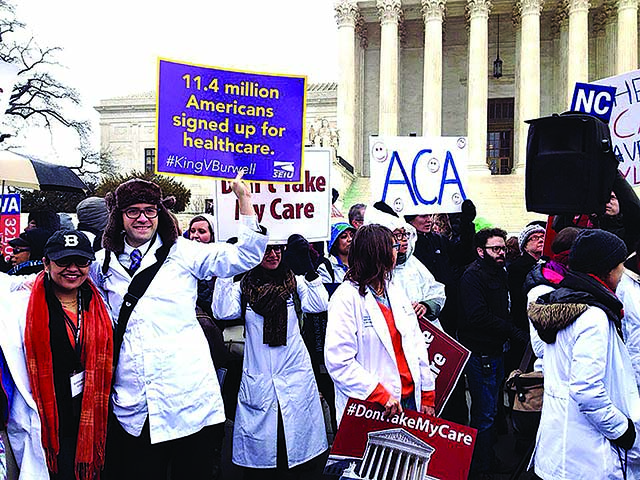 According to the Post: “The demonstrations were to follow a meeting described as a National Town Hall Meeting on Health Care. . . . Organizers included the Center for Popular Democracy, Housing Works, National Nurses United and Health Care for America Now, among others.” Nine days earlier, another incursion into congressional office buildings over the same issue resulted in 80 arrests. Credit: LaDawna Howard. License: https://bit.ly/34Pgd6z.
by Ken Braun

Labor Unions and the ACA

While large in number, these supporters of single-payer schemes such as Medicare for All remain (though not always) the most left-leaning of the nonprofits, unions, political committees, and Democrats.

In an even more crowded and better-funded corner, the conventional center-left has preferred instead to promote the status quo of supporting Obamacare while gradually ramping up government control by expanding Medicaid to more recipients. Rather than quickly handing over control of nearly every health care dollar to government with Medicare for All, the establishment Left would rather sneak up on the takeover.

President Joseph Biden’s photo could be in the encyclopedia entry for this group. During the 2020 presidential campaign, he implied that he would veto a Medicare for All proposal, even if a Democratic Congress approved it and “by some miracle” it reached his desk. The Biden campaign followed up by saying his objective was to “build on the profound benefits of the Affordable Care Act.”

Biden’s position is in line with many of the largest labor unions, such as the Laborers’ International Union of North America (LIUNA). LIUNA reported more than 574,000 members in 2020, dues collections of $92.9 million, and more than $10.6 million spent on politics and lobbying.

A main policy issue of concern listed on the LIUNA national headquarters website is “Protect and Strengthen Healthcare.” The health care issue page states that the “Affordable Care Act was a first step” and that “LIUNA members support further improvements to our healthcare system, including reducing the age for Medicare eligibility, and other expansions of Medicare.”

Importantly, LIUNA’s support is in large measure because the Affordable Care Act still allows exemptions for the gold-plated private health coverage used by unions such as LIUNA. As originally enacted, some of the ACA’s funding would have come from an excise tax of 40 percent on the most expensive private health care policies. In 2018, for example, this “Cadillac Tax” would have applied to every dollar above $27,500 paid for a family health policy. The cost of the average family policy in 2018 was less than $20,00, so the Cadillac Tax applied to a comparatively small number of private health coverage plans.

But those plans are disproportionately used by giant labor unions. This creates the odd spectacle of these unions denouncing Republicans for trying to reform the ACA while simultaneously bragging about their own ability to do exactly that when it suits their needs. LIUNA likes the ACA because—unlike single payer—the union bosses can exempt their unions from it.

LIUNA’s policy position is that the ACA isn’t for its members, but rather for the “millions of Americans” for whom the “healthcare system is severely broken.” LIUNA asserts that its health care is anything but broken, so national website boasts that LIUNA has even “won key improvements to the ACA; including the elimination of onerous taxes, such as the Cadillac Tax and other requirements that would have unfairly impacted union member health plans.”

The healthcare policy position of the 541,000-member United Steelworkers (USW) is almost identical. The USW website states the ACA was “a key moment in expanding health care” but that the USW has “worked to perfect” by advocating changes such as repealing the Cadillac Tax. The USW reported collecting $285 million in dues for 2020 and spending almost $10.5 million on politics and lobbying.

As big offenders when it comes to creating costly health coverage (and stripping multi-billion-dollar chunks of annual revenue from the ACA by helping to repeal the Cadillac Tax) some big unions don’t appear to make national health care policy much of a priority. One example, the webpage for the national headquarters of the International Brotherhood of Teamsters (one of the country’s largest independent unions) doesn’t mention the Affordable Care Act or Medicaid expansion on either the list of the union’s “campaigns” or the page for “political and legislative action.”

But Medicaid expansion (an important ACA provision) is an existentially important issue for unions such as 1199SEIU United Healthcare Workers East. 1199SEIU’s website describes its health care policy objective as to “strengthen the Affordable Care Act and advance legislation that expands access to quality care for all.”

In practice 1199SEIU was almost purpose-built for the ACA’s Medicaid expansion provisions. It has pumped up enormous political muscles by pressuring a succession of New York governors into ramping up Medicaid spending to potentially ruinous levels. A Kaiser Family Foundation analysis revealed New York state Medicaid spending to be $72.9 billion for 2020. The comparison to other states is staggering. Florida and Texas each have larger populations than New York, yet even added together the total 2020 Medicaid budgets for both was $77.9 billion.

According to its annual report for 2020, 1199SEIU had more than 365,000 members, collected $189.1 million in dues, and spent at least $13.6 million on politics and lobbying government. A Manhattan Institute profile declared it to be possibly the largest union local on Earth, and “The Union that Rules New York.”

The following are some other prominent labor groups promoting the ACA and expanding Medicaid:

The union local reported spending an additional $6.5 million on “contributions, gifts and grants,” with a lot of that also going to political objectives such as the Fairness Project, which received $2.5 million. (The Fairness Project reported raising almost $3.7 million in 2019).

According to Think Progress, the AFL-CIO “did officially endorse Medicare for All in 2009.” But in 2019 Richard Trumka, the late president of the AFL-CIO, stated that union-negotiated health coverage plans “provide more benefits than Medicare” and that “You can’t ask the American worker, who sacrificed wages and everything, to simply say: ‘Okay, I’ll accept this plan here.’” Trumka said that the AFL-CIO would only support federal health care changes that provided “a role for those hard, hard-fought-for, high-quality plans that we’ve negotiated.” The most logical interpretation of this position is that it would preserve the small number of multiple “payers” in the current system and thus (regardless of name) would neither be single payer nor Medicare for All.

Through the 2020 presidential election the UAW opposed Republican proposals to reform the Affordable Care Act and accused Republicans of seeking to prevent Americans from receiving health coverage. However, like many large unions, the UAW also opposed some provisions in the Affordable Care Act, such as the Cadillac Tax that would have punished the excessively costly gold-plated coverage that some unions enjoy. The UAW reported 397,000 members in 2020, dues collections of $170.1 million, and nearly $7.9 million spent on political activities and lobbying.

Working America. A “community affiliate” of the AFL-CIO labor union confederation, the Working America website asserts that it “unites working people who don’t have a union on the job” and claims a membership of 3 million. The group claims credit for obtaining Medicaid subsidies for 500,000 people in Pennsylvania and asserts that similar work is being performed in other states. Working America reported spending $18.6 million for the year ending June 30, 2019. The website also states that the Affordable Care Act “was an important first step” but that “some version of “Medicare for All” is the most cost-effective, fairest method of ensuring universal quality health coverage.”

In the next installment, many groups support the Obamacare status quo to protect their current positions.