Patient Power Is Dead: Medicare for All 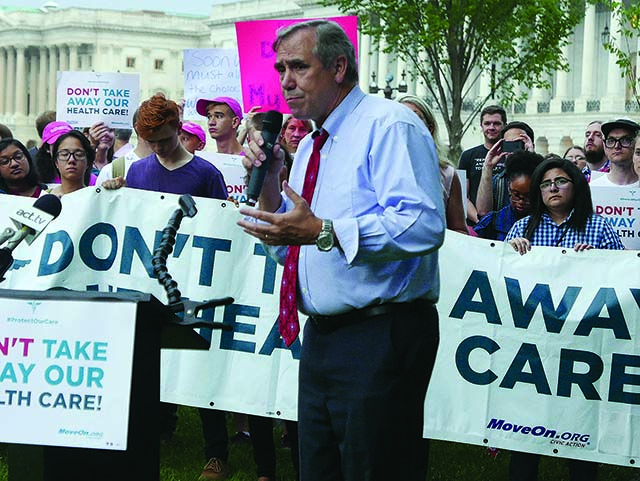 On July 19, 2017, at least 155 demonstrators were arrested by U.S. Capitol Police for creating a coordinated disturbance at U.S. Senate office buildings. The scofflaw infiltration was in response to planning by lawmakers to repeal and replace the Affordable Care Act (i.e., Obamacare). Credit: Susan Melkisethian. License: https://bit.ly/3u9vFTB.
by Ken Braun

The Center for Popular Democracy (CPD), one of organizing groups noted above, is a tax-exempt, charitable nonprofit that reported spending nearly $36.5 million during 2019. The Center for Popular Democracy Action Fund, a political advocacy group affiliated with it, spent almost $7.6 million that year. CPD also advocates for other radical policies such as the Green New Deal.

Two years after the incursion at the congressional offices, the Center for Popular Democracy endorsed Medicare for All, one of many left-leaning nonprofits that have done so.

Over the years several left-wing members of Congress have introduced Medicare for All proposals, the most famous of which was probably introduced by Sen. Bernie Sanders (I-VT). An April 2019 news release from the office of the Vermont socialist listed dozens of nonprofits endorsing his Medicare for All legislation. When promoting her Medicare for All Act of 2021, Rep. Pramila Jayapal (D-WA) listed as supporters many of the same groups.

Some of the more prominent groups appearing on one or both lists included:

Dozens of smaller political and nonprofit groups were also listed as supporters for at least one of the Medicare for All proposals sponsored by Sen. Sanders and Rep. Jayapal, including:

In the next installment, Big Labor is also on Medicare for All bandwagon.