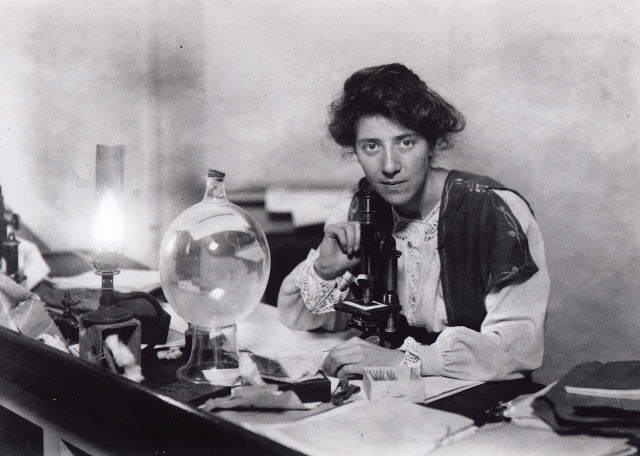 Few Americans have heard of Marie Carmichael Stopes, yet she might be considered the UK’s Margaret Sanger and the face of British family planning and eugenics. Public domain.
by Hayden Ludwig

Few Americans have heard of Marie Carmichael Stopes, yet she might be considered the UK’s Margaret Sanger and the face of British family planning and eugenics.

There are interesting parallels between the women. Sanger and Stopes were born within a year of each other (1879 and 1880, respectively) and were early and outspoken feminists who each married twice. Both were intellectually curious and shared a high view of education: Sanger studied to become a nurse before giving up her educational pursuits after marriage, while Stopes was an accomplished paleobotanist who attended the Universities of London and Munich. Both saw family planning as a way to improve both women’s health and social conditions in an era when the infant mortality rate in America was 99.9 deaths per 1,000 live births (today it’s 5.8) and 70 women died per 10,000 births (now just 1 in 10,000). Both used journalism and activism to advance their political agendas.

Both women had politically active parents interested in contemporary scientific topics. Sanger’s father, Michael Higgins, was a devout socialist who practiced amateur phrenology, the pseudoscience of studying skull shapes to determine one’s profession and intelligence. Henry Stopes practiced paleontology while his wife, Charlotte, was a Shakespearean scholar active in Scottish feminist circles. The pair met through their membership in the British Association for the Advancement of Science.

Margaret Sanger was a lifelong leftist close to the most prominent socialists and Marxists in America, while Stopes was more conservative (at least in contrast to her contemporaries in the Birth Control movement). Yet both women were surprisingly critical of abortion—Stopes outright opposed it—preferring instead to help mothers avoid “compulsory pregnancy” by popularizing contraception.

One of Sanger’s few criticisms of the Soviet Union during her 1934 glamor trip to the workers’ paradise was that the country was encouraging too many abortions. “Four hundred thousand abortions a year indicate women do not want to have so many children,” she told one Soviet doctor. “In my opinion,” she later wrote, “it is a cruel method of dealing with the problem [of unwanted pregnancy] because abortion, no matter how well done, is a terrific nervous strain and an exhausting physical hardship.”

In 1912, Stopes attended the inaugural congress of the British Eugenics Society, where she became a member. She met Sanger a year later at a Fabian Society meeting, a radical socialist organization in Britain that opposed such things as private property. Through the society Stopes was later introduced to prominent British socialists such as the playwright George Bernard Shaw, with whom she frequently corresponded.

Sanger encouraged Stopes’s activism, and in 1913 Stopes published a book on her vision of marriage (made controversial given her then-recent divorce). The book—a bestseller that put Stopes on the national stage—was eventually published with funding from Humphrey Verdon Roe, a philanthropist whom she later married after the two were introduced by the secretary of the pro–population control Malthusian League.

The period between the world wars was the high-water mark of the birth control and eugenics movements, which in many cases fused with the older suffrage movement.

Stopes’s expanded vision of feminism was rooted in helping married women bear only the children they want to bear, rather than risking pregnancy each time they have sex with their husbands. Unlike Sanger, Stopes praised parenthood and marriage: “[E]very lover desires a child. Those who imagine the contrary, and maintain that love is purely selfish, know only of the lesser types of love.”

But it was also tinged by an authoritarian and communal view of “wanton” parenthood and inferior “breeding,” as her allies often put it. “The power of parenthood ought no longer to be exercised by all, however inferior, as an ‘individual right’ [emphasis original],” she wrote in the 1920 book Radiant Motherhood: A Book for Those Who are Creating the Future. “It is profoundly a duty and privilege, and it is essentially the concern of the whole community.

[S]ociety allows the diseased, the racially negligent, the thriftless, the careless, the feeble-minded, the very lowest and worst members of the community, to produce innumerable tens of thousands of stunted, warped, and inferior infants. If they live, a large proportion of these are doomed from their very physical inheritance to be at the best but partly self-supporting, and thus to drain the resources of those classes above them which have a sense of responsibility. The better classes, freed from the cost of the institutions, hospitals, prisons and so on, principally filled by the inferior stock, would be able to afford to enlarge their own families, and at the same time not only to save misery but to multiply a hundredfold the contribution in human life-value to the riches of the State [emphasis added].

In 1921, Stopes and Roe founded the first birth control clinic in the British Empire offering contraception advice to married women, then a highly stigmatized topic. (Interestingly, the clinic—which after her death offered abortion services—shut down exactly a century later in 2021.) Their preferred device was the “Pro-Race cervical cap” sold by the Society for Constructive Birth Control and Racial Progress, which the couple established alongside the clinic in 1921 to “promote eugenic birth control” and block “reckless breeding” among the “unfit.”

The “unfit” included the poor, the disabled, racial minorities, and Jews. One anecdote recalls Stopes refusing to allow Jewish refugees from Nazi Germany to attend a lunch because it would “offend her other guests.”

Stopes attended the 1935 World Population Conference in Berlin along with numerous highly regarded scientists, including Charles Davenport; Harry H. Laughlin of the American Eugenics Society; Theodore Lathrop Stoddard, who coined the term “under-man” (in German, Untermensch) in his writings on white supremacy; and Madison Grant, who believed in conserving natural resources for the benefit of the “Nordic Race” to the exclusion of “lesser” races. A later report published by the conference noted, “Marie Stopes demanded that scientifically trained minds examine the prerequisites for human conception and give directions for regulating them from the point of view of breeding up the human stock.”

In August 1939—one month prior to the outbreak of World War II—Stopes sent Adolf Hitler a copy of her book Love Songs for Young Lovers and a letter: “Dear Herr Hitler, love is the greatest thing in the world: so will you accept from me these that you may allow the young people of your nation to have them?” Ugly as it is, however, Stopes wasn’t really a Nazi sympathizer nor warm to the Soviet Union, and she strongly supported Britain throughout the war. Her prejudices were rather more in-line with those of 19th century conservative, upper-class Britons—one of her unpublished poems reads, “Catholics, Prussians, / The Jews and the Russians, / All are a curse / Or something worse.”

In the next installment, after World War II the eugenics movement evolved into population control.