Birth of the Abortion Industrial Complex: Socialism and Mass Sterilization in India 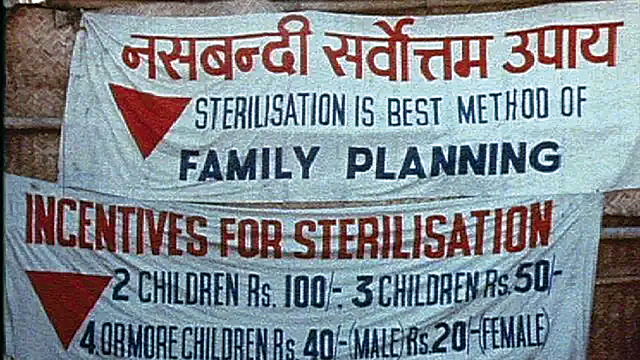 Socialism and Mass Sterilization in India

One of the council’s most infamous targets was India, which became independent from the British Empire in 1947. In 1952, Balfour—whose New York Times obituary remembers him as “active in population control efforts”—became the Population Council’s liaison to the Indian government, where he hoped to curb both overpopulation and possible communist influence. Independent India was socialist but not aligned with the Soviet Union. What followed was an unprecedented campaign of state-sponsored “family planning” led by Prime Minister Jawaharlal Nehru, who believed his 376 million countrymen constituted a severe “population problem.”

Under pressure from Planned Parenthood, the United Nations Fund for Population Activities, the Ford and Rockefeller Foundations, and the Population Council, India’s government paid women to use intra-uterine devices (IUDs) and men to be sterilized. The World Bank loaned India $66 million for sterilization efforts in the 1970s.

Poor harvests in the 1960s only escalated things. President Lyndon Johnson refused to provide food to the famished country until it agreed to incentivize sterilization. Nehru’s daughter and the country’s new prime minister, Indira Gandhi, suspended the constitution in order to institute mass compulsory sterilization campaigns. India’s northern provinces came to be called the “vasectomy belt.”

Villages were ringed with armed police, the men trundled out at sword- and gun-point and told they would be forcibly sterilized per the national quota. No one was allowed to have more than two children. Women had IUDs forcibly inserted. Those who resisted were beaten, loaded onto buses, and brought to hospitals to be sterilized. “Everyone had a number,” one man recalled. “We were taken in a line—one after the other . . . number-wise.”

There are no clear statistics on the number of victims from India’s “emergency,” as the mid-1970s is called, but it probably ranges in the tens of millions. In 1976 alone 6.2 million men were sterilized, 15 times the number sterilized by the Nazis over their 12 years in power.

India was—and remains—the greatest success story in the dark history of population control, yet it’s hardly remembered in the West. It represents the imperial power of Western social engineers, ultra-wealthy foundations, and the amoral ideology of Scientism to destroy the lives of millions in the pursuit of their godless vision of perfection. Even so their plans wouldn’t have gone anywhere if India’s socialist leadership hadn’t permitted a mass eradication of its own people. Amazingly, the Population Council wanted to go even further, with its president suggesting in 1969 that the Indian government ought to distribute a “’fertility control’ agent” in urban water supplies.

This wasn’t philanthropy, but eugenics reborn on a scale that would’ve made the Third Reich blush. It was decades in the making. As early as 1936, Margaret Sanger used the example of “tired,” “pathetic” Indians to justify eugenic ideas in a propagandistic radio address:

I turned to the social worker, ‘Ask this mother how many children she has,’ and I pointed to a woman in a ragged sari squatting on the street and holding a baby in her arms.

“And how many more do you want,” I pursued. She threw out her hands in a pathetic gesture. A look of fear came into her tired, lined face.

By 1952, her message—like eugenics—had evolved. In Bombay, Sanger demanded that the government “see that those who do not have the individual initiative and intelligence to plan and control the size of their families should be assisted, guided, and directed in every way to eliminate the undesirable offspring, who usually contribute nothing to our civilization, but use up the energy and resources of the world.”

Disgust with India’s teeming masses—and powerfully influenced by William Vogt’s overpopulation warnings—also inspired biologist Paul Ehrlich’s notorious 1968 book The Population Bomb, in which he warned that the world would implode from overpopulation by the 1980s unless we adopted extreme socialist and environmentalist policies, including a one-world government to redistribute planetary resources. (He’s since revised our impending doom to a hazier date.) Even leftists at the New Yorker today admit that the environmentalism Ehrlich helped create has a “racist history.”

India’s sterilization campaign never really ended, either, though it’s no longer advanced at the end of a gun. The country sterilized 4 million people between 2013 and 2014, almost all of them women, accounting for 37 percent of the world’s female sterilization in 2011. Of course, the Indian model gave rise to communist China’s infamous one-child policy, enacted in 1980 and ended in 2016.

The Population Council is also still focused on thinning out humanity, but like the rest of the population control movement, it’s morphed into a pro-abortion organization. Today the group brags that it “played an important role in . . . decriminaliz[ing] early abortion in Mexico City.” It retains strong institutional support: Nearly 46 percent ($38.6 million) of its 2016 budget came from the U.S. government, millions more from the United Nations and, naturally, the Rockefeller Foundation.

The Population Council even has a special title for its top-tier donors: “John D. Rockefeller 3rd Visionaries.”

In the next installment, sales from an adult erotica company fund Population Services International, a top abortion and contraception provider in some 60 poor countries.