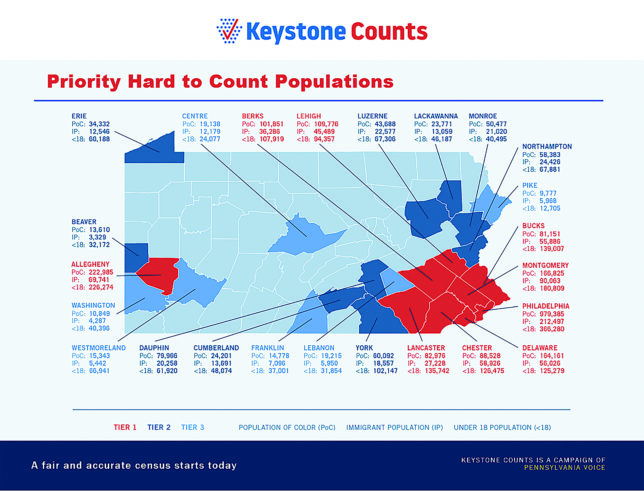 Keystone Counts is the leading campaign in Pennsylvania to boost the number of Democratic-leaning constituencies in the 2020 Census and the redistricting process. It’s run by Pennsylvania Voice, an affiliate of State Voices, one of the most influential national groups coordinating the Left’s strategy in the state.

State Voices is one of the many groups created after the Democrats’ defeat in the 2004 election, with the goal of crafting permanent left-wing infrastructure in battleground states. Consequently, it’s one of the Democracy Alliance’s “recommended organizations,” meaning the collective considers State Voices a key group for all its 2020 efforts and its funding proves it. Since its creation, State Voices has received $43 million in grants from the George Soros-run Open Society, Ford, and Tides Foundations, among liberal heavyweights.

State Voices isn’t shy about its objectives: “The two pillars of our civic representation work are the 2020 Census and fair redistricting in 2021.” The officially “nonpartisan” group plays up traditionally Democratic-leaning constituencies in “Get Out the Count” (GOTC) activities ahead of the census, mirroring partisan “Get Out the Vote” (GOTV) efforts in elections. (Like voter registration, the IRS considers aiding the U.S. Census Bureau in counting people in the census a “charitable” activity for tax-exempt nonprofits.)

In practice, that involves making grants to state-level affiliates such as Pennsylvania Voice. Between 2016 and 2017 State Voices paid out almost $6 million in grants to voter/census turnout groups targeting critical states—such as Minnesota Voice, Blueprint North Carolina, and Pennsylvania Voice—and constituencies, particularly Latinos (through Mi Familia Vota). Those groups in turn trickle part of their funding down to their own network of in-state activists and the use the rest to push likely Democratic voters to support redistricting and the census.

The Philadelphia-based Pennsylvania Voice is run by Erin Casey, a professional activist with a background in astroturf (fake grassroots) campaigns. In the 2018 midterms, her group coordinated 19 other Pennsylvania Voice affiliates to run voter registration drives in 11 counties and reportedly registered 43,000 new “voters of color” and made half-a-million contacts with voters (via text message, robocall, or direct mail).

With the 2020 census looming, the group has pivoted to increasing census counts in 24 counties using dozens of small and mid-level activist groups across Pennsylvania. CRC obtained a PowerPoint presentation by the group intended for donors that reveals an obvious preference for “hard to count populations” in densely populated, historically Democratic-voting counties.

Seven of the nine top-tier counties targeted by Pennsylvania Voice voted for Hillary Clinton in 2016. All of them voted for Democratic Gov. Wolf in the 2018 governor’s race.

Aiding Pennsylvania Voice is Fair Districts PA, a joint project of the League of Women Voters and Common Cause, which advocates for California-style independent redistricting commissions nationwide and in Pennsylvania. The League of Women Voters is nominally centrist, but in fact strongly supports government-run health care, handgun bans, and other liberal policies. Common Cause is one of the leading “fair redistricting” groups on the Left and also targets Republicans for embarrassing ethics violations, including its most famous censure target: Robert Bork in 1985.

And there’s nothing “independent” about such redistricting commissions. As CRC’s Michael Watson has documented, similar redistricting commissions in California, Washington, Idaho, and Arizona have resulted in election outcomes that disproportionately favor one party over another—granting California Democrats, for instance, as much as 10 “extra” seats relative to their party’s statewide proportion!

Two more key PACs are aiding the Left’s effort to permanently control Pennsylvania and key battleground states: Flippable and Swing Left. The two work in tandem. In 2018, New York–based Flippable targeted state legislatures, while the much larger Swing Left aimed at wresting control of the U.S. House of Representatives from the Republicans.

Flippable takes credit for “flipping” the Virginia legislature in 2018, enabling Democrats to enact “pro-democracy policies in 2020 and draw fair maps in 2021”—essentially giving them a 10-year majority in the Old Dominion, until after the 2030 Census. It boasts that since 2016 it has “helped elect 95 Democrats in game-changing states,” resulting in seven state legislative chambers flipping from Republican to Democratic control.

In 2020, it has identified 10 other targets—each a battleground—including Florida, North Carolina, and Pennsylvania. “Until 2018, Pennsylvania’s congressional district map was one of the worst instances of partisan gerrymandering in the nation,” writes Flippable on its website. The new, “temporary” court-drawn maps have boosted Democrats, but they’re set to be redrawn in 2021—so Flippable is targeting the Pennsylvania legislature to ensure a Democratic majority in time for 2021.

Swing Left is more broadly aimed to expanding Democratic control of Congress and beating Trump in 2020. Like Flippable, it’s targeting 12 “super states” in the coming election and is brazen about its goal: drawing “fairer district maps” that ensure “more Democrats are elected in the U.S. House over the next 10 years.”

In Pennsylvania, that comes down to two goals: “1) win the state’s 20 Electoral College votes and 2) break Republican control of the state legislature by flipping one or both chambers.”

In the state Senate, we are currently targeting five districts—four GOP-held seats and one Democratic hold. With only half of the chamber up for election in 2020, our Senate targets are scattered across the state, including Harrisburg, Pittsburgh, Erie, and the Philadelphia suburbs.

In the state House, we are currently targeting 16 districts—13 GOP-held seats and three Democratic holds. Eleven seats are in Southeast Pennsylvania, close to the Philadelphia metro area and surrounding regions. The remaining five targets are located near Harrisburg, Wilkes-Barre, and the Pittsburgh suburbs [emphasis added].

In the next installment of Plans to Flip Pennsylvania, look at the “nonpartisan” nonprofits working to get out the Democratic vote.