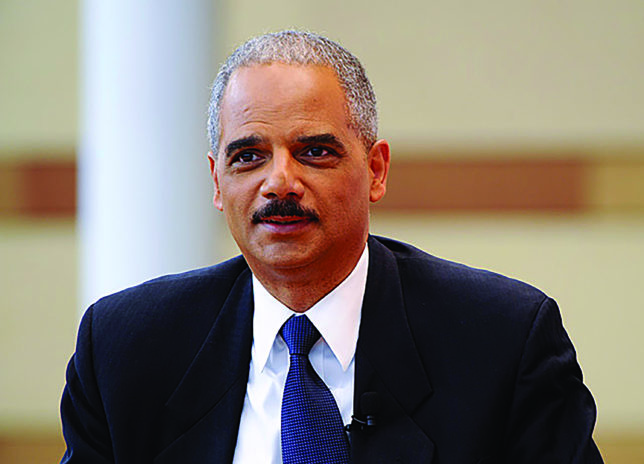 Holder is the ultimate Washington insider and political elite. His tenure as attorney general saw him held in contempt by a bipartisan Congress, while critics on the Right charged the self-described “activist attorney general” with politicizing the U.S. Justice Department by ignoring Democratic voter intimidation cases and hiring only committed leftists to the civil service.

He held a lucrative job at the mega-lobbying firm Covington & Burling from 2001 until he was sworn in as the U.S. attorney general in February 2009. After leaving office in 2015, he immediately returned as a partner in the firm, which literally kept an empty office waiting for him, according to one report. (Liberal Rolling Stone called him a “Wall Street Double Agent” for cashing in on the $2.5 million partnership immediately after leaving public service; he’s still listed as a partner at Covington & Burling.)

He’s also an out-and-out partisan. In July 2017, Holder declared that “Congress is broken” thanks to Republicans’ “extreme partisan gerrymandering.” “This creates a Congress driven by primary party politics and ideological extremism,” he added, “not one accountable to the will of the majority of voters.”

His solution: the National Democratic Redistricting Committee (NDRC), a political action committee (PAC) created after the 2016 election and chaired by Holder with the aim of replacing “gerrymandered” maps favoring Republicans with gerrymandered maps favoring Democrats. NDRC calls itself the “strategic hub for a comprehensive redistricting strategy” for Democrats, and it’s led by alumni from the Democratic Party’s biggest PACs.

The group has set its sights on 12 states where Republicans either have a legislative majority (Texas) or face a close race against Democrats (North Carolina) in 2020. His goal couldn’t be more partisan: permanently flip them Democratic blue.

NDRC has the support of former President Barack Obama. Obama’s presidential campaign–turned–activist group, Organizing for Action (formerly “Obama for America”), merged with the NDRC in 2019—gifting the NDRC the formidable list of donors, supporters, and volunteers built by the Obama campaigns over more than a decade. Now dubbed “All on the Line” under NDRC’s leadership, the combined groups have targeted 10 states with lawsuits meant to influence their redistricting to favor the Left in what Obama called an “opportunity to bend the great arc of history toward justice.”

When Holder launched the NDRC in a speech at the Center for American Progress, he outlined three goals:

If that sounds like the three-step plan to permanently flip Pennsylvania, that’s because it is. The NDRC’s organizational forms with the IRS state its partisan goal in black and white: “To build a comprehensive plan to favorably position Democrats for the redistricting process through 2022.”

Holder’s NDRC PAC is pouring money directly into Pennsylvania races. In the 2017–2018 election cycle, the NDRC sent $250,000 to Gov. Tom Wolf’s (D) successful reelection campaign and another $100,000 sent to the Pennsylvania Democratic Party’s Senate PAC. In the 2019–2020 cycle, it’s already given at least $25,000 to the Democrats’ Pennsylvania Senate PAC.

The National Redistricting Action Fund, Holder’s 501(c)(4) lobbying arm, manages the “All on the Line” campaign, focusing on turning out Democratic-leaning constituencies in the 2020 Census. In 2018 it also funded Democratic-aligned groups pouring cash into Pennsylvania races, gifting $2 million to PACRONYM—which ran nearly $1 million in independent expenditure campaigns against Republicans that year—and $100,000 to the PA Fund for Change, which spent $2.5 million helping Democrats running for the state legislature.

But the National Redistricting Foundation has already had perhaps the most potent impact on the 2020 election. The 501(c)(3) group describes its mission as “initiating litigation that will have a nationwide impact in creating more just and representative electoral districts,” which in effect means helping Democrats. To date, it has filed or supported several lawsuits. In Wisconsin, it demanded that then-Gov. Scott Walker (R) hold special elections in two state legislative districts. In Georgia, it accused Republicans of drawing racist congressional maps. And in North Carolina, it accused the state of drawing unfair congressional maps. Each of these is a heavily contested state for Democrats at the state or congressional level.

The National Redistricting Foundation has also litigated to huge effect against Pennsylvania’s congressional map, which was drawn by the state’s Republican majority in 2011. In 2017, the National Redistricting Foundation and the liberal League of Women Voters filed a lawsuit alleging that the map unconstitutionally favored Republicans. The state courts, including the Pennsylvania Supreme Court, threw the map out and redrew it in early 2018.

Liberals cheered; conservatives jeered. The New York Times wrote, “Democrats couldn’t have asked for much more from the new map. It’s arguably even better for them than the maps they proposed themselves.” One Republican consultant called it a “straight power grab by a partisan Supreme Court.”

A victorious Holder stated that the decision shows “how important it is that we elect more Democrats who will fight for fairness.” And he’s right—the new Pennsylvania maps, “fair” or not, arguably favor the Keystone State’s Democratic strongholds over Republican-held rural areas and will undoubtedly reshape the makeup of its 18 congressional representatives after the 2020 election.

Observers saw the fallout on Pennsylvania’s congressional delegation in the 2018 midterms, just months after the redistricting decision. In 2016, Republicans held a 12-6 majority of the state’s congressmen elected to the U.S. House of Representatives. Just two years later they finished with a 9-9 tie under the new maps.