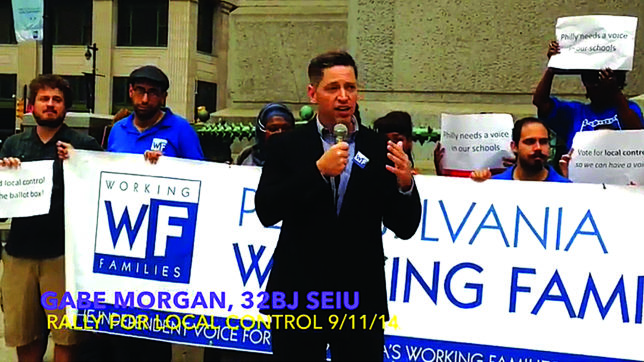 Who’s Behind One Pennsylvania?

Also prominent in the Left’s get-out-the-vote drive is One Pennsylvania (One PA), an activist group that’s virtually a subsidiary of the Service Employees International Union (SEIU), one of the largest institutional donors on the Left.

One PA was formed in 2011 by the SEIU but claims to have gone “fully independent” after it had “outgrown” the union. The facts say otherwise. For example, Erin Kramer, One PA’s current executive director according to the online listing, is a career SEIU organizer. The group’s latest IRS Form 990 filing from 2017 lists its president as Gabe Morgan, who is vice president of the powerful SEIU 32BJ local (covering Pennsylvania and the mid-Atlantic) and president of the SEIU Pennsylvania State Council, the union’s state political arm. (SEIU 32BJ is notoriously aggressive in its support for Democrats, and it has a history of corruption.)

Yet not one of One PA’s board members is listed anywhere on One PA’s website, even among its leadership.

One PA credits itself with knocking on some 238,000 doors and turning out nearly 7,000 voters to support left-wing candidates in the 2018 midterms. The group endorsed three Democrats for the Pennsylvania state legislature, all of whom were elected, and it endorsed another 11 candidates in the 2019 city council races in Pittsburgh and Philadelphia.

The Democracy Alliance Emerges from the Shadows

One PA has also earned the attention of the highly secretive Democracy Alliance, which apparently considers the group one of the most important in Pennsylvania. “If we don’t break escalating conservative control in key states like Ohio, Wisconsin, Pennsylvania and North Carolina,” the collective has stated, “the redistricting plans that are drawn up after the [2020] Census will cement right-wing power for decades to come.”

A recently unearthed 2016 internal report by the secretive group details 15 funding streams moving money to battleground states ahead of the 2016, 2018, and 2020 elections to avoid attention. With names such as the “Climate Action Fund” and “Latino Engagement Fund,” these streams run through a pair of nonprofits managed by Arabella Advisors, a for-profit consultancy in Washington, DC, and perhaps the biggest “dark money” funding network in America.

According to the report, in 2016 alone the Democracy Alliance’s 113 partners invested $146 million in “Progressive infrastructure map organizations” and promised another $71 million to 2020 efforts. (Those figures were promised prior to the 2016 election and Trump’s election; we expect actual 2020 sums to be even higher in the wake of the Left’s anti-Trump “Resistance.”)

The report also reveals that much of this spending was channeled through the New Venture Fund and Sixteen Thirty Fund—two nonprofits created and run by Arabella Advisors—and paid out by them as grants to allied state-level groups. Thanks to this document, we know which states the Democracy Alliance has targeted and who benefited.

The Climate Fund, for example, raised roughly $1.3 million in 2016 and gave One PA at least $188,000 in 2018 through the Arabella-run Sixteen Thirty Fund for “fighting a proposed refinery and dirty energy port facility in a low-income African-American community, educating voters on U.S. Senate candidate positions on climate change, and mobilizing them to vote.”

Similarly, the Democracy Alliance’s Youth Engagement Fund raised $3.5 million to bolster youth turnout, what the report calls the Left’s “long-term competitive advantage against the political Right.” Almost all of that was intended for youth turnout in elections—ideally “doubling” it in “high impact states.” On the report’s list of recipients are two branches of One PA: One Pittsburgh and the PA Student Power Network.

Finally, the Democracy Alliance’s State Engagement Initiative, is pretty brazen about its electoral goals in 2016, 2018, and 2020, including in Pennsylvania:

The dual goals of the State Engagement Initiative are both to change state policy through the electoral process and create pooled funds to leverage new state investments . . . . The states in which we are working in have either total conservative dominance at all levels of governance or mixed governance, so there is no state here where we can currently exercise progressive policy on the economy, health care or the social safety net.

The Cash Comes Pouring In

After Trump’s close and largely unexpected victory in Pennsylvania in 2016, it’s little wonder that Democratic-aligned PACs are spending millions of dollars in the state ahead of the 2020 election.

In July 2019, the Democratic super PAC Priorities USA—which spent $66 million helping to reelect Barack Obama in 2012 and spent another $117 million supporting Hillary Clinton in 2016, the most of any super PAC that year—announced the creation of Priorities Pennsylvania. Part of a $100 million four-state plan, the group plans on flooding Pennsylvania with tens of millions of dollars to support Democrats and bash Trump’s economy as “mostly helping wealthy people, not the middle-class.”

The Democratic attack group American Bridge 21st Century has already launched multiple television ads featuring self-identified Trump voters saying they’ve “soured on the president” and won’t support his reelection bid. (As it turns out, an Erie news outlet discovered that one of the supposed ex-Trump voters didn’t even vote in 2016.) The ads are part of American Bridge’s $10 million anti-Trump advertisement campaign launched in February 2020 covering Pennsylvania, Wisconsin, and Michigan—three states he narrowly flipped in 2016.

And the Tom Steyer–backed PAC For Our Future, which Politico describes as “the nation’s largest super PAC devoted to grassroots Democratic turnout,” is targeting Southeastern Pennsylvania, according to media reports.

There’s no doubt that the elites in Washington, DC, have their eyes set on rebuilding the “Blue Wall” of Democratic strongholds that Trump tore down in his historic 2016 campaign—and they may have the resources to do it.

Whomever Democrats nominate to represent their party in the 2020 presidential election, he’ll start the race in Pennsylvania with a powerful, highly coordinated network of activists and mega-funders at his back.