Plans to Flip Pennsylvania: Getting Out the Democratic Vote 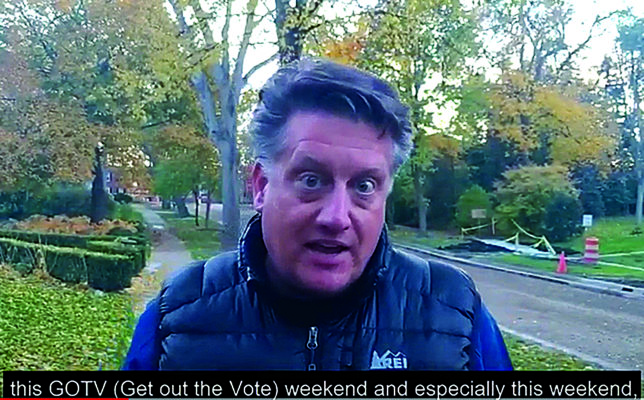 Greg Speed, the current head of America Votes, is a former staffer at the Democratic Congressional Campaign Committee, a group whose sole purpose is to elect Democrats to the House of Representatives. Credit: For Our Future Michigan. License: https://bit.ly/3cENYXs.
by Hayden Ludwig, Kevin Mooney

Getting Out the Vote—for Democrats

Supporting the census operation is the Left’s vast network of voter turnout groups. These organizations—which almost universally operate as tax-exempt nonprofits, mostly 501(c)(3) public charities—hide behind their IRS-required “nonpartisan” status, yet their efforts to turn out progressive voters put them squarely in league with the Democratic Party.

Chief among them is America Votes, which calls itself the “coordination hub of the Progressive community.” America Votes emerged from the Democrats’ defeat in the 2004 presidential election as the brainchild of a group of influential operatives. These operatives—Clinton official Harold Ickes, SEIU President Andy Stern, Sierra Club Executive Director Carl Pope, EMILY’s List founder Ellen Malcolm, and Partnership for America’s Families President Steve Rosenthal—quickly gained the support of major labor unions, litigation nonprofits, abortion groups, environmentalist groups, and professional activists to put together a huge $95 million war chest for churning out likely Democratic voters in key battleground states, including Pennsylvania.

Nonprofits like America Votes may register people to vote so long as they don’t direct them who to vote for. However, it can—and does—funnel millions of dollars to partisan PACs aligned with the Democrats. In 2017 (the most recent year on record), America Votes granted $160,000 to the Pennsylvania-based PAC Environment America Action Fund and $50,000 to the Harrisburg-based activist group One Pennsylvania.

If there’s any doubt that “nonpartisan” America Votes was always intended to aid Democrats with a wink and a nod, consider its founding leadership. The current head of America Votes, Greg Speed, is a former staffer at the Democratic Congressional Campaign Committee, a group whose sole purpose is to elect Democrats to the House of Representatives. Its founding president was Anne Bartley, a former aide to First Lady Hillary Clinton and a wealthy Democratic donor involved in founding numerous prominent leftist organizations, including the Democracy Alliance.

Pennsylvania is one of the first states in which America Votes began organizing, starting in 2003. America Votes considers Pennsylvania a “core state,” meaning the organization directly controls the get-out-the-vote operations in the state. Operations in less important “affiliate states” are generally outsourced to small, standalone affiliates.

Job postings on the website LinkedIn indicate that America Votes Pennsylvania is hiring data experts whose key responsibilities include “increasing engagement of state-based groups building power in communities of color in the planning process” and developing “campaign plans” for “maximizing shared voter file, targeting, and other data resources.” Another 2018 job listing for a field program manager lists responsibilities such as working with “dozens of Progressive partners across the state [Pennsylvania] as they plan and executive electoral and issue campaigns.”

These are more like job postings for a staffer on a political campaign, not a tax-exempt and nonpartisan nonprofit.

Similarly, in 2015, the field director for America Votes Pennsylvania gave a presentation to attendees of the Pennsylvania Progressive Summit, a political conference, on the “Progressive Roadmap to 2016”—lessons for the Left to win in the 2016 election. This seems to stretch the IRS definition of “charitable” beyond the breaking point.

Sure enough, America Votes acts in tandem with a coalition of some 50 left-wing groups to spur voter turnout for Democrats. The Pennsylvania branch of For Our Future, a $90 million PAC co-founded by billionaire and presidential also-ran Tom Steyer, is one such group. (Steyer’s eco-activist group, NextGen Climate, has donated tens of millions of dollars to For Our Future since its creation in 2016.)

For Our Future bragged in a 2018 press release that it “helped turn out the vote for [Gov. Tom] Wolf, [Sen. Bob] Casey, [Rep. Chrissy] Hohenstein, [State Sen. Lindsey] Williams and other key races across the state”—and that the redrawn congressional maps helped Democrats win big.

For Our Future PA added that the entire America Votes coalition in Pennsylvania “collectively knocked on 2.1 million doors during this election cycle and turned out a record number of midterm election voters across the state.” Don’t expect them to aim low in 2020, either; presidential elections typically see even higher voter turnout than midterms.

The Democracy Alliance credits America Votes with “engag[ing] and mobiliz[ing] voters in the successful PA-18 special election” for a congressional seat vacated by Republican Rep. Tim Murphy, after it was revealed that the supposedly anti-abortion Murphy had urged his mistress to have an abortion.

There are undoubtedly many reasons why Lamb won an upset victory, but in close races such as PA-18, America Votes’ concentrated, motivated get-out-the-vote operation can change election results. And the Democracy Alliance, the biggest collection of left-wing influencers and billionaires in America, credits them with doing just that.