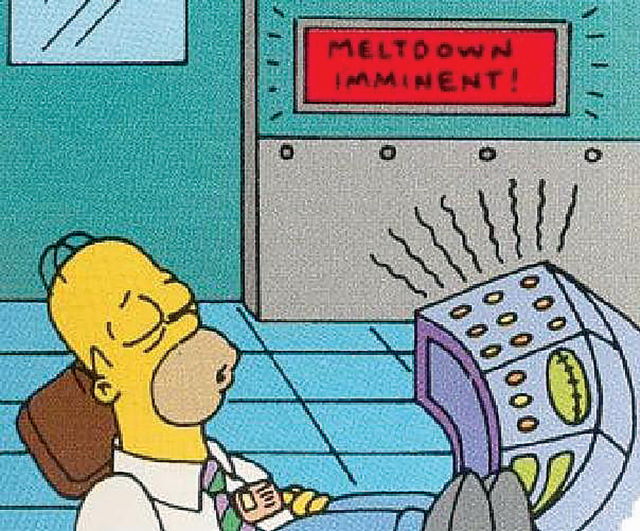 Summary: Most of the climate Left opposes carbon-free nuclear energy. The list includes big names such as the Natural Resources Defense Council, the Sierra Club, and the Environmental Defense Fund. The donors to the anti-nuclear Left are many of the nation’s Big Philanthropy giants, such as the Ford Foundation and the MacArthur Foundation. Collectively, the organizations that oppose the most dependable form of carbon-free power spend at least (and likely well more than) $1 billion per year.

Since 1989 in TV land, hapless nuclear power plant employee Homer Simpson has been the cause of countless comic atomic accidents. The original opening credits of The Simpsons show him recklessly racing home with a glowing uranium rod accidentally stuck to his shirt, which he discovers and indignantly tosses onto the street.

This admittedly hilarious portrayal of the technology is grossly and damagingly misleading. Nuclear power is a safe, reliable, and unmatched as a carbon-free source of electricity. The United States currently generates 20 percent of its electricity from nuclear fission, dwarfing idiosyncratic and spasmodic sources such as wind (8.4 percent of U.S. electricity production) and solar (2.3 percent).

James Hansen, a one-time NASA scientist that the lefty journalists at The Guardian refer to as “the father of global awareness of climate change,” believes in the carbon-cutting effect of nuclear power so strongly that in 2015 he advocated building 115 new reactors every year through 2050. Deploying thousands of them in just a few decades is a NASA-esque astronomical goal. As of July 2021, the World Nuclear Association counted just 443 civilian reactors in operation worldwide.

Similarly, a 2018 proposal from the Nature Conservancy (TNC) recommended building a path to lower carbon emissions by sharply increasing nuclear from a 7.8 percent share of world energy production to 33 percent.

Homer Simpson’s hilarious propaganda has almost certainly erected a tough cultural bias against these lofty ambitions. But ironically, to say nothing of hypocritically, far more damaging opposition lives among the largest names in the climate Left. Collectively, they have a combined annual advocacy budget exceeding $1 billion. Admittedly, they spend the $1 billion advocating for more issues than just a nuclear-free future, but the anti-nuclear issue is a major issue for many of them that interlocks with other priority issues. A lot of their loot has been coming from the nation’s richest philanthropic foundations.

The list of hypocrites includes the Natural Resources Defense Council (NRDC), the League of Conservation Voters (LCV), the Sierra Club, the Environmental Defense Fund (EDF), the Climate Reality Project (founded by Al Gore), and dozens more. This list even includes the League of Women Voters and the National Parks Conservation Association (NPCA).

The League of Women Voters (with a 2018 budget of $5.5 million) generally enjoys an undeserved reputation as a nonpolitical, neutral host of candidate forums and debates. This contrasts with its reliably center-left agenda on almost every controversial issue on which it has a position (e.g.: in favor of affirmative action and ObamaCare and opposed to education vouchers, the Keystone XL pipeline, and the Electoral College).

On nuclear energy the league doesn’t just lean left, it’s out on the left wingtip. In January 2019, it joined 625 other climate-Left organizations in co-signing a letter to Congress regarding the “Urgent Threat of Climate Change.”

The letter wasn’t so much opposed to carbon emissions as it was hostile to every form of dependable energy that we have. Pleading with Congress to enact “100% renewable energy” policies, the letter pointedly demanded that “any definition of renewable energy must also exclude” nuclear . . . and even “large scale hydro” [emphasis added]. The letter elsewhere maligned nuclear power as an example of “dirty energy.”

Large-scale hydroelectric dams provide carbon electricity from falling water. This coalition was so extreme that even power from the pull of gravity wasn’t pure enough.

Other lefty organizations with reasonably large reputations or budgets that also signed the letter included:

A movement with no known budget, the lawless Extinction Rebellion (XR) was a signatory. (For a look at XR and its vandalism, please see “Unabombers Without Bombs,” a cover story from Capital Research magazine in 2019).

In the next installment, the climate Left’s has a track record of opposing any energy source that works.