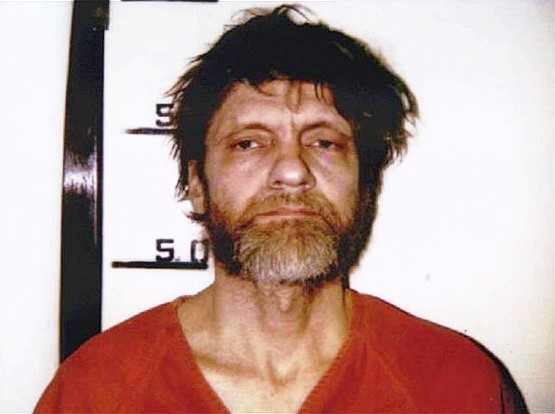 In Industrial Society and Its Future (the so-called “Unabomber Manifesto”), anarchist serial killer Ted Kaczynski argued industrial capitalism is destroying humanity and that only a return to a pre-industrial state of nature will save us. Credit: FBI. License: https://bit.ly/2Li4Nux.
by Ken Braun

In Industrial Society and Its Future (the so-called “Unabomber Manifesto”), anarchist serial killer Ted Kaczynski argued industrial capitalism is destroying humanity and that only a return to a pre-industrial state of nature will save us. If one accepts his “technology is inherently evil and enslaving” premise, then it isn’t a stretch to get sucked into his “ends justify the means” ethic of killing those who unwittingly feed the monster. However flawed, the Unabomber’s violent moral dilemma is so compelling that it is shared by the heroes of The Terminator film franchise that has raked in $1.8 billion.

Kaczynski is many unpleasant things, but insane isn’t one of them. Students at Alabama’s Huntingdon College found this out when he became their pen pal for a class project in 2010. After a series of back-and-forth letters, one undergrad grasped the frightening potential behind the man and his message: “If he were on the Internet, he would have millions of followers on Facebook.”

True enough. Had Kaczynski begun his attacks thirty years later, “Facebook Ted” may have put aside the violence of snail mail bombs and instead weaponized an army of social media followers to help him hobble the economy of a major city. This alternative is easy to imagine because it’s already happening in the form of a capitalism-hating, anarchist tribe born from the radical-left parentage of Occupy Wall Street and Earth First! Unlike the Unabomber, these activists preach non-violence, but their mostly identical desire to vandalize and ultimately obliterate the global economy is no less sincere.

By April of this year, Extinction Rebellion (“XR” for those adopting the trendy moniker) was already strong enough to deploy thousands of demonstrators onto the streets of London. In the process, they invaded a handful of major traffic thoroughfares, blocked them, and held them for eleven days. The uprising snarled traffic, required the deployment of 10,000 police officers, tallied up more than $45 million in lost economic and policing costs, and led to more than 1,100 arrests.

Early into the disturbance Extinction Rebellion announced its goal to “shut down London.” As its mobs began to demonstrate this lofty objective was attainable, the XR Twitter feed turned up the heat and called for reinforcements: “This movement is the best chance we have of bringing down capitalism. Get on board…” That last, perhaps too-revealing tweet was later deleted. But it wasn’t the only example of XR’s big picture planning for revolution against the free market. And they promised their April attack on the economy of London was just the beginning.

And speaking to Amnesty International, Extinction Rebellion co-founder Roger Hallam sounded every bit the radical and inflexible revolutionary: “We are going to force the governments to act. And if they don’t we will bring them down and create a democracy fit for purpose. And yes, some may die in the process.”

Extinction Rebellion seeks to ramp up its efforts in the U.S., though (so far) its trans-Atlantic efforts haven’t escalated to the level of the London disruptions. On July 12 the Chronicle of Philanthropy reported Rory Kennedy (daughter of the late Robert F. Kennedy) and Aileen Getty (granddaughter of billionaire oilman J. Paul Getty) had already raised more than $600,000 to assist XR in paying for its disruptive tactics and legal fees, with plans to raise much more from U.S. philanthropic foundations. Two weeks later, 17 members of XR were arrested for blocking and gluing themselves to the doorways of tunnels leading from legislative offices to the U.S. Capitol building.

In the next installment of Unabombers Without Bombs learn about Extinction Rebellion’s radical green demands.