Nuclear Power–Hating Left: Opposition to Whatever Is Working 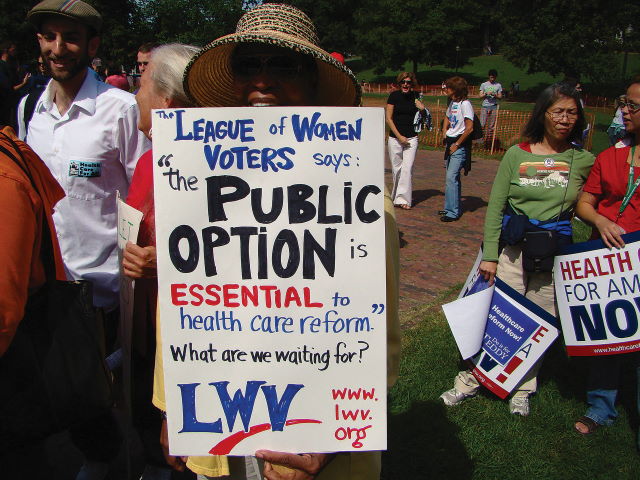 The League of Women Voters generally enjoys an undeserved reputation as a nonpolitical, neutral host of candidate forums and debates. On nuclear energy the league doesn’t just lean left, it’s out on the left wingtip. Credit: Zach A. License: https://bit.ly/3hJ2fq1.
by Ken Braun

Opposition to Whatever Is Working

Since 1976, the League of Women Voters has supported energy policies that “limit reliance on nuclear fission.” Yet for seven-plus decades fission reactions have been the only source of nuclear energy we have. So, this careful word selection seems to provide the pretense that the league might theoretically support nuclear energy . . . but only from something other than splitting atoms.

This dodge is typical of many left-leaning policy organizations: “We don’t oppose nuclear power in general . . . just any specific type that gets the job done!”

As with the League of Women Voters, this often results in the otherwise irrational organizations receiving undeserved credit for being reasonable.

For example, a September 2018 analysis from the Pew Charitable Trusts stated that “the Environmental Defense Fund and the Natural Resources Defense Council fear that energy from nuclear plants will be replaced by emissions-producing coal and natural gas plants.” In November 2018, U.S. News & World Report reported that both EDF and NRDC “cautiously see nuclear as a necessary part of decarbonizing the economy.”

But this is not how NRDC and EDF behave in practice.

Each organization recently celebrated former New York Gov. Andrew Cuomo’s decision to close both reactors at the Indian Point nuclear plant by April 2021—14 years ahead of schedule. Both organizations fed the public a credulous theory that wind and solar energy could make up the lost output.

Energy journalist Robert Bryce spoke for the sensible environmentalists who knew this math was bogus. Writing in April 2020 as the first of Indian Point’s two reactors was decommissioned, Bryce noted that the little pile of uranium had produced “about 8,000 gigawatt-hours of electricity a year from a site on the Hudson River that covers less than a half square mile.” Solar panels producing the same power, according to Bryce, would need to cover “140 times” that space (or about 70 square miles), and a wind farm with the power output of the lost reactor would need 250 square miles.

It should be obvious (though it is apparently not to many) that obtaining carbon-free electricity from a half-square-mile plot the size of an upscale suburban housing development is far preferable to chewing up a space equal to half the acreage of Grand Teton National Park with a wind farm.

That is the magic of power density. Coal, natural gas, and oil pack far more energy for their size than does wood. And nothing humans have in our toolbox beats the power density of a uranium fuel rod.

Conversely, the wind and the sun scatter their energy across the globe, dripping just tiny fractions of the density provided by our dependable energy sources. Compounding the density problem, solar and wind are also notoriously intermittent. No matter how sunny it is where you live, it is an inalterable fact of astronomy that your sunlight stops working every single day.

So, storage is essential for any form of reliable energy. If it cannot be stored, then it cannot be held until you need it most. High density energy stores itself, with no need for batteries. Think of a trainload of coal or a tank of gasoline, which sits there waiting to be used.

But there is no such thing as a battery that efficiently stores the wind and sunlight on a mass scale equal to our dependable natural batteries. If the super batteries to store wind and solar are ever economically available, they might suck up even more acreage to go alongside the vast fields of wind turbines and solar panels catching the trickles of power from the sky.

Michael Shellenberger, founder of Environmental Progress, is fond of pointing out that a lump of carbon-free nuclear fuel no bigger than a can of Coca-Cola can hold all the energy currently used over the entire lifetime of a typical American.

How’s that for advanced battery technology?

It was a lie to assert that Indian Point’s carbon-free power could be replaced with less intrusive energy sources. And the celebration by EDF and NRDC over the Indian Point closure was not an aberration.

Similarly, over the past five years NRDC staffers have argued the case for closing nuclear facilities in California, New Jersey, Ohio, and Pennsylvania.

In each instance the two organizations criticized the cost of the nuclear facilities and sometimes accused their owners of seeking a “bailout” to keep the nuclear plants running.

Nuclear energy does cost more than the other dependable fuels (e.g., coal and natural gas) that could theoretically provide most (or even all) of our electricity. The United States is the largest natural gas producer on the planet and also has the largest proven coal reserves (enough to last us three centuries at current consumption rates).

Dramatically ramping up use of nuclear power to cut carbon emissions is an optional luxury. It is not a necessity. There is a principled economic case to be made for letting the market decide the best mix of energy options.

But EDF, NRDC, and their radical anti-nuclear allies can’t argue those principles with any sincerity. The cost and subsidy criticism rings hollow from those that have supported staggering taxpayer giveaways for wind and solar. Robert Bryce reports, “In 2018, on an energy-equivalent basis, the solar sector got 253 times as much in federal tax incentives as nuclear energy. The wind industry got 158 times as much as nuclear.”

Shutting down nuclear plants will always require a switch to either high-density, carbon-emitting fuel sources or unreliable, low-density, space-swallowing wind and solar. If NRDC and EDF were really trying to substantially cut carbon emissions and reduce the impact on the land and nature (i.e., “the environment”), then they would promote nuclear energy subsidies that are hundreds of times greater than those of wind and solar, not the other way around.

The behavior of these two organizations shows them opposed to what works best for producing zero-carbon energy. Their agenda is instead what works for the wind and solar industry. Environmental Progress refers to EDF and NRDC as two of the “most influential anti-nuclear organizations in the United States.”

It’s a charge that sticks.

In the next installment, the anti-nuclear camp has many residents.