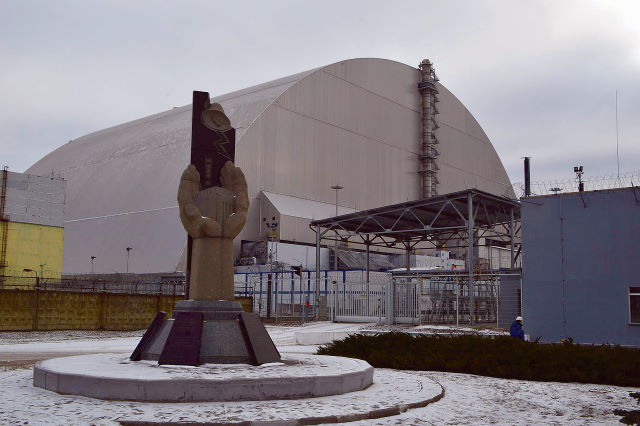 The 1986 explosion of the reactor containment building at the Chernobyl nuclear station in the Ukraine (then a part of the Soviet Union) was by a wide margin the worst nuclear accident in history. Pictured here is the New Safe Confinement structure built in 2017 to encase the reactor ruins and temporary shelter built in 1986 to prevent further radioactive contamination. Credit: Ian Bancroft. License: https://bit.ly/3zhqQs1.
by Ken Braun

How Safe Is Nuclear Power Really?

Probably close to 1,000 organizations in the United States display a recognizable hatred of nuclear energy. No matter what one’s nuclear phobia, there’s an advocacy group out there to represent it. For example, there is a niche anxiety closet named the Global Network Against Weapons & Nuclear Power in Space, which reported $0 in spending for 2016, 2018 and 2019, but more than $30,000 during most of the other years since 2011.

With all that worrying going on, is there a lot to worry about?

The 1986 explosion of the reactor containment building at the Chernobyl nuclear station in the Ukraine (then a part of the Soviet Union) was by a wide margin the worst nuclear accident in history. The World Nuclear Association explained the disaster as “the product of a flawed Soviet reactor design coupled with serious mistakes made by the plant operators” and “a direct consequence of Cold War isolation and the resulting lack of any safety culture.”

A less diplomatic interpretation is that the Soviet bureaucracy hired a team of Homer Simpsons to design and build a dangerously flawed nuclear reactor. Then they located another team of Homers to operate it. As if it were an episode of the TV show, but without the laughs, this crew managed to accidentally blow up the building, light the reactor core on fire, and get it to spew radiation across international borders. The Soviet bureaucracy compounded the deadly fiasco by initially trying to keep neighboring nations and the world from finding out about it.

How Deadly Was Chernobyl?

During 2020 in the United States alone, 29 coal miners were killed. A U.S. Department of Labor news release celebrated this as “the sixth consecutive year that mining fatalities were below 30.”
This means the safety-conscious and stringently regulated U.S. coal industry is still almost as lethal every year as the dangerously incompetent Soviet nuclear program was at its worst more than three decades ago.

More than two decades after Chernobyl the U.N. Scientific Committee on the Effects of Atomic Radiation (UNSCEAR) issued a report analyzing the fatality and health effects of the disaster. It noted that of the 134 nuclear workers and first responders directly exposed to the worst radiation, 28 died during or in the weeks after the incident. Over the following 18 years, there were 19 additional disease-related fatalities that could be credited to the accident but “not necessarily associated with radiation exposure.” So, less than 50 direct fatalities from the accident.

Additionally, the investigators credited most of an estimated 6,000 additional thyroid cancer cases over the ensuing two decades to persons who were children during the incident and living nearby. These were thyroid cases over 20 years, not fatalities, and the five-year survival rate for thyroid cancer is 98 percent.

Apart from those deaths and statistically estimated fatalities, the UNSCEAR report stated there was “no clearly demonstrated increase in the incidence of solid cancers or leukemia due to radiation in the exposed populations” and “the vast majority of the population need not live in fear of serious health consequences due to the radiation from the Chernobyl accident.”

Precisely one radiation-related death is attributed to the 2011 Fukushima disaster in Japan, the next worst nuclear accident in history. In that case a radiation-exposed plant worker was diagnosed with a lung cancer four years after the incident.

In 2020, the worldwide relative deaths for each source of energy was calculated by the Oxford Martin Programme on Global Development at the University of Oxford. The researchers crunched the numbers on all realistically imaginable causes of death from energy production and use over many decades, such as Chernobyl, coal and uranium mine accidents, oil rig fatalities, estimated deaths from air pollutants (a lot of those), and all else.

On the nuclear side, they used a much higher estimated radiation death toll from Chernobyl than UNSCEAR. They also included 573 people assumed to have “died as a result of evacuation procedures and stress-induced factors” after Fukushima, a nuclear accident triggered by a devastating earthquake and tsunami. The authors drily note that “the evacuation of populations affected by the earthquake and tsunami at the time can make sole attribution to the nuclear disaster challenging.”

Their conclusion was that nuclear energy fatalities equaled 0.07 people per terawatt-hour (TWh) of energy generated, functionally equivalent in safety to wind power (0.04 deaths per TWh), solar power (0.02), and hydroelectric dams (also 0.02). Both due to inherent safety concerns and air pollution emissions, all rival forms of energy generation were found to be tens to hundreds of times more lethal: brown coal (32.72 deaths per TWh), coal (24.62), oil (18.42), and natural gas (2.82).

Even at this, the Oxford Martin analysts concede their tally of fatalities from nuclear power may be much too high because of the possibility that many researchers are overestimating the risk of low-level radiation exposure from Chernobyl. They concluded, “Contrary to popular belief, nuclear power has saved lives by displacing fossil fuels.”

In the next installment, learn about the bloody legacy of wind and solar power production.