Nuclear Power–Hating Left: Nuclear Energy Is for the Birds 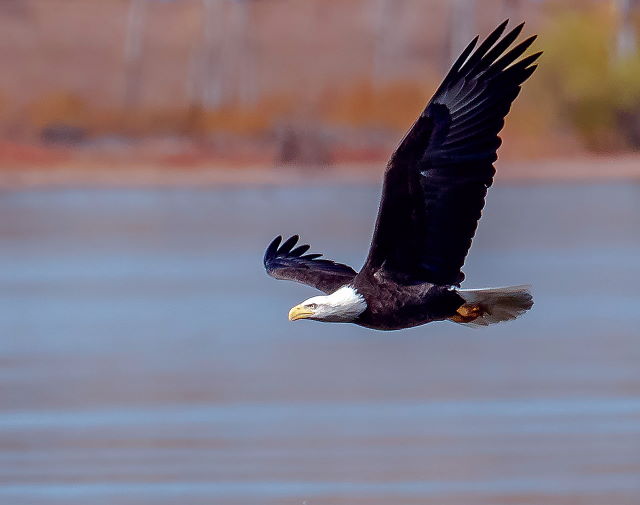 Today, bald eagles are a relatively common sight if you watch the skies near a reasonably large river or other body of water. With a wingspan of seven feet or more and striking white head and tail, like America itself, our national symbol is both unmistakable and difficult to look away from. Credit: Tom Wilberding. License: https://bit.ly/3hL9aPw.
by Ken Braun

Nuclear Energy Is for the Birds

Protecting human lives is obviously important, but those are not the only lives humans care about.

Today, bald eagles are a relatively common sight if you watch the skies near a reasonably large river or other body of water. But this takes nothing away from the majesty of seeing them. With a wingspan of seven feet or more and striking white head and tail, like America itself, our national symbol is both unmistakable and difficult to look away from.

Yet within the living memory of many Americans this glorious show was almost impossible to see and nearly ended forever. In the 1950s the lower 48 states were down to just 412 nesting pairs of bald eagles, a number that had recovered to only 1,482 pairs as late as 1982. Saving these glorious predators was arguably the most iconic accomplishment of the American environmental movement.

But not all supposed protectors of the land and its coolest creatures hold this accomplishment in such high esteem. As Obama administration staffers were packing to leave at the end of 2016, the Associated Press reports some last-minute permission slips were signed for raptor-killers:

The Obama administration on Wednesday finalized a rule that lets wind-energy companies operate high-speed turbines for up to 30 years—even if means killing or injuring thousands of federally protected bald and golden eagles. Under the new rule, wind companies and other power providers will not face a penalty if they kill or injure up to 4,200 bald eagles, nearly four times the current limit.

To appreciate the magnitude of this policy absurdity, imagine the outrage if you simply remove the word “wind” from the previous quote. Few other (perhaps no other) “companies”—energy or otherwise—would dare ask for permission to slaughter thousands more bald eagles each year than we even knew existed just a few decades ago.

Yet Big Wind got away with it. In 2020, Robert Bryce wrote, “The wind industry considers bird kills to be a trade secret and it has even sued to prevent government agencies from releasing data on bird kills.” His estimate was that more than 600,000 migratory birds are killed by wind turbines each year.

Once again, consider a hilarious hypothetical counterfactual: “Big Oil: It’s none of your business how many eagles we’ve killed!”

As Bryce noted, bald eagles are just the most iconic carnage. Migratory birds are also at risk. And name your favorite big raptor or even bats and you might find some of its kin (or pieces of same) lying dead under a local wind turbine—that is, if you’re allowed to go look at the “trade secrets.”

A California solar farm may be killing as many as 28,000 birds a year, The Associated Press reported earlier this week, roasting the birds midflight as they flap through the sun’s magnified rays, turning them into smoking “streamers” as they plummet to the ground.

Although the solar and wind industries claim to be making progress in limiting this damage, morbidly obese taxpayer subsidies and other government goodies aimed at ramping up the wind and solar farms will obviously increase the kills and (per the poor power density problem) needlessly reduce the habitat.

It’s comical to see what some supposed conservationists will go through to avoid even mentioning nuclear energy as alternative to killing our biggest and most beautiful birds. The Sierra Club produced a “Fact Sheet” on “Wind Energy & Birds.” Their big point: “It’s not a choice between wind and nothing, it’s a choice between wind and fossil fuels.”

Some choice. It’s missing something important. According to the Department of Energy, in 2020 nuclear power plants in the United States produced almost two times the electricity of wind and solar combined: 20 percent versus 10.7 percent.

The Sierra Club fact sheet also identifies the World Wildlife Fund (WWF) as one of the “conservation groups” that “understand the need for more wind energy.” WWF (with a 2018 U.S. budget of $258 million) registered its own firm opposition to nuclear energy as recently as April 2021.

Another dubious Sierra Club “fact” was a chart demonstrating that house cats kill more birds than wind turbines. It’s true as far as it goes, but eagles are slow breeding apex predators not generally at risk from any other predator (except humans). They’ve even been known to grab and take away house cats and small dogs.

So anyone living with a huge, uncaged cat that is theoretically vicious enough to be out killing eagles would not be alive long enough to report it.

Cutting Out the Carbon Hypocrites
A conservation group isn’t worthy of the claim if it implies that a Siamese kitty killing hundreds of homely house sparrows is morally equivalent to a wind turbine that slices up even one difficult-to-replace bird of prey.

Yes, that’s a value judgment biased strongly in favor of protecting the wildlife humans prefer, rather than saving whatever “nature” has “created” for us. We own the planet; nature does not. We make the rules—the laws. If the laws are not meant to save the world for the things we wish to enjoy and need for our prosperity, then what—or whom—are we making them for?

Of course, we can and often do disagree furiously over what laws we wish to create, based on conflicting values and concerns. Few political and policy arenas are more acrimonious than the carbon and climate debates.

To one side are climate scientists and activists, such as the previously referenced James Hansen, who counsel that humanity is on a collision course with terrifying environmental and economic consequences. They advise that drastic policy action is needed to reduce carbon dioxide in the atmosphere.

On a different side are those such as theoretical physicist Steven E. Koonin, a former undersecretary for science in the Department of Energy during the Obama administration. In a 2018 Wall Street Journal essay, using his own close reading of the Intergovernmental Panel on Climate Change’s 2014 report, he wrote that it showed human-induced temperature changes were not a “significant” threat to the American or world economies and that the “overall economic impact of human-caused climate change is expected to be quite small.”

The carbon emitted by our current energy choices has been a small concern for policymakers partial to Koonin’s perspective. Conversely, those listening to Hansen have placed carbon-free preferences and carbon-reduction mandates at the center of the laws they propose.

These have been irreconcilable differences for too many years to count. This does not need to continue.

The carbon-fearing have precious little to show for the lopsided subsidies gifted to the wind and solar industries. Conversely, the carbon indifferent have been unable to kill those giveaways. Simply moving the money to nuclear power would accomplish the carbon reduction desired by one perspective and produce the reliable power insisted upon by the other.

This could—perhaps should—be considered an affordable compromise for free market purists opposed to all energy subsidies. After all, we have already been spending the money to create tiny trickles of power while killing some extra birds. Why not save the birds and radically ramp up the electricity output?

The only factions that can’t afford this agreement are the grossly overfunded, extremist, and hypocritical left-wing environmental movement and its benefactors in Big Philanthropy. A radical ramp up of reliable carbon-free power would largely end the disputes that keep them employed. Perhaps that explains why so many of them are standing in the way.

This article appeared in the October 2021 issue of Capital Research.