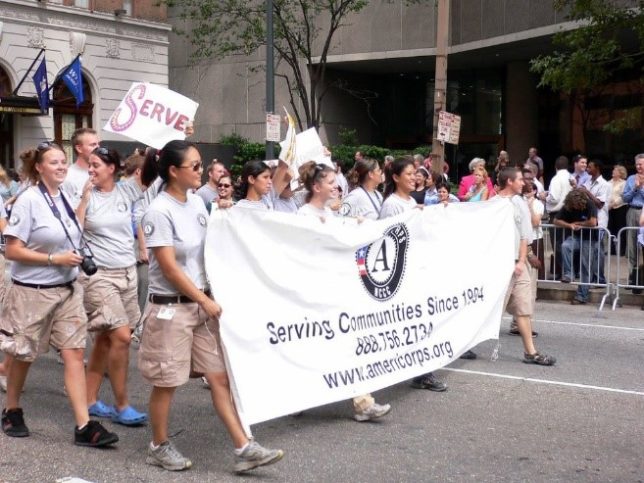 The CNCS is an independent federal agency that runs the AmeriCorps and Senior Corps national service programs, which together account for approximately 70 percent of the CNCS’s $1.1 billion budget. Credit: Maitri. License: https://bit.ly/2WwtslV.
by Robert Stilson

Respect for the Taxpayers’ Investment

Ensuring respect for the taxpayers’ investment reflects the understanding that federal funding to nonprofits represents a compulsory investment in that nonprofit by the taxpayers, with the “returns” primarily being program successes. Practically speaking, this means that grant programs must be effective and grantees must operate in a responsible manner. These are intuitive tenants of good government, yet the Capital Research Center has cataloged a variety of programs and grantees that appear not to meet this standard.

Some programs simply don’t seem to work that well. The U.S. Department of Labor’s Senior Community Service Employment Program spends $400 million a year to provide subsidized part-time work and job training to low-income older Americans. The program is implemented by state government agencies and 19 nonprofits, some of which are almost entirely funded by the program. The goal is to eventually transition participating seniors to unsubsidized employment.

Unfortunately, the program does not appear to be especially effective at accomplishing this. According to government data, the cost per participant is over $7,000, and nearly half of participants don’t even complete the program. Those who do still don’t fare particularly well: The employment rate four quarters after program exit in 2018 was less than one-third. The Department of Labor, under the Trump administration, has proposed eliminating the program for fiscal year (FY) 2021.

In other cases the government doesn’t seem to know whether a program works or not. The Department of Labor’s Susan Harwood Training Grant Program allocates about $11.5 million each year to nonprofits to conduct workplace safety training for certain higher-risk workers. One obvious issue is that most employers are already legally required to provide appropriate safety training to their employees, which raises the question of why government should be involved at all. More pointed, though, is that program performance is measured only “in terms of the number of individuals trained,” and the government “has no evidence that the program is effective.” The Harwood program was also put up for elimination in 2021.

Sometimes problems are more systemic, in extreme cases extending to an entire federal agency. The Corporation for National and Community Service (CNCS) is perhaps the current paradigm example. The CNCS is an independent federal agency that runs the AmeriCorps and Senior Corps national service programs, which together account for approximately 70 percent of the CNCS’s $1.1 billion budget. In 2019 the CNCS made $560 million in grants and education awards through the largest of its three different AmeriCorps programs, which principally fund service opportunities for young adults at state and local government offices and at nonprofits.

Remarkably, for three straight years the CNCS has produced “unauditable” financial statements, meaning they “likely contain widespread material errors and should not be relied upon.” An audit from 2018 revealed that the CNCS expected to report improper payment rates in excess of the federal limit for all of its programs in 2019, with rates at that time exceeding 15 percent in four of them (including AmeriCorps). Grantee oversight has also been flagged as particularly insufficient. It’s a regrettable state of affairs for programs designed to foster important community service work, and the Trump administration has proposed eliminating the CNCS in 2021.

Numerous nonprofits rely so heavily on federal grant money for their revenue that they would immediately cease to exist without that funding. One example is Experience Works, a Virginia-based 501(c)(3) that relied solely on the Senior Community Service Employment Program for 94 percent of its total revenue in 2018. Another is Southwest Key Programs, which derived about 88 percent of its $434 million revenue in 2018 from the Unaccompanied Alien Children Program. It is among the largest nonprofit grantees of this Department of Health and Human Services program, which provides care for minors without legal immigration status and who are not accompanied by a parent or guardian.

Such extremely high levels of public funding raise important questions about outsourcing government functions to private operators, but they can also be hazardous to the recipient’s fiscal health. Overreliance on federal grant money can cause a nonprofit to collapse if it cannot secure sufficient private funding to keep up with the overhead costs of implementing government-funded programs.

This was apparently a primary issue in the case of the Youth Policy Institute, which suddenly imploded in late 2019 under intense scrutiny from the U.S. Department of Education, its largest federal benefactor. The Youth Policy Institute was a $40 million Los Angeles nonprofit that relied on federal money for 67 percent to 84 percent of its annual revenue from 2016 to 2018. Its abrupt shuttering created uncertainties for the vulnerable children its programs were serving, put many former employees out of work, and jeopardized the cumulative impacts of tens of millions worth of taxpayer money that had accrued over its years in operation.

Finally, as with all institutions, government-funded nonprofits are not immune to executive impropriety. The Youth Policy Institute, for example, accused its former president, Dixon Slingerland, of misusing up to $1.7 million for his own personal expenses, as well as directing that federal grant money be disbursed for programs that had not actually incurred any costs. Slingerland has called many of these allegations “incorrect and extremely misleading.” In another case from 2019, the former president and CEO of Southwest Key Programs, Juan Sanchez, resigned amid a federal investigation into his financial dealings, which a former IRS official described as “profiteering.” Sanchez received over $3.5 million in compensation from Southwest Key—an almost entirely taxpayer-funded nonprofit—in 2018.

A common thread ties these examples together: The federal government determined that taxpayers should invest in programs operated by private charities, yet those investments yielded, at best, questionable returns. Proper respect for the taxpayers’ investment demands better—a proposition that taxpayers of all political leanings can unite behind.

In the next installment of “Conservative Principles for Government-Funded Nonprofits,” consider the potential impact of respect for the taxpayers’ beliefs.