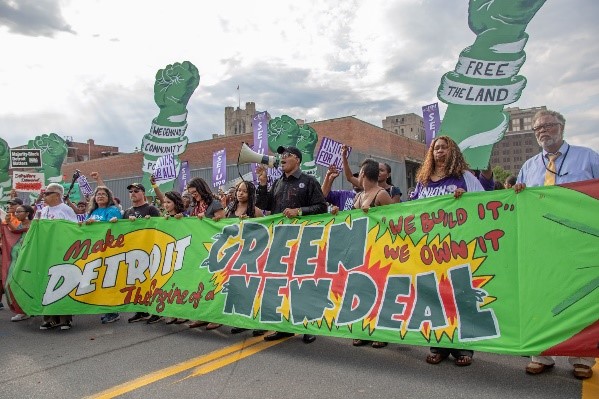 Near the top of every conservative’s list of 2019’s most preposterous legislative proposals would be the Green New Deal. Credit: Becker1999. License: https://bit.ly/3fNHcA2.
by Robert Stilson

Respect for the Taxpayers’ Beliefs

The second conservative pillar of federally funded nonprofit stewardship is respect for the taxpayers’ beliefs. Specifically, conservatives might justifiably object to seeing their tax dollars flow to private groups that stake out partisan positions on divisive issues. At bottom, this is a form of compelled financial support for groups that espouse views the taxpayer may strongly oppose. This principle is considerably more difficult to translate from theory into action, due to several practical and legal considerations.

Since Americans’ ideological leanings are varied and polarized, nonprofits that receive government funding would ideally operate strictly as truly nonpartisan charities. Advocacy on divisive political issues should be the exclusive domain of privately supported nonprofits, whose donors freely contribute in accordance with their own beliefs. Supreme Court precedent, though, places notable limits on how the government may condition federal funding on the basis of protected First Amendment activity. Accordingly, a grant condition that forbade certain forms of advocacy on behalf of the recipient would, absent particular circumstances, likely be struck down.

Notwithstanding these limitations, cataloging examples of partisan-leaning nonprofits that receive public money still serves several important purposes. It educates the taxpayers about the sorts of groups they are supporting—always a worthwhile endeavor on a topic that remains rather opaque to the general public. The attention might prompt some nonprofit grant recipients to redirect their activities into more ideologically neutral lanes, recognizing themselves as stewards of public money sourced from taxpayers of all political leanings. Subject to constitutional restrictions, such information might also be probative in agency decisions when selecting which prospective grant recipients are the best candidates to carry out particular program objectives. Finally, lawmakers could weigh the information when considering whether to reauthorize a particular program.

Near the top of every conservative’s list of 2019’s most preposterous legislative proposals would be the Green New Deal. This sweeping bid to remake the economic and environmental framework of the United States in catastrophic ways was estimated to cost as much as $90 trillion and died a 0-57 death in the Senate not long after being introduced.

Prior to the introduction of the actual legislation, however, a coalition of nearly 650 organizations signed an open letter to the U.S. House of Representatives detailing a series of requirements that those groups felt “at a minimum” needed to be included in any Green New Deal bill. These minimum demands included a shift to total renewable power generation by 2035 and complete de-carbonization of the U.S. transportation system by 2040, both of which would eliminate 90 percent or more of the country’s existing energy sources. The letter also called for a ban on fossil fuel exports and for holding energy companies liable for damages caused by climate change.

Conservatives might be tempted to laugh off such proposals, totally unaware that their tax dollars have been supporting over 40 of the letter’s signatories. According to data from USASpending.gov, in some cases the support was in the millions of dollars. The Institute for Governance & Sustainable Development has received over $6.4 million from the government since FY2008. Another nonprofit signatory, GRID Alternatives, has taken in about $3.5 million just since FY2015. The Earth Island Institute, recipient of over $900,000 in federal awards since FY2008, accounted for at least five different fiscally sponsored projects among the letter’s signatories. That’s a lot of taxpayer support for private groups that favor economic policies often described as socialist.

Labor unions and their affiliates are the prime examples. The Service Employees International Union, the United Automobile Workers, the United Food and Commercial Workers, the American Federation of Teachers, the United Steelworkers, and the Laborers’ International Union of North America have all received over $1 million under the Harwood program since FY2008, either directly or through an affiliated 501(c)(3). All six of these unions are among the top Democratic contributors since the 1990 election cycle.

The largest recipient of Education and Outreach program funding is a 501(c)(3) called the National Fair Housing Alliance. According to USASpending.gov, it has taken in nearly $2 million in program grants since FY2017. Despite this generous funding, the National Fair Housing Alliance has been markedly antagonistic to several Trump administration priorities, even going so far as to form a coalition with six other left-leaning groups to declare that “The Trump Administration is attacking civil rights protections . . . [a]nd this is just the beginning if we don’t stop this.”

Other left-leaning Education and Outreach grant recipients include New Jersey Citizen Action, whose mission is to “combine on the ground organizing, legislative advocacy, and electoral campaigns to win progressive policy and political victories,” and the Mississippi Center for Justice, which recently described federal immigration enforcement as “morally reprehensible.” A grant of $125,000 was even provided to Asian Americans for Equality in 2019, a left-leaning activist group that in its early days was reportedly associated with the Communist Workers’ Party, a radical Maoist political movement.

Legal Services Corporation. One conduit through which large sums of public money flow to several nonprofits that display ideological bias is the Legal Services Corporation (LSC). A 501(c)(3) nonprofit created by Congress in 1974, the LSC provides civil legal aid to clients at or below 125 percent of the federal poverty level. Despite its independent status, the LSC is essentially a vehicle for federal grantmaking and is almost entirely funded by the government. Its FY2020 congressional appropriation was $440 million. Most of this money is in turn distributed to a network of over 130 local legal aid nonprofits, which rely to varying degrees on this support.

Civil legal aid is a genuinely unmet need for many of the poorest Americans, but conservatives have questioned whether the federal government should fund it. The Trump administration proposed completely eliminating the LSC in its FY2020 budget. Another objection has centered on the persistent tendency of some LSC grantees to litigate and advocate on issues of political importance or to otherwise evidence ideological biases in their activities. This activist-attorney approach to legal aid was championed by none other than Hillary Clinton, who chaired the LSC’s board of directors for a portion of her four-year term in the late 1970s and early 1980s.

For some LSC grantees, this legacy continues unabated. Legal Services NYC, which has averaged over $12 million in annual LSC funding in recent years, intervened against a 2019 challenge to New York’s extensive (and much-maligned) rent control laws and publishes an immigration guide that advises immigrants not to “carry any documents about your country of origin.” It has also recently provided substantial funding to left-wing activist groups such as Make the Road New York and New York Communities for Change, which declares its mission to “fight against capitalism and centuries of oppression.” Indiana Legal Services, which was 74 percent funded by the LSC in 2018, sued to overturn that state’s Medicaid work requirements framework at the federal level in 2019.

The Legal Aid Foundation of Los Angeles, recipient of over $32 million in LSC grants from 2014 to 2018, has filed a series of lawsuits against local governments that many contend have made it much more difficult to address the problems arising from Los Angeles’s homelessness crisis. California Rural Legal Assistance, which receives about 60 percent of its funding from the LSC, has in recent years given over $100,000 to a “reproductive justice” nonprofit that co-sponsored legislation requiring that all public universities in California provide medication abortion as part of on-campus health services. Such activities, while not violating any legal requirements, are likely not what taxpayers conceptualize as legal aid.

This sampling of left-leaning nonprofits that receive substantial federal grant money highlights the central issue raised by the concept of respecting the taxpayers’ beliefs: Conservative taxpayers are being compelled to support private charities that openly advocate for views that likely run counter to their own. If the government programs that make use of these levies are indeed worth continued funding (because, for instance, they are demonstrably effective at their intended purpose), true ideological neutrality on the part of the grantee charities would demonstrate the proper respect for taxpayers’ beliefs warranted by their forced contribution.

In the next installment of “Conservative Principles for Government-Funded Nonprofits,” examine the peculiar issue of grantee-plaintiffs.