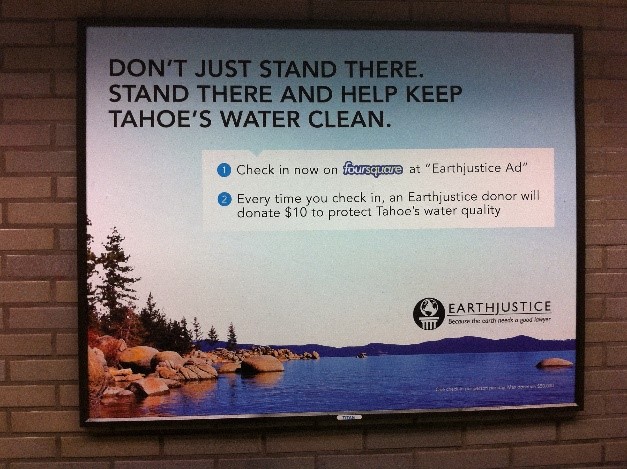 Earthjustice, which represents many grantee-plaintiffs free of charge despite not being a federal grant recipient itself, touts its success in battling “the Trump administration’s worst environmental attacks.” Credit: Jason Tester Guerrilla Futures. License: https://bit.ly/3dKa8XR.
by Robert Stilson

The Peculiar Issue of Grantee-Plaintiffs

At least one phenomenon blends issues related to both the taxpayers’ investment and the taxpayers’ beliefs: federal grantees that file lawsuits against the federal government, sometimes against the very same agency that provided the funding. Such groups may be termed “grantee-plaintiffs,” and their implications for taxpayers are troubling.

In the first place, lawsuits cost money—often a great deal of money—which must come from somewhere. Some grantee-plaintiffs pay their own legal costs while others might enlist the services of pro-bono litigation nonprofits such as Earthjustice. Still, even groups that receive no-cost representation must direct staff time and other resources toward preparing their case. Federal grant money that flows to grantee-plaintiffs for unrelated purposes can free up funding for litigation—a monetary concept known as fungibility. Because the government is obligated to pay its own legal costs, this can place the taxpayer in the unfortunate position of subsidizing both parties to a case.

Some grantee-plaintiffs sue the government with remarkable frequency. The Natural Resources Defense Council, recipient of about $4.3 million in federal money since FY2008, managed to record its 100th lawsuit against the Trump administration by the end of 2019. The Environmental Defense Fund has collected about $3.8 million since FY2008, yet was involved in nine different climate change lawsuits filed against four different federal departments in 2018 alone.

Six of the ten nonprofits that sued the government over Grand Staircase-Escalante National Monument have been federal grantees or contractors in recent years, for a total in excess of $6.2 million. So were five of the seven plaintiffs in the 2019 lawsuit over revisions to the Endangered Species Act, to the tune of about $9.6 million. The National Fair Housing Alliance and Texas RioGrande Legal Aid have each filed a prominent lawsuit against HUD within the last two years, and both are also recent HUD grantees.

Perhaps more galling to the conservative taxpayer than the money involved are the politics. These grantee-plaintiffs are not suing federal agencies because one of their staffers slipped and fell while on government property. In fact, the ideological underpinnings of lawsuits are openly professed in many cases. The Natural Resources Defense Council, for example, maintains a “Taking the Trump Administration to Court” database of its prolific litigation record against the administration. Earthjustice, which represents many grantee-plaintiffs free of charge despite not being a federal grant recipient itself, touts its success in battling “the Trump administration’s worst environmental attacks.” Of course, grantee-plaintiffs that don’t explicitly tie their litigation to a political agenda may still display overt partisan biases in other activities.

The implications for conservative taxpayers are clear: Federal funding that flows, or has flowed, to grantee-plaintiffs suggests public support for private agendas that a conservative may strongly oppose. It is a strange situation indeed when Americans elect a government, which then taxes them and distributes a portion of the proceeds to private nonprofits, which then sue the government over policies it enacted as part of implementing the very platform that got it elected in the first place.

In some cases it is that simple. In others, nonprofit grantee-plaintiffs might exist primarily (or exclusively) as grantees under a Democratic administration and as plaintiffs under a Republican one, or vice versa. Neither the Natural Resources Defense Council nor the Environmental Defense Fund, for example, have received any federal grant money since FY2016, according to USASpending.gov. In an era when political power bounces back and forth between two increasingly polarized parties, today’s grantees may become tomorrow’s plaintiffs. In all cases, taxpayers of every partisan shade foot the bill fiscally and ideologically.

Most Americans, left or right, would undoubtedly agree that respect for the taxpayers’ investment and beliefs are sound principles to apply to federal spending. But these concepts touch on issues of particular importance to conservatives. Astonishing annual deficits and the many trillions of dollars in concomitant national debt rightly vex the millions who despair at how such profligate government spending will affect future generations.

Fundamentally, enlisting private tax-exempt charities to carry out programs conceived, directed, and funded by the public sector raises serious questions: Many would argue that free-market principles provide no more justification for government intervention in the nonprofit sphere than they do in the for-profit one. Of course, how can a nonprofit that derives virtually all its income from the federal government really be called a “charity”?

Important as these issues are, real world impacts are achieved in more incremental ways. Conservatives should strive to ensure federal funding to private nonprofits is conducted as far as possible in a manner that respects the taxpayer at all grant levels: agency, programmatic, and recipient. Exposing examples where this is not the case may prompt positive changes that might gradually lead to a more efficient, accountable, and ideologically benign federal grantmaking operation. That is a worthy and attainable conservative endgame.