Liberal billionaire George Soros has a plan to spread his brand of “democracy” to Eastern Europe. But is it really democratic? 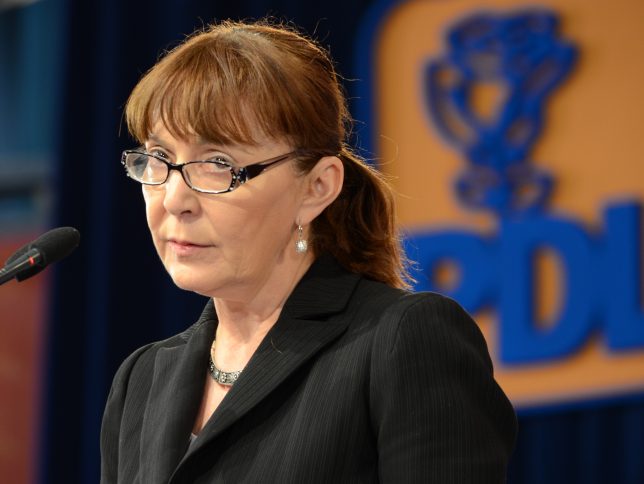 In Part 5 of “George Soros’ Romanian Ghosts,” we investigated how Soros-aligned activists and NGOs collaborated to smear political enemies in the Romanian legislature. In Part 6, we continue the story of how these “open society” activists were lauded by Western media for their “anti-corruption” schemes.

Monica Macovei, the Romanian Minister of Justice and a graduate of George Soros’ school of open society activism, had her targets of supposedly corrupt government officials lined up. The accused included nine judges and prosecutors, eight members of Parliament, and two cabinet ministers. She even indicted Romanian President Traian Basescu’s own deputy prime minister. The outgoing prime minister, Adrian Năstase, went to prison for misuse of public funds in 2012. That investigation also began under Macovei.

In an interview with the website EUPolitix in May 2006, Macovei hinted at her interest in becoming the first EU commissioner from Romania. Echoing the German press, the Bucharest Daily News reported on September 21, 2006, that, with Romania and Bulgaria’s entry into the EU in 2007, “the college of commissioners will have to be expanded to include two more members.” The reports presented Macovei as a strong candidate for the justice position because of her pursuance of powerful politicians.

To widen the corruption ring, Macovei vastly expanded the concept of “abuse of office.” Rather than relying on voters to hold poor-performing or negligent government officials accountable at the polls, Romania’s new prosecutorial class—handpicked, of course, by Romania’s NGO class and funded by Soros and company—could now send them straight to prison. Although it went into effect after Macovei left office, Romania’s new penal code more than doubled the sentencing for abuse of office to 2 to 7 years, and it even omitted the word “knowingly” where it referred to officials’ committing harmful acts, or neglecting to perform their duties.

The consequences could be grim. Health Minister Eugen Nicolăescu found out on television that the National Anticorruption Directorate (DNA) had opened an investigation into him for alleged abuse of office. The investigation cited a renegotiation that had occurred eight years earlier, wherein Romanian Lottery had renegotiated a contract with a Greek company for additional slot machines. Investigators argued that the deal ultimately cost the Romanian company—and thus the state—money, and blamed the losses on Nicolăescu and the other two shareholders who approved the renegotiation.

The National Integrity Agency (ANI) was another Macovei special. This new agency essentially treated all civil servants and their family members as corruption suspects. The ANI required them to declare all their assets and anything that they had sold within the previous year. No such law existed anywhere in the EU—which, ironically, Macovei treated as the gold standard of law and justice. She even bragged that the ANI ended up affecting “about 500,000 people in total.”

“This sounds strange in Germany or France, where such declarations are confidential and just filed with the respective institution,” Macovei acknowledged. “In Romania, this doesn’t work. If in Romania we file it confidentially in an institution, it’s like it does not exist.” Many of these institutions, however, like banks and car companies, are multinationals based in Western Europe. If local branches regularly destroyed records as she suggests, one must wonder why she didn’t take issue with those companies.

According to published minutes made during public debate on the law obtained by the Society for Justice, Macovei only invited members of NGOs to discuss creating the ANI—excluding the judges and prosecutors who would enforce it and whom the policy would most immediately affect.

She also pushed various “progressive” changes to the penal code through Parliament: restricting access to lawyers during hearings, and allowing prosecutors to wiretap and surveil without warrants. When Parliament’s committee on justice wanted to discuss her “reforms,” she became so irritated at them for supposedly stalling “progress” that she stormed out of the meeting and slammed the door.

Macovei’s methods angered every sector of government except the friendly executive branch. The conservative newspaper Ziua called argued that she was “probably the most spoiled minister Romania has ever had.” The minority leader in Băsescu’s governing coalition referred to her tactics as “unconstitutional” and “Stalinist.” Even the Soros Foundation expressed concern that some of her proposals could lead to a police state.

Mircea Ciopraga, in the lower house of Parliament, argued that the new measures and proposals harked dangerously back to the days of communism:

People have more pressing concerns regarding the secret services; specifically, greater control over their activities and disclosure of the crimes of the former communist Securitate, whose heirs are, in part, the current secret services.

Romania did not go through a September 11—nor are there objective chances of that happening. There is no need for a Patriot Act.

But Macovei managed to bypass Parliament through the brand-new Directorate for the Investigation of Organized Crime and Terrorism (DIICOT). Through an emergency ordinance, the administration authorized the agency to intercept phone conversations, surveil individuals, and access bank accounts without warrants. The measure did not trigger widespread public revolt because of the agency’s limited mandate to handle only national security threats and organized crime.

But in its first meeting after Băsescu’s election, the country’s Supreme Council of National Defense had already declared corruption a matter of national security—something only Parliament had the constitutional authority to do. This gave both DIICOT and Romania’s domestic intelligence service authorization to place graft suspects in the same category as domestic terror suspects. It also paved the way for undercover SRI-DNA cooperation—another illegality under Law 303/2004, Article 7, which prohibits prosecutors from collaborating in any way with secret service agents. Furthermore, the public knew nothing about CSAT’s Decision No. 17/28.02.2005. It remained secret until January 2017, when the newspaper Evenimentul Zilei obtained a copy of the order.

Macovei often stressed to Western observers that although Romania had good laws, it needed good people in positions to carry out those laws. But even if she never abused her position, the measures she pushed through—often through emergency decree without Parliament’s input—set up a system that future Ministers of Justice and prosecutors could easily abuse in the name of fighting corruption.

When the Senate passed a non-binding resolution calling for her resignation for corruption of justice and interfering with Parliament, NGOs affiliated with the Soros Open Network rallied to her defense. They knew they could rely on the EU to side with them in any domestic, political dispute because they controlled nearly exclusive access to the EU’s ear. Although the European Union Commission ultimately decided not to intervene, the Deputy Speaker of the German Bundestag warned that Macovei’s removal could trigger EU punitive safeguards toward Romania for abandoning reform efforts.

Meanwhile, the Western European press lavished Macovei with endless praise for her gallant effort in bringing Romania out of the Dark Ages. According to the German Sonntagszeitung, she represented “the other, decent Romania.” Her numerous awards included 2008 European Woman of the Year from the International Association for the Promotion of Women of Europe.

The Senate eventually impeached Băsescu in 2007, and Macovei was soon replaced along with other Băsescu loyalists. Her career, however, did not come to an end. She ultimately went on to win a seat in the European Parliament in 2009.

When confronted in a 2011 interview on Romanian public television about the DNA prosecutors’ abysmal conviction rates, Macovei blamed it on corrupt judges failing to do their jobs. “There are some judges that issue arrest warrants,” she said. “Good for them! We see there are some judges that convict. Good for them!” But delaying convictions remained a serious criticism of the biannual European Commission Evaluation Reports.

“That’s why we entered the European Union, to play by rules—by their rules!”

“Not by our rules?” asked the interviewer.

In Part 7 of Soros in Romania, we’ll look at how Soros’ powerful Romanian activists used their country’s anti-corruption crusade to gain political power—without having to win elections.