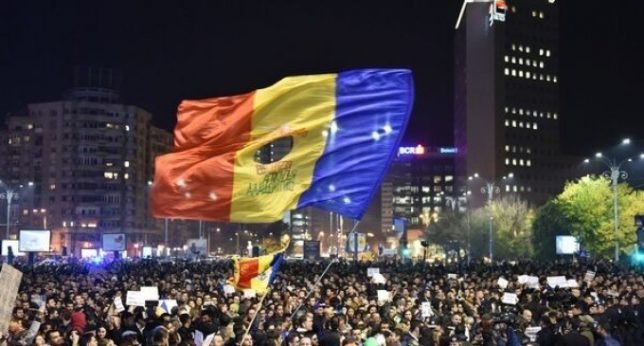 How did 60,000 well-organized protesters in a country of 20 million manage to force the government of Romania to resign? It all started with a fire.

Colectiv, the former Bucharest factory-turned nightclub, had an 80-person legal capacity. But on October 30, 2015, over 400 people—most in their teens and twenties—packed the century-old building, as heavy metal band Goodbye to Gravity released “Mantras of War,” its first album with Universal Music’s Romanian subsidiary.

At 10:00 PM, the band took the stage, and with two shots of pyrotechnics, opened with its lead single “The Day We Die.”

A girl in the audience, who refused to give her name because her parents didn’t know she was there, told the news website Magyar Nemzet that around 10:30 PM she felt sick, and she asked her boyfriend to take her out to get some air. As they headed toward the club’s only exit, two more, larger shots of fireworks sprayed from the stage.

“That wasn’t part of the show,” joked lead singer Andrei Găluț, as a pillar with acoustic foam lit up from sparks that landed too far. He calmly asked for a fire extinguisher—but no one had time to find one.

In mere seconds, the fire climbed to the top of the post. Panic spread, as the ceiling exploded into a gulf of flames, dropping burning debris on the attendees, as they trampled each other to escape. When the crowd forced the club’s double doors open, the gust of oxygen produced an explosion that drove the fire’s temperature over a thousand degrees. Within a minute and 19 seconds, the fire had engulfed the entire dance floor—carbon monoxide and cyanide quickly filling the club, killing many within minutes before they had a chance to reach the door.

The girl who felt sick to her stomach and her boyfriend, meanwhile, waited outside the entrance for their two friends to come out.

“I was the luckiest one there,” she told the paper. “People were barely walking. One of them told us that at the exit, a pile of bodies about [five feet] high had formed that he had to get over.”

One of their friends had burns on 70 percent of his body; the other never made it out. In the end, 64 died, including four of Goodbye to Gravity’s five members and its sole survivor’s fiancée.

In the days that followed, mourning turned to outrage toward Bucharest’s Sector 4 mayor’s office, as many believed that bribes had allowed the club’s owners to operate over capacity and ignore safety codes. But singer Andy Ionescu told Digi 24, a major Romanian television station, that he believed if authorities conducted serious inspections, every club in Romania would be shuttered. Bianca Boitan Rusu, PR manager for an alternative rock band, attributed this to the fact that all the clubs in Bucharest had been converted from former factories.

On November 3, however, tens of thousands took to the streets demanding not only the mayor’s resignation, but also that of Prime Minister Victor Ponta and his entire cabinet for what they saw as the country’s entrenched kickback culture. Many waved the national flag with a hole in the center–reminiscent of the 1989 revolution when demonstrators cut out the communist emblem. 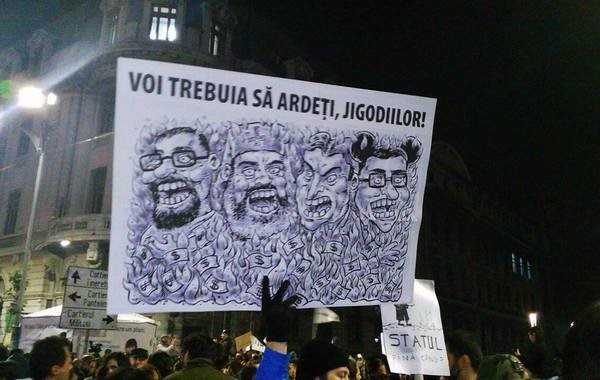 “Corruption kills” became their battle cry, as demonstrators in multiple cities blamed politicians for the tragic deaths. One protester held a sign with the Prime minister, Sector 4 mayor, the Minister of Internal Affairs, and Romanian Orthodox Patriarch in flames, with the message: “You all should have burned.”

On November 4, Prime Minister Ponta gave in to their demands, along with the entire cabinet.

“I hope my resignation … will satisfy those who protested,” he said, adding that it’s impossible to positively govern in a climate of political instability. “I’m not referring to anyone in particular … from my experience, those who bet politically on people’s suffering, sooner or later, will pay a heavy price.”

His opponent Klaus Iohannis, meanwhile, took a victory lap: “My election was the first great step towards this kind of new, clean, and transparent politics [that you wanted],” he told viewers during a televised press conference. “People had to die for this resignation to happen.”

But two days later, the first poll after the tragedy showed a sharp disconnect between the Romanian population and those protesting in the streets.

Only seven percent of respondents said that they held the government responsible for the tragedy, the same percent that blamed the deceased band members. Furthermore, just 12 percent blamed “the political class” in general. 69 percent even rated the government’s response to the tragedy favorably.

Somehow, in a country of 20 million people, less than 60,000 protesters, with the sympathy of less than 15 percent of the population, managed to force the government to surrender. Who was behind it?

In the fourth installment of Soros in Romania, we’ll look specifically at how Soros’ powerful team of Romanian activist “ghosts” rose from to political power.