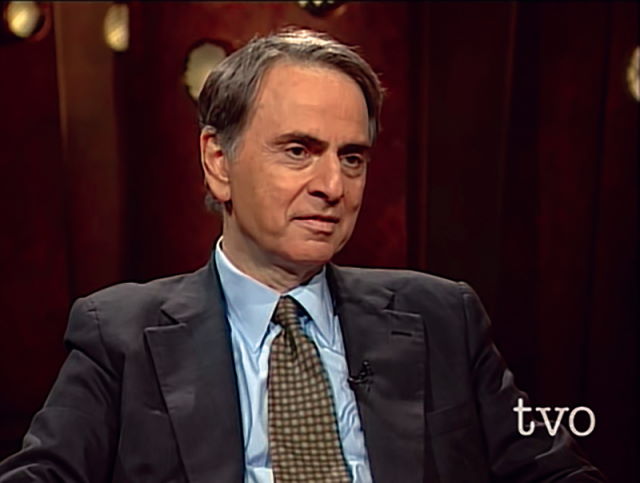 Creation care can be traced to a 1990 “Open Letter to the American Religious Community” from a group of prominent scientists led by Carl Sagan, the late scientist and noted atheist famous for popularizing astronomy with multiple books and a television series. Credit: TVO Docs. License: https://bit.ly/2UDjL3n.
by Hayden Ludwig

“Creation care” is the Left’s most recent attempt to fool right-leaning voters into supporting policies and politicians they would otherwise oppose. It’s old fashioned environmentalism, repackaged with a biblical veneer and marketed as a “gospel issue”—drawing attention to environmental stewardship and public health issues that pro-life Christians have supposedly ignored.

In reality, creation care means redefining the term “pro-life” to incorporate doctrinaire environmentalism—replacing the conviction that life begins at conception with a new definition that’s so meaningless that it can mean whatever they want it to. With today’s hardened Left, that includes redistribution of wealth, open borders, and population control policies.

Far from an expression of biblical principles, creation care is a gateway through which secularists are attempting to march their policies into the churches and preach left-wing progressivism from the pulpits. It’s a grave threat to both Christians’ and America’s religious freedoms—paid for by left-wing mega-donors intent on fundamentally reshaping the United States using global warming fear tactics. Their ultimate goal is clear: split conservative Evangelicals from the Republican Party and pave the way for an increasingly extreme agenda.

It’s unclear who coined the term, but sometime in the mid-1990s “creation care” emerged as the rallying cry for Christian environmentalism. Yet it was by no means universal. This writer has found references to “Earthcare,” an attempted fusion between ecology and feminism from the same period.

The basic theme of creation care is that God’s Creation is in humanity’s hands to enjoy or destroy. It shares proximity with historical Christianity’s understanding of Creation and belief in the Bible’s authority, but takes a low view of God’s sovereignty over the Earth and a very high view of Man’s power over it and the future of the human race. Creation care preaching often reworks Bible verses referencing “those who destroy the Earth” (Rev. 11:18) and have “polluted the land” (Jer. 3:2) to show Man’s mismanagement of nature and natural resources, rather than the consequences of original sin, idolatry, and the Israelites’ infidelity to God as taught in historical Protestant, Roman Catholic, and Eastern Orthodox traditions.

This reinterpretation of the Scriptures suits the needs of a largely secular political agenda. When Paul observed in his epistle to the church at Rome that “the whole creation groans and labors” in pain, he wasn’t referring to the Roman Empire’s missing recycling program.

Creation care might be called an evolution of 20th century theological liberalism, which eschewed doctrines such as biblical inerrancy, imputation, and the resurrection of Christ in favor of Darwinism and “higher” textual criticism of the Bible. But old school liberal theologians rarely pursued policy objectives. Creation care, on the other hand, isn’t about abandoning Scripture so much as redefining words such as “sin” and “redemption” to fit another narrative—one with policy objectives shockingly similar to that of the secular environmental Left.

But where did it start? E. Calvin Beisner, founder of the Cornwall Alliance for the Stewardship of Creation, is the foremost scholar and skeptic on creation care. He traces its origins to a 1990 “Open Letter to the American Religious Community” from a group of prominent scientists led by Carl Sagan, the late scientist and noted atheist famous for popularizing astronomy with multiple books and a television series Cosmos.

The letter warned the faithful of the devastating consequences of global warming, depletion of the Earth’s ozone layer, deforestation, and “global nuclear war which would put at risk most of the population of the Earth.” And it called on the religious community to use “religious teaching, example, and leadership” to “influence personal conduct and commitment” to changing public policy—in short, to subordinate the pulpits to doctrinaire environmentalism.

The letter was already co-signed by 32 Nobel Laureates and numerous scientists when Sagan presented it in Moscow in early 1990 at the Global Forum of Spiritual and Parliamentary Leaders Conference, where it gained the support of some 270 Christian, Muslim, Buddhist, and Hindu religious leaders.

This was a critical era for global warming advocates. In November 1990, President George H.W. Bush signed the Global Change Research Act into law, establishing a new program to conduct research into the human effects on and consequences of climate change. In 1992, representatives from 170 countries met in Rio de Janeiro for the U.N. Earth Summit and declared climate change (linked to the use of fossil fuels) a dire threat requiring global cooperation on “green” policies to solve.

Five years later the Rio summit declaration was followed by the Kyoto Protocol, which dedicated countries to reducing emissions of greenhouse gases—most importantly carbon dioxide (CO2) and methane (MH4)—which were blamed for exacerbating global warming. Although the U.S. committed to reducing emissions, the Senate unanimously informed President Bill Clinton that it would not ratify a treaty that imposed emissions reductions on the U.S. without imposing the same reductions on developing countries due to the harm it would cause the American economy.

Global warming advocates had seemingly done the unthinkable by merging the causes of environmentalism and organized religion. Momentum was with the activists in what quickly became the Left’s first creation care campaign targeting conservative Evangelicals and Roman Catholics for conversion.

Spearheading the charge was a new coalition formed in 1993: the National Religious Partnership for the Environment (NRPE). The coalition included the U.S. Conference of Catholic Bishops, Jewish Council for Public Affairs, and National Council of Churches of Christ (mostly composed of mainline, liberal denominations).

The NRPE was always ecumenical—so much so that its initial executive director, Paul Gorman, is a historical ally of atheists. Gorman was a press secretary for arch-liberal Sen. Eugene McCarthy (D-MN) and a radical environmentalist who once called “the relentless magnitude of environmental degradation” the defining feature of his generation’s “struggle for social justice.” In the 1980s, Gorman headed the Temple of Understanding in New York City’s Episcopal Cathedral of St. John the Divine, then the headquarters of the Gaia Institute, a pagan organization that worships an earth spirit called “Gaia” (the personification of the Earth in ancient Greek mythology).

In his previous role, Gorman organized a “Joint Appeal” of scientists and religious leaders who were invited to host a conference in Moscow by Soviet President Mikhail Gorbachev, and attendees reportedly delivered bizarre speeches on New Age cosmic philosophy and the “enlightenment” of atheism. With fundraising help from Sens. Al Gore (D-TN), Timothy Wirth (D-CO), and James Jeffords (I-VT), this conference evolved into the NRPE. From the start, the NRPE was a creature of the Left created to do the Left’s bidding.

The NRPE claims otherwise. As Gorman put it in a 2002 interview: “We are not the environmental movement at prayer. We are not recruiting shock troops for embattled greens. We are not trying to change a paragraph of legislation in Congress.”

But whatever its spiritual pretensions, the facts strongly suggest otherwise. The NRPE regularly urges Congress to increase funding for the Environmental Protection Agency (EPA), publishes demands that the U.S. transition to 100 percent “clean energy” by 2050, and releases policy prescriptions disguised as prayers such as:

I ask You, Sacred Spirit, to inspire people of faith like me to hold the United States government—especially the EPA—responsible for allowing businesses and corporations to pollute our waterways.

Unsurprisingly, the NRPE has received over $17 million since 1999 from liberal standbys such as the Energy, Hewlett, Rockefeller, Wyss, MacArthur, Packard, Oak, Surdna, and Charles Stewart Mott Foundations. Many such grants are unequivocally for advocacy purposes:

It is also worth pointing out just how liberal these foundations are. The William and Flora Hewlett Foundation, for example, gave $475 million to environmentalist groups such as Greenpeace and the Sierra Club between 2016 and 2019. It’s one of the leading funders of the “eco-Right,” self-identified conservative environmentalists who push for carbon taxes, Big Government cronyism, and global warming policies. The Hewlett Foundation also funds pro-abortion groups such as the Religious Coalition for Reproductive Choice and Planned Parenthood.

The Energy Foundation is a “dark money” pass-through created by major funders—Pew Charitable Trusts, the Rockefeller Foundation, and the MacArthur Foundation—to funnel money to left-wing groups trying to create a “new energy economy.” Recipients include the Environmental Defense Fund, Earthjustice, the Tides Center, and the Natural Resources Defense Council.

In the next installment of “Creation Care,” see how “creation care” emerged as the rallying cry for Christian environmentalism.