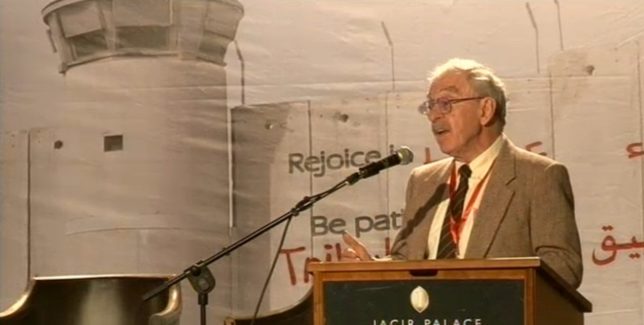 In charge of NRPE’s outreach to conservative Protestants was the Evangelical Environmental Network (EEN), created in 1993 by Ronald J. Sider, a “social justice” activist, Mennonite theologian, and author of numerous books calling Christians to be “completely pro-life” and preach the “whole gospel.”
by Hayden Ludwig

The Return of Christian Socialism?

In charge of NRPE’s outreach to conservative Protestants was the Evangelical Environmental Network (EEN), created in 1993 by Ronald J. Sider, a “social justice” activist, Mennonite theologian, and author of numerous books calling Christians to be “completely pro-life” and preach the “whole gospel.” These are common slogans in the creation care movement, and boil down to mean that, in addition to opposing abortion and same-sex marriage, Christians should support socialized medicine and oppose capital punishment, nuclear weapons, and the reelection of President Trump. Sider has also authored articles for liberal outlets such as the Huffington Post arguing for tax hikes on the wealthy and capital gains to combat the “sin” of income inequality.

EEN launched with an Evangelical Declaration on the Care of Creation, a manifesto for the creation care movement signed by a few hundred pastors nationwide. According to the document, humans “have degraded creation” and “biblical faith is essential to the solution of our ecological problems.” Water and air pollution is “perverted stewardship,” the “earthly result of human sin.” The Evangelical Declaration speaks for itself:

Because we have sinned, we have failed in our stewardship of creation. Therefore we repent of the way we have polluted, distorted, or destroyed so much of the Creator’s work. . . .

We have ignored our creaturely limits and have used the earth with greed, rather than care. . . .

One consequence of our misuse of the earth is an unjust denial of God’s created bounty to other human beings, both now and in the future.

Toward its close, the Evangelical Declaration calls “on all Christians to work for godly, just, and sustainable economies,” blaming much of this degradation on poverty. “Therefore we support the development of just, free economies which empower the poor and create abundance without diminishing creation’s bounty.”

The Evangelical Declaration avoids global warming and only touches lightly on the climate. But it doesn’t have to go further; at its core the document lays out a left-of-center economic agenda cast in a “green” light: increased welfare benefits, redistribution of wealth through a higher progressive income tax, and the expansion of EPA regulatory authority. It’s a fellow traveler to the “environmental justice” pushed by far-left groups such as the Sierra Club, which imagine that “systemic racism and discrimination” block minorities’ access to “clean water and breathable air.”

More specifically, it’s an updated form of the Christian socialism that saw its heyday in the early 1900s. Christian socialists railed against the same social failings as contemporary Progressives—substantial wealth inequality, urban poverty, child labor, corporate greed, and depletion and pollution of natural resources—but from the pulpit, not the soapbox.

One influential Christian socialist, the minister George Herron, sermonized in 1890 that “property,” not (the love of) money, is the root of all evil. He creatively retooled the biblical account of Cain killing his brother Abel, the first murder in history, as the expression of “brutal assertion of self-interest as the law of human life”—capitalism. What the world really needed was Herron’s Christ: not a historical figure but rather the spirit of cooperation and harmony and the incarnate triumph of “labor” over “capital.”

Herron later helped found the Socialist Party (which opposed ownership of private property) and campaigned for its perennial standard-bearer, Indiana Sen. Eugene Debs—perhaps the most radical person to ever run for the presidency on a major party ticket. Christian socialists were always close to Communists and Progressives. Planned Parenthood founder Margaret Sanger, an avowed atheist and Socialist Party member, was guided through the Soviet Union in 1934 by Sherwood Eddy, an American expatriate, universalist missionary, and eager convert to Christian socialism.

Are creation care advocates socialists? The answer varies from person to person and depends upon your definition of socialism.

EEN founder Ron Sider’s politics are a strange grab bag of positions from the Right and Left, but on the environment there’s little daylight between him and the radical Left. EEN’s first director, Jim Ball, is the author of Global Warming and the Risen LORD and multiple Huffington Post articles hailing Obama’s climate agenda (“We shall overcome global warming”). He also attended at least one of the Clinton Global Initiative’s annual summits. EEN’s current president, Mitch Hescox, has called the Sierra Club “a bunch of weirdos,” but in 2019 he co-authored an op-ed with liberal former Rep. Carlos Curbelo (R-FL) praising carbon taxes as a “conservative Green New Deal idea” (although both oppose the actual Green New Deal).

EEN is clearly more a product of the Left than conservatism—even if it’s more comfortable with liberal funding than liberal allies.

The largest known donation to EEN ($331,000 in 2015) is from the Natural Resources Defense Council, a left-wing group. Other major donors include the Energy Foundation, Marisla Foundation, Environmental Defense Fund, Rockefeller Brothers Fund, and the Hewlett Foundation.

In the next installment of “Creation Care,” read the Evangelical Declaration attempt to update Christian socialism for the 1990s.