Nonprofits and Journalism Update: The 1619 Project 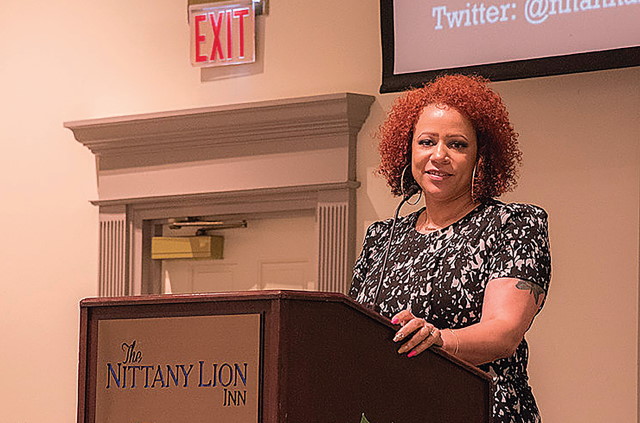 The “1619 Project,” was an effort by New York Times Magazine writer and 2016 MacArthur Foundation fellow Nikole Hannah-Jones to redefine the American founding—from the Revolutionary period to the first importation of enslaved Africans to what would become the original 13 states—with a stated policy aim of securing governmental “reparations” payments to African Americans. Credit: Penn State. License: https://bit.ly/3daKttv.
by Michael Watson

The Pulitzer Center and the 1619 Project

Perhaps the most prominent ostensibly journalistic endeavor since our last review of the media landscape was the “1619 Project,” an effort by controversial New York Times Magazine writer and 2016 MacArthur Foundation fellow Nikole Hannah-Jones to redefine the American founding—from the Revolutionary period to the first importation of enslaved Africans to what would become the original 13 states—with a stated policy aim of securing governmental “reparations” payments to African Americans.

Historians with specializations in America’s Revolutionary and Early Republic periods, including several with left-leaning to radical-left politics, criticized the 1619 Project and especially Hannah-Jones’s framing essay. Despite the criticisms, Hannah-Jones was awarded the Pulitzer Prize for Commentary.

Assisting Times Magazine and Hannah-Jones with the project was the Pulitzer Center on Crisis Reporting (not to be confused with the Pulitzer Prizes, which are awarded by Columbia University). The Pulitzer Center—which is heavily funded by major liberal foundations including the Wallace Global Fund II, Omidyar Network Fund, and Kendeda Fund—was responsible for developing a curriculum to bring the 1619 Project ideology into public school classrooms. For its part, the MacArthur Foundation’s tax returns showed the foundation provided the Pulitzer Center with $650,000 that may align with 1619 Project–like initiatives. For its part, the Pulitzer Center took in revenue of over $13 million in 2018, approximately doubling its usual annual revenues of $5 million to $8 million. From 2016 through 2019, the organization’s net assets more than doubled from $8.5 million to over $22 million.

The Bulwark Follows Its Money

In 2019, it still appeared that the Bulwark—a media project of the Pierre Omidyar–funded nonprofit Republic Affairs (then known as Defending Democracy Together Institute) fronted by ex-Republican commentators Bill Kristol and Charlie Sykes—might evolve into something more than a repository of MSNBC-contributing former Republicans for rent, who seemingly existed solely to support whatever the liberalism of the moment demanded. That has not proven to be the case. Despite ostensibly being created to “conserve conservatism” in the face of the rising populist faction led by Donald Trump, the Bulwark marked its public debut by seeking a puff piece in the liberal The Atlantic and sending left-wing and pro-abortion-feminist scion Molly Jong-Fast to “cover” the Conservative Political Action Conference by, among other things, deriding pro-life activists.

The website now runs pieces by former staffers for conspiracy-minded Sen. Sheldon Whitehouse (D-RI) promoting the Left’s radical and likely unconstitutional H.R. 1 election administration overhaul. Its board chair endorsed the unsuccessful nomination of Center for American Progress head Neera Tanden for a senior position in the Biden administration. To cap it all off, it publishes calls to abolish the Senate filibuster so Democrats can enact the most radical parts of their agenda, such as the labor union–empowering PRO Act. The Bulwark also promotes the historically unsubstantiated idea that the Republican Party “has no prospect for regaining majority status” despite its sub-presidential strength.

This is what some predicted as soon as Republic Affairs’ funding became publicly known: How could an institution funded by prominent liberals like Pierre Omidyar, institutional liberal funders like the Hewlett Foundation, and even arms of the Arabella Advisors “dark money” network become anything other than a Democratic mouthpiece? Conservatives skeptical of Trump-like populism but not prepared to become outright liberals are instead left with the “broken promise” of what Bill Kristol and company’s dissenting website might have been. One hopes the (for-profit and funding-undetermined) project of Jonah Goldberg and Steve Hayes at the Dispatch does not follow the same path.

The Rise of Ideologically Aligned “Newsrooms”

As we noted in our 2019 survey of the nonprofit media landscape, the openly partisan press is as old as the American republic, with Alexander Hamilton’s Federalist Gazette of the United States battling Thomas Jefferson’s old Republican National Gazette. In recent years, liberal activists have launched two major partisan or ideological media efforts aimed at state and local coverage, while conservatives have responded by building out and rebranding their own statehouse reporting network.

Most controversial of these efforts has been Courier Newsroom, an openly partisan project of the ACRONYM network of Democratic-aligned political committees best known for its associations with the creators of the phone-voting application that crashed during the Iowa Democratic Party presidential nominating caucuses in 2020. The left-leaning media watchdog NewsGuard characterized Courier Newsroom as a “clandestine political operation” and noted the $25 million commitment the ACRONYM network had made in Courier and its affiliated ostensibly “local” news websites.

ACRONYM is known to have taken funding from both the New Venture Fund, part of the Arabella Advisors network of liberal “dark money,” and Democratic activist and LinkedIn founder Reid Hoffman. For its part, the Sixteen Thirty Fund—the Arabella network’s electoral advocacy arm—commissioned its own Facebook ad buys, which created what the left-leaning Center for Responsive Politics called “the impression of multiple free-standing local news outlets with unique names and disclaimers” but recirculated identical, national-level talking points.

In the next installment, review the responses from the center and right.