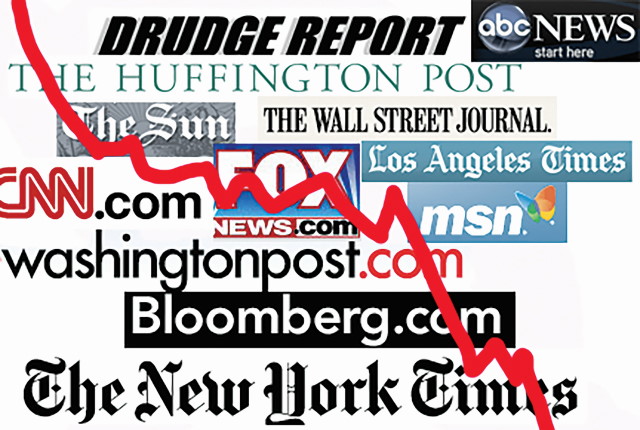 They might have hated him, but Donald Trump and his presidency were good for the liberal media. Major newspapers like the New York Times and the Washington Post raked in tens of thousands of new subscriptions. Credit: MyEyeSees. License: https://bit.ly/35OjDU3.
by Michael Watson

Summary: In early 2019, we surveyed the media landscape with a focus on the role of liberal-backed but nominally nonpartisan not-for-profit news outlets like ProPublica and Center for Public Integrity, which have a notable impact on the creation of news narratives. Since then, the media landscape has evolved substantially. Cable ratings for liberal networks are tanking. Belligerent workplace purges enabled by organized labor at major outlets are becoming commonplace. New, more aggressively right-wing or pro–Donald Trump outlets are taking shape on the conservative side. “Woke capital” is applying greater pressure in the technology industry against political views they oppose. And two major right-of-center outlets, the Rush Limbaugh Program and the Drudge Report, have experienced big changes. Meanwhile, the nonprofit news sector has seen a nominally right-leaning outlet move to the hard left in alignment with its funders. Openly ideological liberal “newsrooms” rise, major liberal donors try to take over newspaper chains, and Big Philanthropy fund an effort to “redefine” America’s founding as based on enslavement and racism.

They might have hated him, but Donald Trump and his presidency were good for the liberal media. Major newspapers like the New York Times and the Washington Post raked in tens of thousands of new subscriptions from members of the “Resistance,” while ratings for both longtime openly progressive MSNBC and newly proud, Democratic partisan CNN surged. Millions of dollars in support from liberal Big Philanthropy flowed to reporting outlets like ProPublica and Center for Public Integrity that attacked the Trump administration.

Then, as quickly as it had started, it was over. But the intervening four years—even the two years since Capital Research Center took a deep look at the world of media—brought disruption and chaos to the media industry from all sides and from diverse actors. The rise of “woke” ideology has seen labor unions assist in organized purges of metropolitan newspaper staff found insufficiently committed to social liberalism and a public square closed to its opponents.

Meanwhile on the right, the 800-pound gorilla of Fox News faces new rivals perceived as more aligned with right-wing populism or the personal interests of former President Trump. Big technology conglomerates have taken a more aggressive approach to suppressing content that conflicts with the immediate political advantage of “current year” progressivism. And two giants of the right-leaning media scene—Rush Limbaugh, who died in 2021, and Matt Drudge, whose website the Drudge Report has swung inexplicably into alignment with the left—have exited.

The nonprofit news media have also seen changes over the intervening period. The Bulwark, a website that originally sought to stake out a Trump-hostile but still conservative ground, has moved into alignment to the orthodox progressivism of its major funders. Conservatives have created the Center Square, a nonprofit news project focused on statehouse reporting, while liberals have promoted the Newsroom Network, a liberal statehouse reporting outfit that grew out of the Arabella Advisors “dark money” network, and Courier Newsroom, an openly ideological “news” source closely aligned with the political consultancy network of Tara McGowan, the founder of the advocacy group ACRONYM. Perhaps most prominently, liberal Big Philanthropy partnered with the New York Times Magazine to promote a fundamental restructuring of American history education through the “1619 Project,” a nominally journalistic effort that seeks to recenter the American founding on the first landing of enslaved Africans in British North America.

The Media State of Play

As President Joe Biden took office in January 2021, the liberal press immediately faced a quandary: Having achieved its political aim, its audience collapsed. CNN spent the Trump administration aggressively shifting from a moderate-liberal, fact-based position to little more than regurgitating press releases from the Democratic National Committee, and it saw its ratings fall by half after President Biden’s inauguration. MSNBC, traditionally the liberal cable news network of choice, saw its ratings fall by one-third.

Labor unions historically protect workers from being fired, and they often pride themselves on protecting workers’ political advocacy against management retaliation. But in recent years media unions—notably the NewsGuild, the union of journalists affiliated with the aggressively left-wing Communications Workers of America—have organized or supported purges against workers not sufficiently committed to current-year social liberalism, especially on matters of race and criminal justice.

Even before Biden’s inauguration, the “woke” progressive ideology rising in metropolitan newsrooms generated a wave of purges tacitly or even explicitly endorsed by the labor unions that represent journalists at major newspapers. In June 2020, the New York Times published an op-ed by Sen. Tom Cotton (R-AR) that called for the use of military force to put down riots and disorder. The newsroom staff revolted, pressuring the paper to denounce the op-ed. Reporting indicated that the NewsGuild of New York, the local union that organizes Times journalists, had coached the Jacobin faction of staffers to couch their protest in terms of workplace safety.

Biden’s inauguration did not quiet the restive “internal mob.” In February 2021, the New York Times pressured science writer Donald McNeil to resign over his utterance of a racial slur in identifying the word. Longtime union activist Steven Greenhouse, formerly the Times’s labor-beat reporter and a writer on labor topics for the left-leaning The Guardian, protested that the NewsGuild had not taken action on McNeil’s behalf, reportedly writing on a Times staff-and-alumni message-board, “What ever happened to the notion of worker solidarity . . . to giving a fellow worker the benefit of the doubt?”

Into the Tank: The Right’s Competitors to Fox

Meanwhile on the right, Fox News and the related entities owned by Rupert Murdoch’s corporate empire continue to be the largest players in the space by far, but new challengers are approaching. Fox’s election analysis team projected that Trump would lose Arizona early on election night, contrary to other election analysts who waited for reporting of much of the late-counted ballots (which were far less Democratic-leaning than Fox projected) before projecting that Biden won the state. Fox blew its call on the House of Representatives, projecting Nancy Pelosi’s Democrats would expand their majorities when Republicans had in fact cut them to the narrowest since the turn of the millennium.

These apparent acts of rooting for the Democratic Party outraged a faction of Republicans most supportive of former President Trump, and they migrated from Fox to Newsmax and One America News Network (OANN), two upstart cable channels more “in the tank” for Trump. For his part, Trump—who is reportedly a personal friend of Newsmax chief Christopher Ruddy—promoted both OANN and Newsmax throughout the campaign and post-election period. In December 2020, the unthinkable even briefly happened: A Newsmax program outdrew a Fox program in the “key demo” of viewers 25–54 years of age.

According to a survey by Republican pollster Tony Fabrizio, while nearly half of Republican voters watched Fox News at least weekly, the two factions he identified as closest to former President Trump and the right-wing fringe viewed the two smaller upstarts almost as much if not more than Fox.

But while the upstarts have made headlines, Fox still leads in the ratings according to reports compiled by the Deseret News. The network had 3.6 million nightly viewers in 2020, compared to Newsmax’s peak of 495,000 in the month of the 2020 elections.

In the next installment, follow the surge of liberal cancellation efforts.