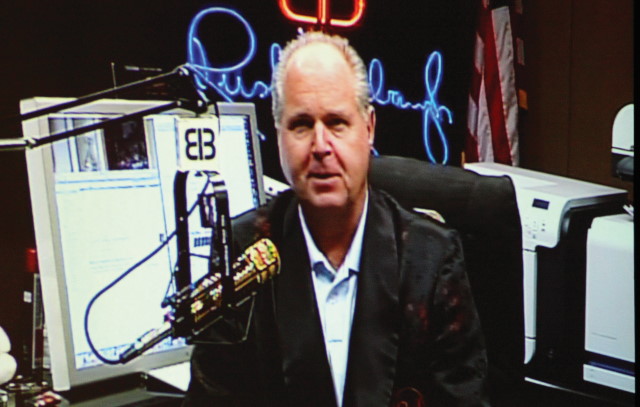 Rush Limbaugh had essentially created the modern conservative talk radio ecosystem in the wake of the repeal of the Fairness Doctrine in the late 1980s, in addition to being its public face. Credit: Gage Skidmore. License: https://bit.ly/3daWgIq.
by Michael Watson

As the for-profit right-of-center media are embroiled in turmoil, left-wing activists in both the for-profit and nonprofit sectors are seeking to de-platform the right-of-center networks and to silence right-of-center reporting. Perhaps the most prominent action before the 2020 election was the major social media companies’ effort to prevent the circulation of New York Post reporting on the contents of a laptop computer allegedly belonging to Democratic nominee Joe Biden’s son Hunter that appeared to implicate both Bidens in possibly corrupt activities.

Earlier in the year, NBC News’s News Verification Unit pushed a campaign by the British nonprofit Center for Countering Digital Hate (CCDH) targeting the right-leaning news and commentary website the Federalist. CCDH’s “Stop Funding Fake News” project had targeted the Federalist and other right-of-center and far-right outlets for reporting and commentary critical of Black Lives Matter and demonstrations following the death of George Floyd in police custody (later determined by a Minnesota jury to have constituted unintentional murder). Google issued a warning threatening to remove the Federalist from its advertising platform. After criticism, Google declared that the Federalist’s comments section had placed it in violation of its terms of service, and Google allowed the site to continue advertising after the comments section was temporarily removed.

Liberal cancellation efforts surged in the wake of the demonstration in Washington, DC, addressed by then-President Trump and the subsequent riot at the U.S. Capitol during the counting of Electoral College votes on January 6, 2021. MSNBC commentator and Aspen Institute fellow Anand Giridharadas openly asked in a now-deleted Tweet, “Should Fox News be allowed to exist?” PolitiFact co-founder Bill Adair proposed a “bipartisan commission to investigate the problem of misinformation.” New America strategist Peter W. Singer analogized online speech to open warfare. By April 2021, liberal groups including the Center for American Progress, Common Cause, Electronic Frontier Foundation, and Voto Latino had sent a letter to the Biden administration calling for the creation of a federal task force to issue “a comprehensive set of principles and overall policy, funding, and legislative recommendations for addressing disinformation,” while purporting to consider “protection of free expression.”

Oliver Darcy and Brian Stelter, CNN’s in-house critics of right-leaning media, have called on cable carriers to drop One America News Network and Newsmax. Other commentators echoing Giridharadas have called for similar action against Fox. Media Matters for America, which has a longstanding campaign against Fox News, has continued to push for cable providers to cut Fox News from their offerings and to demand that advertisers stop buying ads on the channel.

Big Changes on the Right

While Fox News and the other Murdoch properties are the largest voices on the right, other independent voices like Rush Limbaugh and Matt Drudge have also contributed. However, for different reasons, those two particular voices are no longer part of the media landscape in the ways they once were.

Limbaugh, of course, succumbed to a years-long battle with cancer in early 2021. Limbaugh had essentially created the modern conservative talk radio ecosystem in the wake of the repeal of the Fairness Doctrine in the late 1980s, in addition to being its public face. His passing marked “the end of the 1990s Right” to some, with Limbaugh among the last of a set of figures who defined conservative advocacy and politics in the age of the Gingrich Revolution to exit the scene amid the 2020 election season. Others warned of the drawbacks of Limbaugh’s style, warning that “to the extent that the populists like Limbaugh and [his personal friend President] Donald Trump have become the face of conservative politics, they have driven away people who are otherwise conservative but cannot imagine trucking along with people who say ‘Feminazis.’”

More mysterious is what has become of Matt Drudge’s Drudge Report website, once a titan of the right-of-center internet media. Noting the site’s drift from oppositional populist-leaning conservatism to orthodox current-year progressivism, the Tablet reported on speculation by former associates of Matt Drudge who suggested he may have relinquished control of the website or sold it. Tablet reported that Lucianne Goldberg, a onetime associate of Drudge who worked with him in breaking the Monica Lewinsky scandal, believed that “It’s a totally different publication” and “It’s just so obvious that he’s not interested, that somebody else is doing it,” though Goldberg had not spoken to Drudge in a half-decade.

Ultimately, Tablet’s reporter could not conclusively determine what had happened at the website amid a total change in tone, a potential for genuine disappointment in the Trump administration’s inability to deliver on Matt Drudge’s immigration restrictionist preferences, or the complicated and opaque world of online advertising. The reporter concluded: “Whether through a payday, political apathy, or a newfound slackerdom, Drudge might have actually pulled off everyone’s dream: making bank and then logging off.”

Developments in the Nonprofit News Sector

The nonprofit news sector that we profiled in 2019 has also evolved. Through 2019–2020, the “Trump bump”—a surge in revenue to the major left-leaning nonprofit news outlets, largely from foundation sources—dissipated somewhat. Of the three major nonprofit news gatherers profiled in our 2019 piece, only ProPublica maintained most of its increased Trump-era revenue.

Revenue in the Nonprofit News Sector

In the next installment, trace the funding of the Pulitzer Center and the 1619 Project.