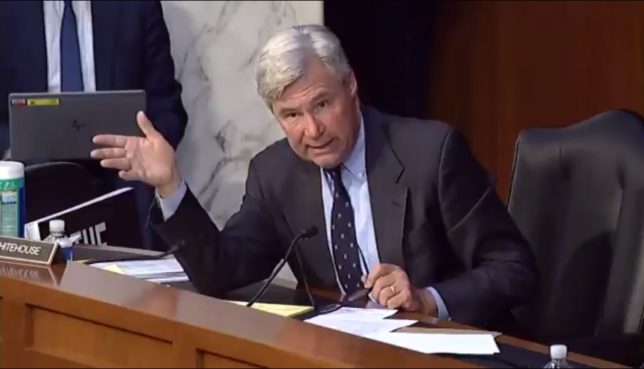 “Expressing the sense of the Senate that dark money undermines the integrity of the judicial system and damages the perception that all people receive equal justice under law.”

“The Conservative Alliance PAC, which can raise and spend unlimited sums of money, targeted several House Republicans with mailers, radio ads and other attack ads.”

“The great bulk of its funding has come from so-called dark money — funds from donors who are not legally required to reveal their names.”

“Nonprofits that spend money to influence elections but are not required to disclose donors to the public—called ‘dark money’ groups by critics—no longer need to share their donors’ names or addresses in their tax filings under a new Treasury rule announced Monday.”

“The state Senate budget committee is hours away . . . from voting on a bill that would force so-called ‘dark money’ groups to disclose their donors.”

It “would require 501(c)4 organizations to release names of donors if they spend more than $10,000 ‘influencing or attempting to influence the outcome of any election or the nomination, election or defeat of any person to any State or local elective public office or the passage or defeat of any public question.’”

“‘The increased prevalence of ‘dark money’ in electoral politics has been a troubling development in recent years, and the use of our tax code to shield the identities of donors represents one of its most egregious manifestations,’ King said. ‘It is time for an end to this dark money game.’”

“For the first time since the 2010 Citizens United Supreme Court decision, which struck down campaign spending limitations for corporations and unions, liberal ‘dark money’ groups outspent conservative groups, according to a new report from Issue One that analyzed data from the Center for Responsive Politics.

“Dark money groups spent $150 million in the 2018 midterms. And unlike super PACs, which must disclose their donors to the Federal Election Commission, these politically active nonprofits are not required to do so.”