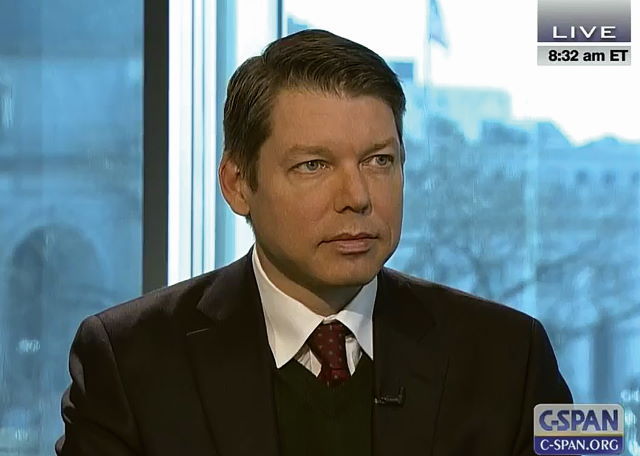 A decade ago, Bill Allison of the Sunlight Foundation was looking for a short phrase to put before the following fact: “Of the 202 outside organizations spending money to influence the 2010 mid-term elections, just 93 of them have disclosed donors to Federal Election Commission.” Allison settled on the phrase “dark money,” and that’s reputedly the first use of the term. Credit: C-SPAN. License: https://bit.ly/3bj0Geq.
by Michael E. Hartmann

A decade ago, Bill Allison of the Sunlight Foundation was looking for a short phrase to put before the following fact: “Of the 202 outside organizations spending money to influence the 2010 mid-term elections, just 93 of them have disclosed donors to Federal Election Commission” (FEC). The fact was the first one reported in Sunlight’s online “Daily Disclosures” on October 18, 2010.

Allison settled on the phrase “dark money,” and that’s reputedly the first use of the term. Short, pithy, ominous. Sunlight—a left-of-center, government-transparency advocacy group plagued by scandals—must have liked the way the term put a negative connotation on money spent by groups not legally required to disclose the original sources of their funds.

The nonprofit “outside organizations” to which the Sunlight Foundation referred are tax exempt under Section 501(c)(4) of the Internal Revenue Code. These “social welfare” groups are permitted to engage in partisan political campaign activity and lobbying, as long as it’s not their “primary” purpose or activity. And when these groups spend money on politics, they report that spending to the FEC. But Sunlight was unhappy with the fact that (c)(4) groups do not have to publicly report who originally gave them the money. The identity of those donors remains private.

Hence the adjective in “dark money.”

The Sunlight Foundation advocates for “largely center-left government transparency measures,” as InfluenceWatch explains. Allison, the Sunlight staffer, was an investigative journalist for the Center for Public Integrity—“a left-of-center journalism group,” InfluenceWatch notes—and the Philadelphia Inquirer. He is now a reporter for Bloomberg.

At least initially, the term “dark money” was used to characterize support of tax-exempt organizations that are categorized under Internal Revenue Code § 501(c)(4). The term’s application has since been broadened quite a bit beyond that.

By its own terms, § 501(c)(4) nonprofit groups are “Civic leagues or organizations not organized for profit but operated exclusively for the promotion of social welfare.” As part of their mission, they may engage in unlimited legislative advocacy and some partisan political-campaign activity, as long as the latter is not their “primary” purpose or activity. As part of what can be considered the bargain they cut with the state, and with their donors, donations to (c)(4) groups are not tax-deductible—and they do not have to publicly report their donors to the Federal Election Commission (FEC), except for certain contributions raised for independent-expenditure campaigns. (The law on what must be reported under such circumstances is murky at the moment.)

Hence the adjective in “dark money”—the negative connotation of which helpfully served a post-Citizens United v. Federal Election Commission purpose to some, mostly liberals reviling the 2010 decision and its effects. Citizens United, recall, famously held that limits on speech about candidates by corporations, associations, or labor unions were unconstitutional, just as they are for individuals. Groups under tax law’s § 501(c)(4) were an already-existing stream through which such funding could, and can still, easily flow.

After Citizens United, others wanted to serve that same negatively connotative purpose behind the early usage of the “dark-money” term in other contexts. They thus journalistically and polemically broadened the term to additionally describe support of a wider range of groups and projects, including non-(c)(4) ones.

What originally gave rise to § 501(c)(4) itself, to the degree it’s possible to explore, and how has it changed, if at all? What were (c)(4)s before Citizens United—before they became what they are? Or at least what they’re currently considered, or now labelled? What were they during the decades leading up to the “darkness” being deemed descriptive of their support?