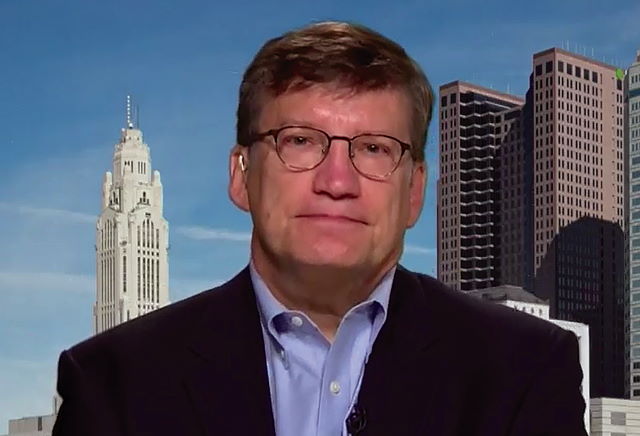 Bradley A. Smith, a prominent defender of free political speech and a former FEC chairman who now chairs the Institute for Free Speech, observes that “dark money” is “merely a pejorative label for nonprofits—such as the NAACP, the Chamber of Commerce, and Planned Parenthood—that may not legally make campaign contributions. Credit: C-SPAN. License: https://bit.ly/2ONQkvJ.
by Michael E. Hartmann

A Definition of “Dark Money”

Sunlight and the Center for Public Integrity are just two among many organizations and allied journalists that track and criticize “dark money.” These groups almost always use the term based on the same understanding as Sunlight’s.

They typically call (c)(4)s “political nonprofits” and often note that (c)(4)s can give money to “super PACs”—a new type of group that arose in the wake of Citizens United that can raise and spend unlimited sums on politics, provided they do not coordinate with or donate to a specific political candidate. Although super PACs are required to publicly disclose their donors, they can themselves raise money from (c)(4)s, whose original donors need not be disclosed, thereby making the money “dark.” Any original individual donor, of course, may just not want public disclosure of his or her name, home address, occupation, and employer to a political opponent, nosy neighbor, friend, dentist, or the like.

When “the source of political money isn’t known, that’s dark money,” according to a definition from the Center for Public Integrity. “The two most common vehicles for dark money in politics are politically active nonprofits and corporate entities such as limited liability companies. Certain politically active nonprofits—notably those formed under Sections 501(c)(4) and 501(c)(6) of the tax code—are generally not required to publicly disclose their donors.” (Section 501(c)(6) groups are business associations like the Chamber of Commerce, some of which make public their corporate dues-paying members in order to enhance their lobbying efforts.)

“Meanwhile, when limited liability companies are formed in certain states, such as Delaware and Wyoming, they are essentially black boxes; the company’s name is basically the only thing known about them,” the Center continues. “These LLCs can be used to make political expenditures themselves or to donate to super PACs.”

The Center for Responsive Politics, which maintains the popular OpenSecrets.org website, may be the biggest user of the “dark-money” term. According to its definition, “Dark Money refers to political spending meant to influence the decision of a voter, where the donor is not disclosed and the source of the money is unknown. Depending upon the circumstances, Dark Money can refer to funds spent by a political nonprofit or a super PAC.” While super PACs “are legally required to disclose their donors, they can accept unlimited contributions from political non-profits and ‘shell’ corporations who may not have disclosed their donors.” In those cases, “they are considered Dark Money groups” by the Center for Responsive Politics.

Bradley A. Smith, a prominent defender of free political speech and a former FEC chairman who now chairs the Institute for Free Speech, observes that “dark money” is “merely a pejorative label for nonprofits—such as the NAACP, the Chamber of Commerce, and Planned Parenthood—that may not legally make campaign contributions, whose donors are private, and whose political speech is therefore both limited and independent from candidate campaigns.” One longtime political operative has offered a more cynical definition: “‘Dark money’ is money that supports speech the Left wants to silence.”

What Else Constitutes “Dark Money”?

If concealment, on purpose or in effect, of the original donors to certain nonprofits is the controlling characteristic of “dark money,” then other revenue streams would fairly fit within the definition. These flows, which attract much less attention in the debates over politics and advocacy, go through groups that are tax exempt under Section 501(c)(3) of the Internal Revenue Code. These groups include public charities that take an interest in public policy, such as the Sierra Club and the Brookings Institution. Among (c)(3) charities that are policy-oriented—that is, not counting groups like art museums, symphonies, and soup kitchens—liberal groups enjoy a roughly three-to-one money advantage, as CRC’s Citizens United study found. The same study also found that the river of money flowing into public policy debates through these (c)(3) groups dwarfs the money flows in the (c)(4) and super PAC stream. The latter totaled about a half-billion dollars ($538 million) for the 2013-14 election cycle, whereas in 2014 alone, we counted $9.6 billion flowing through policy-oriented (c)(3)s.

In the (c)(3) flows that could constitute “dark money,” two phenomena are worth examining: fiscal sponsorships and donor-advised funds (DAFs). Fiscal sponsorships essentially allow an existing (c)(3) organization to confer its own tax-exempt status on a new project that is supposed to share the existing group’s charitable purpose. The sponsored project hasn’t achieved its own (c)(3) status, and may never even intend to become an independent entity. It may be happy to maintain its dependent existence because that helps to hide what it’s doing, and/or it may intend to wage a particular brief political fight and then disappear. These kinds of shadowy projects run counter to the traditional justification for fiscal sponsorship, which was originally portrayed as a temporary measure to “incubate” new (c)(3)s that would go on to become independent legal entities.

In other words, fiscal sponsorship is highly susceptible to abuse, and abuses may, in fact, be rife. The scheme certainly can conceal an original donation that may never be publicly linked to the new, sponsored project. And that new project may not last long; short-term, “pop-up” sponsored groups seem increasingly common. (“Pop-up” super PACs are also becoming common.)

So if the sources of the funds spent are concealed, can fiscally sponsored projects be considered “dark?” They certainly seem to fit the OpenSecrets definition of “dark money.”

Many low-profile, left-of-center (c)(3) groups offer fiscal sponsorship as a regular service. They include the large Tides Network, the New Venture Fund (administered by the for-profit and fee-charging Arabella Advisors consulting firm), and the Alliance for Global Justice, as well as the Sustainable Markets Foundation in the environmental field.

In the next installment, note the growth of donor-advised funds.