Wokeism in Private Schools: No Bridge Is Too Far 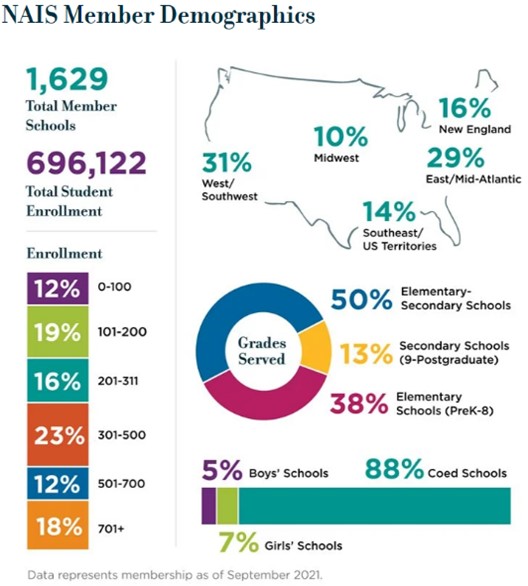 No Bridge Is Too Far

In contrast to government education, private schools have historically been considered a safe harbor for students to receive religious and socially conservative teaching—or at least a quality education. Yet every one of the parents I spoke with eventually discovered that the same organization was at the root of it all.

NAIS, which was founded in 1962, oversees a set of regional accreditation affiliates in the U.S. covering 1,600 nonprofit schools enrolling nearly 700,000 K–12 students, plus another 300 independent colleges. That system might be of great value to parents who want to ensure they’re sending their kids to a quality school. As a network of networks, it’s also a rich target for cultural Marxists.

NAIS started taking a more political role in 1993 when it moved its headquarters from Boston, Massachusetts, to Washington, DC, to promote “expansion in the areas of government relations and public affairs.” NAIS reports from the past 30 years suggest a strong leftward bias in the group’s leadership, with even its use of the term “independent education” taking on Orwellian overtones. “The NAIS board in 1992 was a living example of diversity in independent education,” wrote former NAIS president Peter D. Relic (1991–2001):

Of the 24 directors, there were six people of color, and there were 10 women and 14 men. The board enthusiastically supported both the expansion of the staff. . . and the commitment to bring true diversity to the staff; by the mid-90s, firmly relocated in Washington, the staff was 40 percent people of color. As a staff, we made a policy decision: in every personnel search, there would be at least one person of color.

Those protocols appear to remain in place today, with the NAIS Board of Trustees reporting that it’s “committed to diversity and actively seeks those belonging to underrepresented communities.” The group’s most recent annual report similarly lists “championing inclusivity” and “embracing diversity” among its values. Its own history even bizarrely quotes radical activist Tom Hayden.

One wonders if ultra-woke ideologues are an underrepresented minority, given the presence of the disgraced radical ex-headmaster Robin Appleby on the NAIS board.

In November 2021, Appleby was booted from her prestigious, $550,000-a-year position at England’s most expensive private school (the American School in London) after parents revolted against its far-left DEI curriculum. Under Appleby’s tenure, parents were reportedly instructed on how to “raise anti-racist children” and “recognize their own implicit biases,” gym classes were replaced with debates on “politics in sport,” and teachers accused students of being “oppressors” culpable of “white fragility” and “white guilt.” It’s unclear whether Appleby, who resigned in January, will remain on the NAIS board in 2022.

In addition to more traditional educational goals like computer literacy, the DC-based association’s new curriculum included teaching students to “become thoroughly knowledgeable about the environment before the earth is no longer viable for human beings (even though the truths might be inconvenient)” and emphasizing “the themes of equity and justice and to explore the multiple definitions of diversity.”

“Equity” and “equality” aren’t synonyms. Most Americans believe that all citizens should be treated equally before the law, in job interviews, by retail businesses, and so on, not according to their sex, beliefs, or heritage.

Not the Left. Mandating “equity” means equal outcomes, which necessarily means treating people unfairly—in the name of fairness. Hence, the flood of race-based hiring quotas in major companies, anti-Asian American discrimination by university admissions apparatchiks, the arbitrary lumping different ethnic groups together in the U.S. Census, and castigation of supposed “white privilege” in recent years. Be it critical theory on campus or DEI practices in the boardroom, all are the poisonous fruit of the same vine.

In the next installment, NAIS has been quietly ramping up its agenda for decades.