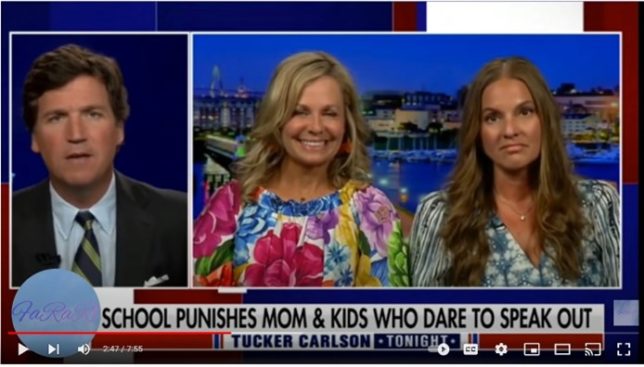 Undercover Mothers was started in mid-2021 after Amy Gonzalez (right) and Andrea Gross (center), two mothers in Ohio, fought back against the critical-race-theory curriculum being taught in their kids’ private school—only for their children to be expelled. Credit: FaRaRi. License: https://bit.ly/3KKP7N8.
by Hayden Ludwig

Summary: Don’t be fooled: No school is safe from the radical Left’s ideology of racism, historical revisionism, and hatred. Most parents are familiar with how this disease—dubbed “wokeism”—has conquered public school systems in many Democratic-run states. But the woke curriculum is rapidly overtaking nonprofit, private schools across America. If it isn’t stopped, no child will be safe from its indoctrination.

If you thought your children were safe from the Left’s culture war in a private school, think again. Across America, a pandemic of “woke” ideology is quietly spreading through privately run schools and colleges supposedly shielded from government control.

Proponents may call this new teaching “diversity, equity, and inclusion” (DEI), but that’s a euphemism for a dark agenda: inculcating kids with the Left’s malicious obsession with race. Far from promoting independent thought, it’s a campaign to crush dissent and rewrite history while teaching children to hate one another for the color of their skin.

The public is almost completely unaware of how activists are indoctrinating America’s youth with transgenderism, racial segregation, and other far-left “virtues”—and still would be, if not for the efforts of a handful of courageous moms bent on exposing the truth.

Meet Undercover Mother, a group of roughly 100 volunteer moms and dads from across the nation engaged in some of the finest investigative journalism happening today. These Undercover Mothers are fighting in the trenches to defeat the radical Left’s agenda that’s taken over our schools. If they succeed, it’d mean nothing less than saving America’s nonprofit schools—and the students they teach—from the radical Left.

So who are these moms and dads? The group was started in mid-2021 after Amy Gonzalez and Andrea Gross, two mothers in Ohio, fought back against the critical-race-theory curriculum being taught in their kids’ private school—only for their children to be expelled.

“We tried, in the best way possible, to represent and speak up not only for our children but also our teachers,” Gonzalez told Fox News in July 2021. “At a private school, they did not have a union. I believe a lot of it is coming from The National Association of Independent Schools” (NAIS), a national body that oversees the country’s private school accrediting bodies.

Her hunch forms the basis of Undercover Mother and its deep dives into NAIS, the organization responsible for enforcing leftist ideology on campus.

Undercover Mother is a truly grassroots organization, with volunteers in numerous states. While many of its members are conservative or right-leaning, the group doesn’t have an ideological or partisan agenda. All of its members share the same goal: Halt the extreme, bigoted, and hypersexualized doctrines NAIS pushes on students and return schools to what they’re supposed to be doing—equipping students to be mentally strong, intellectually curious, problem-solvers ready to face the world.

Horror Stories from the Black Lagoon

Every volunteer that I spoke with shared his or her horror story about discovering what leftists were teaching their kids. No matter where they live, the experiences are the same.

One parent in Georgia recalled how her kids’ school chapel invited a Muslim cleric, gay wrestler, and an anti-Semitic, radical black poet as guest speakers and to work with students. The school was later “outed” for “keeping a list of ‘insubordinate’ parents.”

“My kids came home with stories about racism that weren’t actually racist,” another anonymous parent in the Midwest told me. “Kids were taught that all civilizations had slaves but America was by far the worst,” using as a textbook the far-left revisionist historian Howard Zinn’s A Young People’s History of the United States, which paints American history as irredeemably evil. “Kids were made to ‘break down their identity.’ White boys were taught that they were dominant oppressors.”

The experience was so eye-opening that it changed her political beliefs, though she still considers herself a “traditional liberal.” “I feel like I’ve been lied to about progressive policies,” she explained. “Nothing about my liberal past is in line with these progressive policies that are ruining an entire generation of kids.”

One of the founders of Undercover Mother—who considers herself “very liberal”—recounted how the head of her child’s school gave a 20-minute speech “arguing the need for a social justice curriculum as a war of countering the privilege that we had without one mention of academics or life skills.” Two years later in 2016, the school sent emails assuring parents that it was creating a “’safe space’ for the children” following Donald Trump’s election.

“I was surprised to see they were filtering down politics into the curriculum,” she added. “The school had essentially shut down the idea of freedom of thought in front of everyone.”

In the next installment, the march of woke ideology through private schools has been different than in public schools.