Wokeism in Private Schools: Go Woke or Get Out 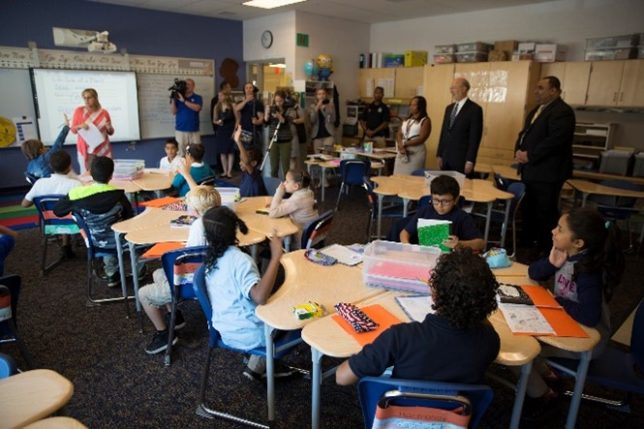 The strong influence of left-wing activists and teachers unions like the American Federation of Teachers (AFT) and National Education Association (NEA) on the public education system is universally acknowledged and well-documented, even in conservative states. Credit: Governor Tom Wolf. License: https://bit.ly/3MOB5w1.
by Hayden Ludwig

Go Woke or Get Out

These themes are now central to NAIS’s accreditation standards, which means many of the country’s top schools are barred entry unless they agree to enforce “woke” ideology on campus. Not every private school has surrendered, of course, but NAIS holds a virtual monopoly on teacher training tools and vital market research. Non-woke schools risk losing accreditation and their competitive edge if they don’t comply.

NAIS has been quietly ramping up its agenda for decades. So why are most parents only hearing about it now?

“I believe the NAIS has been pushing DEI since the early 2000s, but the language has changed,” one Undercover Mother in Atlanta, Georgia, told me over email. “As far back as 2005 there was a movement toward focusing on race. But by 2015, there was a marked shift toward activism, and then by 2020 ‘DEI Practitioners’ were part of the regular conversation.”

A volunteer in New York City explained how woke ideology has made it harder for schools to assess their effectiveness. “Private schools have embedded a social justice curriculum that encompasses [DEI] and gender spectrum policies, transforming mission statements of independent schools”—where local tuition rates range as high as $60,000—”into a word salad that is unclear and comes with no metric for tracking its performance,” she said. “Our Head of School makes over $1 million [per year]. That’s a high salary for someone in education to pass on. Even if they disagree with what they’re promoting, they can’t say so for fear of being removed.”

A simple search of the NAIS website reveals dozens of articles and webinars on how to spread this ideology to classrooms:

One article encourages parents and teachers with “a thoughtful exercise” by comparing themselves to George Floyd’s killers: “Whose necks are you kneeling on? When black and brown people can’t breathe, can they tell you? If they told you they can’t breathe, would you hear them? If you heard them, what would you do?”

Another article supports a “play-based curriculum that explicitly affirms racial identity . . . for students of color in predominantly white spaces”—for toddlers.

Whether parents know it or not, these dogmas are prevalent in many NAIS member schools. The Milton Academy in Massachusetts (annual tuition: $65,000), a boarding school for grades 9–12 in Massachusetts and NAIS member, offers students helpful resources on intersectionality, the gender spectrum, implicit bias, racial identity (“What Do We Call People of Multiple Backgrounds?”), and other educational links to the hate-spewing Southern Poverty Law Center (SPLC), discredited Anti-Defamation League, and overtly partisan American Civil Liberties Union (ACLU).

Following the violent clash between members of the far-left Antifa and far-right counterprotesters in 2017 in Charlottesville, Virginia, NAIS published a “Post-Charlottesville Resource List.” Teachers are encouraged to address “racism and hatred in the classroom,” while “white parents” were taught ways to “talk to their young kids about race.”

One article from Colorlines, an extremist magazine for “social justice” and anti-white commentary, is titled: “The Dos and Don’ts of Talking to Kids of Color About White Supremacy.” Another offers “100 Race Conscious Things You Can Say to Your Child to Advance Racial Justice.”

Those dogmas are transmitted down through NAIS’s regional affiliates. The Independent Schools Association of the Central States (ISACS), which covers K-12 schools in the greater Midwest, hosts an entire webpage on DEI echoing NAIS propaganda. Samples include:

In the next installment, NAIS’s most potent tool for spreading “woke” ideology is its annual conference.