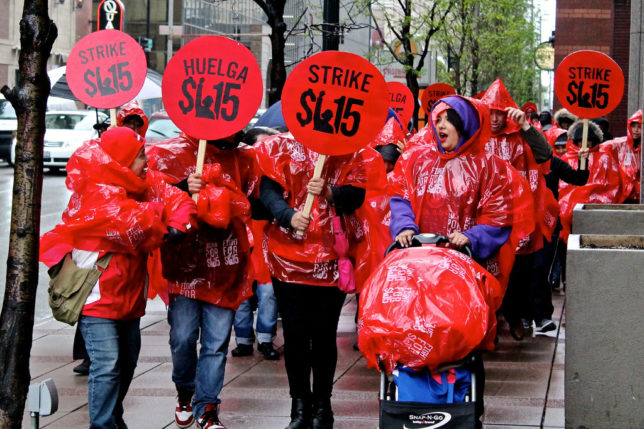 The government releases statistics each year showing how many workers are members of unions, and the trend is undeniable: Big Labor continues to lose importance in the American workforce. This year’s results from the Bureau of Labor Statistics (BLS) follow the long-term trend.

Do not expect unions to take their continued decline as an impetus to reform themselves or change their structure. Instead, expect them to work even harder to compel new workers to join their outdated enterprises.

Through a $90 million-plus campaign of demonstrations, reportedly stage-managed by left-wing PR shop BerlinRosen, the SEIU and its comrades flooded the news cycle with stories of workplace injustice thereby creating a false sense of grassroots momentum for union-advantaging policy changes.

The SEIU then hired lobbyists to appeal to politicians (bought through campaign contributions) to codify those policies into law. At the same time, the union pressured regulators–who were appointed by those bought politicians–to make radical changes to basic American business law, enabling the union to conscript members on a mass scale. If the SEIU gets its way and unionizes McDonald’s alone, it stands to rake in $100 million per year.

Conscription is the name of the game for the desperate labor movement. The union-backed Workforce Democracy Act—a misnomer worthy of a Cold War-era “democratic republic”—would require all states to recognize forced dues contracts while repealing a 70-year-old ban on the “secondary boycott” in labor disputes, allowing unions to picket and intimidate any business which did not force union labor practices on its suppliers. Among the bill’s sponsors is Bernie Sanders, the prominent socialist Senator from Vermont.

Government worker unions are also turning to desperate measures. The United Teachers Los Angeles secured anti-charter-school concessions in its strike-ending agreement, while its national parent union, the American Federation of Teachers, doubled down on supporting controversial left-wing activism of the Women’s March. Government worker unions including AFSCME and the SEIU have created “dues skim” efforts to take money from assistance checks intended for in-home caregivers “working” for disabled family members.

Big Labor is an $8 billion annual business, and it will battle at all levels to preserve its privileges. As members quit and governments offer more choices to workers, expect the labor movement to become even more aggressive.