SEIU Takes The Fight For 15 To The Footsteps of Congress 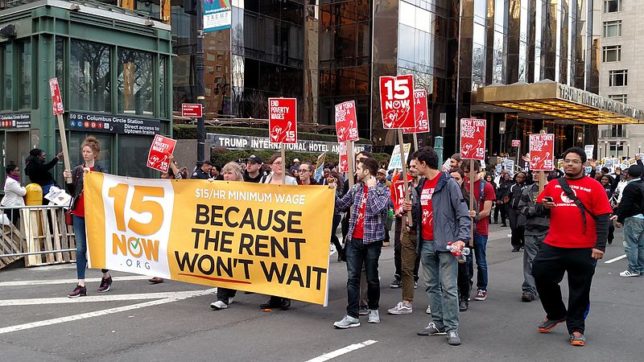 On Wednesday, Democrats and left-wing members of Congress announced their support for the Raise the Wage Act, a proposed law that would raise the federal minimum wage to $15 per hour, up from the current rate of $7.25.

Initially introduced in the 115th Congress (2017-2019), the bill never made much progress in the Republican-controlled House of Representatives. But with Rep. Nancy Pelosi (D-California) leading the Democrats’ majority in the House, the bill has brighter prospects: its cosponsor, Rep. Bobby Scott (D-Virginia), now serves as chair of the House Education and Labor Committee.

In the 116th Congress, the bill is expected to face a more successful outcome with the committee featuring longtime labor allies, such as Rep. Mark Pocan (D-Wisconsin)—sponsor of radical legislation to increase workforce unionization—and Rep. Pramila Jayapal (D- Washington), who served on the advisory committee that negotiated Seattle’s $15 minimum wage.

This legislation would be the culmination of the so-called “Fight for $15,” a campaign led by the Service Employees International Union, which has spent an estimated $90 million supporting left-leaning activists to pressure governments to raise their minimum wages to $15 per hour and to pressure fast-food establishments such as McDonald’s to unionize their workers by a somewhat misleading public “card check.”

(Under card-check, union organizers solicit employee signatures on cards which authorize union membership. The practice is controversial as employees may believe that they are petitioning for an election and can be unaware that the cards themselves are a direct path to unionization.)

It should not therefore be surprising that the SEIU donated $335,509 to members of the House Education and Labor Committee during the 2018 election cycle alone. Rep. Scott, the committee chair, has received over $45,000 in campaign contributions from the SEIU over the span of his congressional career. Other committee members, such as Reps. Suzanne Bonamici, Joe Courtney, and Frederica Wilson each received at least $20,000. Rep. Raul Grijalva (D-Nevada) received just over $55,000.

Except for Rep. David Trone (D-Maryland) and nonvoting Delegate Gregorio Kilili Sablan (D-Northern Mariana Islands), every Democrat on the committee has received campaign donations from the SEIU.

The $15 wage bill is only part of the SEIU’s plan. In November 2013, journalist Arun Gupta wrote in the far left, pro-union publication, In These Times, that the SEIU had a plan to pressure fast food establishments to unionize their workforces by eliminating the distinction between corporations and their franchises and pressuring corporations with litigation to require their franchises to accept unionization without management interference. In 2015, the National Labor Relations Board (at the time under a Democratic majority) took a step toward the SEIU’s desired outcome by expanding the level of interactions between franchisors and franchisees that triggered this “joint employer” liability.

This decision affects major fast food corporations that operate on a franchisor and franchisee basis. Under the new ruling, McDonald’s as a franchisor is held liable for all the labor issues that come from individual franchisees. This also incentivizes more lawsuits, since it wasn’t nearly as lucrative under the past ruling to sue the individual business owner.

The NLRB’s decision was in many ways a recognition by appointees of President Barack Obama of the importance of SEIU’s support for his two candidacies: In 2008, SEIU spent a self-declared $60 million to support Obama’s initial campaign, and in 2012 the union spent at least $70 million backing Democrats. The new Education and Labor Committee’s priorities, if left unchecked, promise to continue what President Obama started.