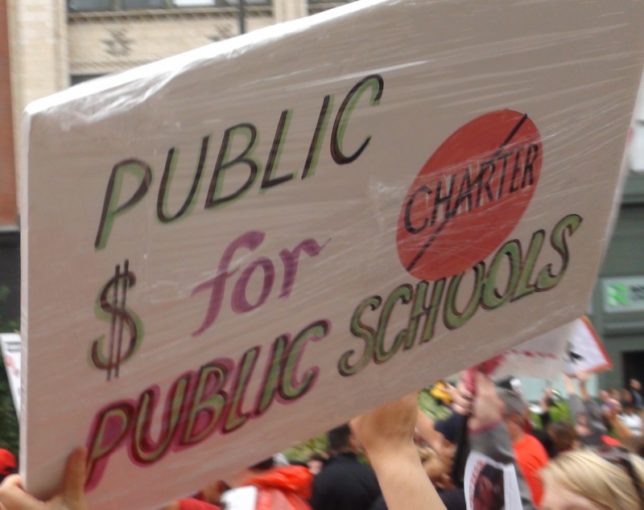 The agreement terms, which were approved by UTLA’s membership, calls for a 6 percent raise for teachers and an investment of over $400 million toward reducing class sizes and adding support staff for teachers. More importantly, the terms call for union input into charter “co-location”—the placement of charter schools in traditional public school buildings. (Charter schools are government-funded public schools which operate independently of the main public school system.)

In a charter school co-location, charter schools use otherwise empty classrooms in traditional public school buildings. In Los Angeles, co-locations have been a source of controversy between the Los Angeles Unified School District (LAUSD) and UTLA for several years. While teachers at conventional district schools are required to accept representation from UTLA (and until the Janus decision last year, were required to pay dues), most charter schools are non-union.  The new agreement terms between UTLA and LAUSD give the union more involvement in the selection process for co-location options.

Most importantly, in the UTLA summary of the strike negotiation terms, the following is mentioned:

The Board of Education will vote on a resolution calling on the state to establish a charter school cap and the creation of a Governor’s committee on charter schools at the next BOE meeting.

Twenty percent of students (and their parents) chose to attend charter schools because they are demonstrably superior to public schools, even if they share the same building.

While charter schools have certainly diverted public funds away from traditional public schools, this is not the source of UTLA’s problems.

UTLA took its first blow when their anti-charter school candidates for the LAUSD board were defeated in the 2017 school board election. In 2017, around $17 million was spent on the election race for three open school board seats for the Los Angeles Unified School District, making it one of the most expensive school board elections in U.S. history  Out of the $14.7 million spent by outside groups, much of it came from either UTLA or the California Charter Schools Association.

Next, UTLA took a major blow with the 2018 Janus Supreme Court decision, which overturned the ability of government sector unions, like UTLA, to demand non-union members pay fees to unions.

Topping things off, the LAUSD has vastly misallocated its resources over the past few years, which has resulted in more money tied up in educational bureaucracies rather than actually helping students learn.

According to a Reason Foundation analysis of the various financial statements and reports released by the LAUSD, student enrollment in the LAUSD declined by 9.3 percent from 2013-2017, while total salaries and benefits paid out by the school district increased by 22 percent. From 2014-2018, LA Unified schools cut back on the number of teachers they employed by 5 percent in response to declining enrollment rates, but simultaneously increased “other certified staff” (such as nurses, counselors, speech therapists, and school psychologists) by 26 percent, and increased K-12 administrators by 16 percent.

In other words, the LAUSD has increased the number of their support staff over the past four years, and the recent UTLA strike just secured hundreds of millions of dollars to spend on even more support staff—all while students flock to charter schools and the LAUSD cuts back on the number of teachers employed.