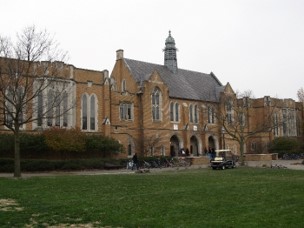 The Pulte Family Charitable Foundation recently made a pledge of $111 million to the University of Notre Dame. Credit: Ken Lund. License: https://bit.ly/374yPe8.
by Jeremy Lott

A Tale of Two Charities

The different ways the various Pultes are going about philanthropy appears to reflect differences of emphasis, not a rift. The large donation to Notre Dame, where several Pultes but not Bill went to college, departs from William’s general approach to charity during his lifetime. William tended to focus more on direct material assistance.

Beth Kanter, an expert in nonprofits and online fundraising, crystalized the difference between the two approaches while also praising both. “Anyone who is giving visibility to being generous, and is trying to create a ripple effect around generosity is fantastic. We want to see more of that. The flip side is, if you look at big donors, they try to change systems, versus giving money directly to individuals,” she told the Detroit Free Press.

William’s widow Karen Pulte insists that her late husband “wanted to do what he could to help address the world’s biggest problems, especially world peace and poverty.” In a press release, she said William “wanted more impact on a larger scale,” and expressed great confidence that the expected scale of this and future donations is truly, staggeringly enormous: “Together, [the Pulte Family Charitable Foundation and Notre Dame] will leverage our resources to finally put an end to global poverty once and for all.”

In addition to funding new initiatives, the Pulte family is greatly concerned about boosting William’s posthumous reputation. The foundation website even features a prayer that he apparently authored and recited:

Dear God, thank you for all creation. In the spirit of Jesus of Nazareth and all teachers of peace who inspire the many faith traditions, help me, and all the people of the world, learn how to replace hate, war, oppression and division with love, peace, freedom, and reconciliation. Help me to embody Your love in my relationships with my family and friends, strangers—even my enemies. I commit myself to this sacred task throughout my life. So Let it be.

Bill Pulte has not spoken negatively of the family foundation’s donations. He has linked to news of them and appears proud of his family’s efforts. Yet his own philanthropic approach and ambition are quite different. You might call them grandiose but in a different way.

Disney had struck a deal to buy Twitter to promote its new streaming service Disney+, but CEO Bob Iger pulled his entertainment company out of the deal at the last moment, because “the nastiness” on display there “is extraordinary.” Asked by Bloomberg Businessweek if he’s still happy with that decision, Iger replied, “every day.” Twitter is famous for the politicization of practically everything and for the “outrage mobs” that accompany the partisan vitriol.

Rather than try to tiptoe around Twitter’s toxic dynamic, Pulte waved a red flag right in the bull’s face. In July, Pulte tagged the most controversial account on Twitter, the one belonging to President Donald Trump, and offered to donate $30,000 to a veteran’s cause if the president would retweet the message to his followers. President Trump promptly did, along with the message “THANK YOU BILL!”

Anything involving President Trump invites passionate responses—from attaboys to criticism to whisper campaigns to threats—and Pulte’s donation for promotion was no exception. Pulte complained about attempts to dox him and publicly announced that he’d informed the FBI. But he hasn’t let that stop him from boasting about regular contact with the president.

In the next installment of Twitter Philanthropy, learn about Pulte’s larger vision of what Twitter philanthropy could become.