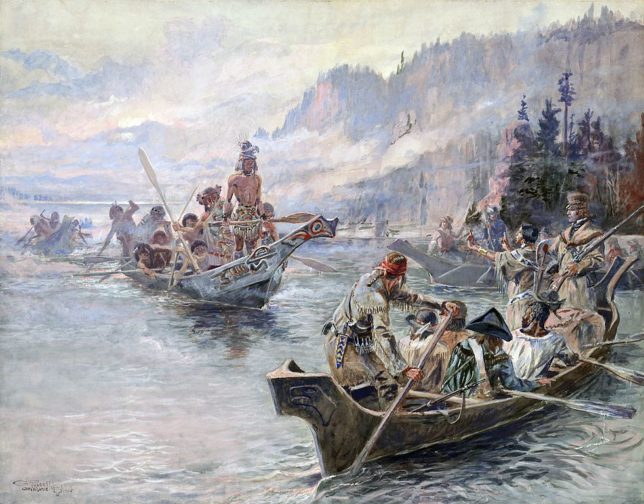 Today—September 23, 2020—marks the 214th anniversary of the Lewis and Clark Expedition’s return to St. Louis. Meriwether Lewis and William Clark had spent more than two years traversing the continent. In light of their accomplishment, it’s worth taking a look at the critical role that private philanthropy played in the federal government’s efforts at westward exploration.

Conservatives are often vexed by the blending of public- and private-sector interests, rightly concerned about one improperly influencing the other. This extends to the nonprofit sector: The Capital Research Center has written extensively on problems that can arise from federally funded charities. There are also alarming examples of moneyed influence flowing in the opposite direction, from philanthropy to government.

That said, American civil society has a tradition dating back to the Founding Fathers of aiding government undertakings. The Lewis and Clark Expedition was one such—wildly successful—undertaking. Properly constrained, public-private collaboration is a tradition worth celebrating for its positive reflections on the American civic character.

The Lewis and Clark Expedition was a government operation, carried out primarily by U.S. Army personnel. Congress funded it with a $2,500 appropriation and authorized Lewis to write further drafts against the government. And write drafts he did: According to Stephen E. Ambrose in Undaunted Courage, he wrote about 2,000 totaling $38,722.25.

Even so, the government couldn’t provide the expedition with everything it would need to succeed. In particular, President Thomas Jefferson recognized that some of its central objectives would largely depend on specialized knowledge, training, and instrumentation—things the federal government didn’t exactly have at its fingertips to offer Lewis in 1803. So Jefferson began personally enlisting private-sector contacts who could provide this aid. And he was clear that the government would not be paying for it.

The response was enthusiastic, and Lewis benefited from weeks of private tutoring and assistance from some of the country’s preeminent experts in mathematics, medicine, anatomy, botany, surveying, and more. They loaned him books, helped him acquire and prepare scientific instrumentation, and generally did whatever they could to prepare Lewis for success.

These men, most of whom lived in Philadelphia, were members of the American Philosophical Society, founded in 1743 by Benjamin Franklin. It still exists today as a 501(c)(3) nonprofit, making it the oldest “learned society” in the United States. That Jefferson chose to reach out to its membership was not coincidental; he was the society’s president in addition to serving as the president of the United States. Jefferson saw civic institutions like the Society as “the proper means of supporting innovation, experimentation, and industry” and strongly favored “its mode of operating in the interests of the nation but independent of federal aid.”

And the American Philosophical Society had independently supported westward exploration before. Ten years earlier in 1793 the society had raised $1,569 from private subscribers—including Jefferson, George Washington, Alexander Hamilton, John Adams, and James Madison—for a westward expedition, which received no federal funding. Due in no small measure to international political machinations related to the Citizen Genet Affair, that venture did not get further than Kentucky.

Lewis, though, was destined to succeed. In recognition for the critical assistance that the American Philosophical Society provided, it would later become the repository of many specimens from the expedition—including the original journals—which it houses to this day. Indeed, as related in Undaunted Courage, the preparation of the journals for publication was itself an act of private charity. After Lewis’s untimely death in 1809, 26-year-old Nicholas Biddle—who later became a member of the society—spent more than two years editing them full-time, at no charge.

Lessons and Implications for Today

Things are rather different in 2020, but if anything, questions about the proper interplay between the private and public sectors are far more consequential in modern times. So what lessons about government and civil society can be gleaned from the Lewis and Clark Expedition?

The first is axiomatic to conservatives: Private charity is very often better positioned than government to provide a particular service effectively, and it will frequently take the initiative when government does not or cannot. This is true even in areas of decidedly governmental concern: Recent instances of successful bottom-up charitable initiatives in prisoner reentry and veterans’ trauma are but two examples.

Second, philanthropic assistance should be genuinely charitable in its objectives. Jefferson’s government did not hire the American Philosophical Society or otherwise pay its members for the considerable aid rendered. Far from seeking to financially profit from the expedition, the compensation these men desired lay in the expedition’s successful completion and the wealth of knowledge it would provide to them and the entire world. This starkly contrast with those contemporary charities that pay their leadership seven-figure salaries almost entirely on the back of federal programs.

Finally, any private involvement in government should conspicuously eschew political expediency. While the expedition was as thoroughly politicized as anything that passes through Congress and the American Philosophical Society had a “decidedly Jeffersonian cast” in an era of great partisan polarization, the assistance its members rendered was not part of some political scheme. They sought to assist government with an undertaking that they supported, not harness its power for their own partisan ends. Compare that with Big Philanthropy’s recent efforts to place “special assistant attorneys general” in state government offices in order to further openly political agendas.

A Bedrock of Civil Society

In an era when those on the Left advance policies that point to more government as the answer to seemingly every question, it’s worth remembering that American government has rested on a bedrock of private civil society since the very beginning. It’s a historical relationship recently detailed in Elisabeth S. Clemens’ new book Civic Gifts. And as the Lewis and Clark Expedition demonstrates, government’s most successful enterprises are built on that bedrock.