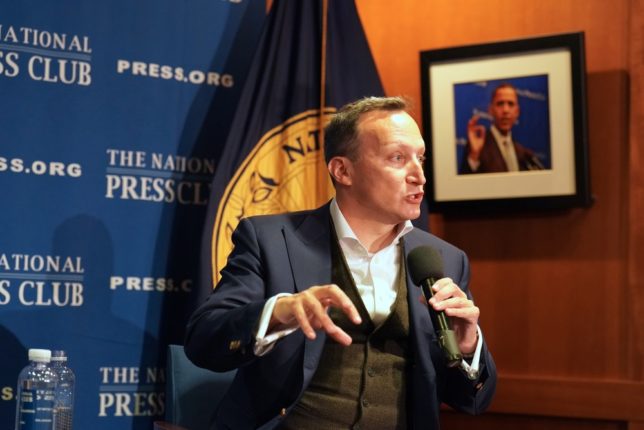 More red flags appear the deeper we dig. It’s no secret that ERIC was “initiated as a project of the Pew Charitable Trusts,” as one liberal group notes. Less well known are the group’s ties to partisan operative David Becker and billionaire George Soros.

Becker is a former Justice Department trial attorney who earned a reputation as a “hardcore leftist” who “couldn’t stand conservatives,” as the head of the Justice Department’s Civil Rights division put it. In 2005, Becker joined the “progressive advocacy” group People for the American Way (PFAW) as a lobbyist specializing in elections—though the group is curiously absent from his LinkedIn resumé. PFAW supports the usual raft of far-left election “reforms,” including the Democrats’ For the People Act (H.R. 1).

When Becker joined the Pew Center on the States in 2008 as director of election initiatives he focused on implementing new voter registration “reforms” in the states. (Notably, he outright dismisses the possibility of voter fraud arising from mass registration.) Under his leadership, ERIC was born four years later.

Funding for the project appears to have originated with Soros’s Foundation to Promote Open Society, which funneled two grants to Pew in 2011 totaling $725,000. The first was “to support the Pew Center on the States’ voter registration modernization initiative,” while the second funded “renewed project support to the Pew Charitable Trusts’ Elections Initiatives to modernize voter registration systems and to provide new project support to elections initiatives to expand the scope and scale of the voter information project” (emphasis added).

Independent journalists have also uncovered references to Pew’s voter registration activities in a leaked copy of the Open Society Foundations’ 2011–12 budget. That document lists Pew Center on the States as a “lead grantee” alongside the Brennan Center and Advancement Project, which oppose voter ID laws and support the Left’s array of election “reforms” including Election Day registration.

Interestingly, Becker (then representing Pew) used the commendation of another Soros-funded group, the Center for Democracy and Technology (CDT), in his 2013 testimony urging New Mexico to join ERIC. Besides Soros, CDT is funded by the Ford and MacArthur Foundations to push net neutrality and similar regulations.

An archived copy of ERIC’s website from late 2019 shows another Center for Democracy and Technology senior staffer on the former’s advisory board, Joseph Lorenzo Hall, who’s since been scrubbed from the site. ERIC board member Stephen Trout, a former Oregon elections director, now runs government partnerships for CDT’s Voting Works, which advises states on implementing voter verification and vote-by-mail systems.

Becker led ERIC until 2016, when he left to start a new “reform” group, the Center for the Election Innovation and Research (CEIR), though he remains on ERIC’s board. Although it claims to be nonpartisan, CEIR is anything but. In October 2021, Becker represented CEIR in his testimony before Congress where he dismissed election integrity concerns as “a scam to keep them [Republican voters] angry, divided, and donating” that benefits Russia, China, and other hostile governments trying “to delegitimize democracy.” He added:

They have been fed a constant diet of lies telling them that millions of their fellow citizens, half of them members of their own party, engaged in a massive conspiracy to deliver the election to the current president, and that none of the millions of conspirators are talking. This sickness is leading to laws in the states that make elections less secure, leading to threats against public servants who run elections.

In 2020, CEIR received nearly $70 million from Mark Zuckerberg to fund Covid-19 “relief grants,” money it paid out to secretaries of state in key battleground states for “urgent voter education assistance.”

CEIR’s true goal was promoting mail-in ballots, early voting, and government-run registration campaigns ahead of the 2020 election. In Maryland, CEIR’s “Zuck bucks” accounted for roughly one-third of the state’s $2 million campaign to register and turn out likely Democratic voters in Baltimore and the counties bordering Washington, D.C.

Heather Honey, founder of the watchdog group Verity Vote, has discovered that ERIC maintains a data-sharing agreement with CEIR, which CEIR allegedly uses to generate lists of eligible voters to target. Coupled with evidence that ERIC membership agreement “prevents member states from disclosing any information associated with ERIC” or related voter registration activities, Honey asserts there’s a “veil of secrecy around [its] operations.” If true, that would violate the National Voter Registration Act of 1993, which requires states make these activities transparent.

CEIR’s Zuck bucks strategy mirrored that of another Zuckerberg donee in 2020: the Center for Tech and Civic Life (CTCL), another “good government” group, which dumped roughly $350 million into thousands of local elections offices in a thinly veiled effort to privatize the election in these key jurisdictions. CTCL’s Zuck bucks favored Democratic vote-rich cities in battleground states and heavily boosted Biden turnout.

Take Wisconsin, the first state targeted by Zuck bucks, where 84 percent of the $10.1 million CTCL paid out went to the state’s five biggest cities, all of which broke for Biden. Per capita, CTCL grants in Biden counties averaged $3.75 per person and just $0.55 in Trump counties. Those five cities used CTCL grants to fuel the so-called Wisconsin Safe Voting Plan, which revolved around drop boxes, mail-in ballots and processing equipment, and last-minute changes to early voting laws. In all likelihood, without Zuck bucks the scheme would have proven impossible to implement.

In July 2022, the Wisconsin Supreme Court ruled drop boxes unconstitutional and 24 states have since banned or restricted Zuck bucks in future elections. Six Democratic governors have vetoed such measures. Wisconsin Gov. Tony Evers (D.) vetoed them twice. So it ought to concern conservatives that an ERIC representative appeared in at least one CTCL presentation for election officials on “maintaining voter lists” to discuss her organization’s “plans to expand the ‘eligible but unregistered’ report.” Add to that CEIR’s IRS disclosures between 2017 and 2020, which report engaging in “limited direct lobbying of state government officials to encourage . . . membership in ERIC.”

What do partisan get-out-the-vote groups like CEIR and CTCL see in ERIC?

Louisiana is certainly concerned. In January, Secretary of State Kyle Ardoin announced that the Bayou State will suspend participation in ERIC “effective immediately” after it became clear that the organization is about much more than purging voter rolls. Louisiana joined the compact in 2014, making it one of the first states to join and the only state to leave.

When Louisiana joined ERIC under my predecessor, we did so under the impression that it would enhance the accuracy of our voter rolls and strengthen Louisiana’s election integrity. After reading about these allegations and speaking with election attorneys and experts, I have determined that it may no longer be in Louisiana’s best interests to participate in this organization. It is vital that any legitimate allegation of voter fraud or possible misuse of our voters’ personal information is investigated. My job is to ensure that the data voters entrust to my office is protected. I look forward to ERIC’s swift response to these allegations.

In the next installment, ERIC is quite popular with the Left.