Since 2004, major liberal donors, foundations, and special interest groups have met regularly at Democracy Alliance conferences to develop and coordinate the “activities of a permanent ‘left[-wing] infrastructure,’” to quote the New York Times. The alliance doesn’t dole out cash itself. Instead, its members agree to dispense high-dollar “investments” in activist groups that the alliance certifies as essential to Democratic Party victories in upcoming elections. In practice, this usually means voter registration and get-out-the-vote groups targeting the “New American Majority,” a phrase the alliance helpfully defines as “people of color, LGBTQ individuals, women, and millennials who are driving progressive social change.”

Keep in mind that tax-exempt nonprofits and foundations are barred from engaging in partisan voter registration drives—that includes having “the effect of favoring a candidate or group of candidates” [emphasis added]. Yet it’s no secret that “New American Majority” is synonymous with “likely Democratic voters,” flagrantly violating IRS prohibitions on tax-exempt electioneering.

For example, Harvard University published a report in 2019 celebrating the “voters of color” who “flipped Congress” in the 2018 midterm elections and are “transforming the political landscape across America,” labeling these voters key to “Democrats’ winning strategy.” It’s reports like those that inform the Democracy Alliance’s grantmaking strategy.

So it’s no surprise that in shortly after the “shocking and disturbing” outcome of the 2016 presidential election, the alliance set about creating a 2020 Vision Investment Portfolio to “outpace the Right” with “sustained investment in progressive infrastructure at the national and state levels.” The alliance formed 15 pooled funds with names like “New American Majority Fund” and “Latino Engagement Action Fund” to boost Democratic turnout in the 2018 and 2020 elections, particularly in battleground states such as North Carolina and Pennsylvania. 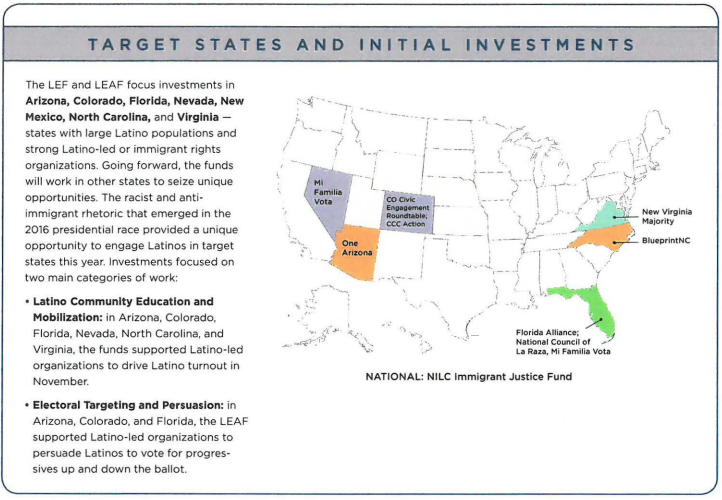 The details of Omidyar’s involvement in the Democracy Alliance are scarce, but multiple threads tie his nonprofits to this shadowy network.

For instance, in 2017 the Democracy Fund granted $280,000 to the Arabella-run Hopewell Fund as “program support” for the Center for Election Innovation and Research (CEIR). In its own disclosure for that year, Hopewell shuffled $281,952 to CEIR—a clear example of a foundation using a pass-through to fund political work. In fact, CEIR gained notoriety only after Mark Zuckerberg gave it $70 million to fund COVID-19 “relief” grants to various secretaries of state in the 2020 election, funds that—in Maryland’s case—helped turn out likely Democratic voters in Baltimore and the counties neighboring Washington, DC.

It’s the same story with grants from the Omidyar Network Fund and Democracy Fund to Arabella-run nonprofits in recent years:

In the next installment, Omidyar’s nonprofits have bankrolled numerous left-wing groups.