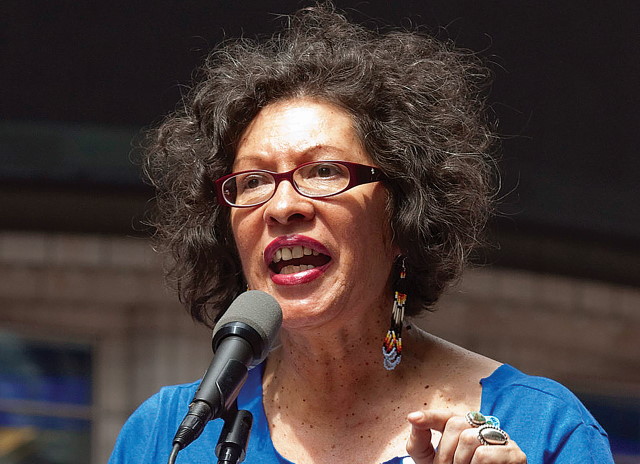 At the national level, several Native American organizations stand out.

NOA is run by former national vice-chair of the Communist Party USA Judith LeBlanc. It is fiscally sponsored by the left-wing Alliance for a Just Society, a member of the left-wing Movement Voter Project’s Native Vote Fund, and heavily funded by other prominent left-of-center “dark money” organizations such as the Tides Nexus and the NoVo Foundation.

In 2020, the Alliance for a Just Society gave $21,000 to Native Organizers Alliance to support various voter engagement activities across nine states, including educating and mobilizing the native vote for the 2020 election with an outreach of over 100,000 participants.

The left-of-center Alliance for a Just Society reported a $842,921 program expense in 2020 in support of NOA, which they say heavily influenced the historic Native American turnout and helped pay for programmatic expenses. Its outreach efforts focus on anti-pipeline activism and calls for a “truth and reconciliation process” for the reevaluation of how the U.S. government has treated Native Americans.”

In Arizona, NOA expressed concern about the Ninth Circuit upholding Arizona ban on ballot collection. The organization worried the decision would impact tribal ballots cast in an incorrect precinct. In Nevada, NOA brought lawsuits to expand early voting as the campaign season dragged on and vote by mail became a reality across the nation.

But NOA’s impact extended beyond lawsuits. It influenced the 2020 election cycle by co-sponsoring events with other influential left-of-center Native American activist organizations including the Frank LeMere Presidential Forum with the National Congress of American Indians (NCAI), Four Directions, and Native American Rights Fund (NARF). While Van Jones may have mentioned NOA by name during his election coverage, NCAI may have had the strongest direct impact on voting, electioneering, and the 2020 presidential election in favor of Democratic candidates across the board.

National Congress of American Indians. NCAI is the largest and oldest 501(c)(4) nonprofit organization that advocates on American Indian and Alaska Native issues. NCAI’s 501(c)(3) arm is the NCAI Fund.

In 2019, NCAI Fund received over $6 million in contributions and grants, of which over $2.3 million came from federal government grants. The fund reported expenses of $1,674,927, which included native vote and Census outreach, which raises the question of whether federal funds were used to support some of NCAI’s efforts, including its drive to increase turnout and run the Native Vote campaign.

NCAI partnered with other organizations included NARF and Four Directions for a 2020 presidential forum, which included leading Democratic Party candidates Elizabeth Warren, Bernie Sanders, and Amy Klobuchar and a Facebook livestream with NOA’s Judith LeBlanc. But its most influential program in the 2020 election and beyond is undoubtedly Native Vote.

In the 2020 election cycle, NCAI distributed “mini grants” to tribal organizations and state Native Vote chapters to support projects prior to the election. Grants were limited to $2,000 per tribal organization and listed “ordering Native Vote merchandise for tribal nations/communities” as one of the possible uses of the funds. On the ground, more than 100 Native Vote volunteers fanned out across Arizona on Election Day to deal with issues such as early voting and provisional voting.

Native Vote’s “Every Native Vote Counts” t-shirts were ubiquitous across Indian Country in social media posts and election photos, and this grant program likely made that possible. Native American activist organizations that may have received grant funding told individuals to “go vote and swing by and get an awesome shirt” while posting a photo of NCAI’s Native Vote shirts on its Facebook page. Nevada Native Vote Project (NNVP) representatives in the Lovelock Paiute Tribe called these shirts “goodies and incentives for voting” in a Facebook video post.

Prior to Election Day, NCAI and Native Vote held events and handing out voter kits including t-shirts, masks, and gloves in the weeks before the election. At a Native Vote rally prior to the election, one speaker said American systems “have a foundation in genocide and slavery.” The group distributed a 2020 Voter Action Kit, which explained Native Vote and suggested actions for Native Vote coordinators. It also instructed coordinators not to endorse candidates while representing Native Vote.

As is often the case, the lines between representing a nonprofit and electioneering were blurred, as demonstrated at the Reno-Sparks Indian Colony (RSIC) in Nevada. RSIC’s information officer also allegedly distributed “Every Native Vote Counts” t-shirts to voters inside the polls on Election Day, promoted Visa gift card raffles for voters, filmed videos on RSIC’s Facebook page promoting high native-vote turnout, and wore a Biden-Harris campaign mask during a Biden-Harris campaign bus stop at the colony.

Since the 2020 election, NCAI’s organizing work has continued, praising election officials for making sure “every vote counts” on November 4. NCAI hosted an event with far-left UnidosUS (formerly known as the National Council of La Raza) to discuss Arizona voter turnout in Latino and American Indian Electorates and released a post-election report claiming Native American voters broke by a margin of 60-35 in favor of Joe Biden over Donald Trump. Of particular note for the next election cycle, Native Vote shifted its activities to focus on Georgia during the 2021 U.S. Senate runoff elections, despite the state’s relatively low Native American population.

Four Directions Native Vote. The New York Times identified Four Directions as an important driver of increasing Native American votes for Joe Biden in swing states such as Arizona after the election, and for good reason. Four Directions is a left-of-center organization that used different tactics to turn out as many of the 100,000 voting-age Native Americans as possible in Arizona. Their efforts were instrumental to Biden receiving more than 80 percent of the vote on Navajo tribal lands, where Biden received 13,500 more votes than Hillary Clinton did in 2016.

As a member of NARF’s Native American Voter Rights Coalition, Four Directions joined NCAI, California Native Vote, the American Civil Liberties Union (ACLU), and others to develop a comprehensive litigation strategy for the 2016 election. The group has been active on election issues ever since, including receiving over $100,000 from NARF in 2018 for “poll monitoring” and $10,000 from the Tides Foundation for “equality and human rights.” It worked alongside NOA director Judith LeBlanc on GOTV efforts at the Standing Rock Sioux Tribe headquarters in North Dakota.

Since the November election, Four Directions’ network and intentions of growing have become clear. In a conversation with then-Senate candidate Raphael Warnock (D-GA), Four Directions director O.J. Seamans said the group had begun knocking on doors in Atlanta to identify Native Americans voters in Atlanta (despite Georgia’s small Native American population) and acknowledged it was active in Arizona, Nevada, Wisconsin, and Minnesota during the 2020 election cycle. Four Directions even ran a Georgia-specific fundraising call on the ActBlue platform to support operations for the runoff election.

Since Sen. Warnock and Sen. Jon Ossoff (D-GA) won their elections, Four Directions has continued to grow. In June 2021, the group announced a new agreement to join with Stacey Abrams’s voter registration organization Fair Count to strengthen outreach to Native Americans in Georgia and across the nation through civic programs, increased ballot box access, and communications in hard-to-count areas. This new relationship, and the money that comes with it, will make Four Directions Native Vote one group to monitor in upcoming election cycles.

In the next installment, look at state and regional organizations that likely influenced the 2020 elections.