The Left-Progressive Machine in Indian Country: Beyond 2020 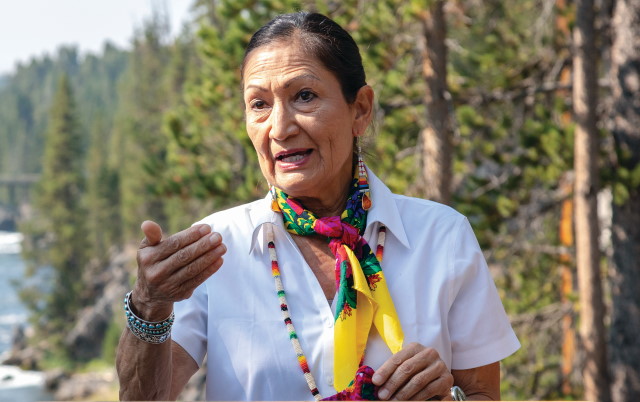 Lisa Murkowski supported the confirmation of Deb Haaland to be the secretary of the interior in a political move that could be seen as a ploy to weaken Alaska Native opposition to her candidacy. Credit: U.S. Department of the Interior. Public Domain.
by Ike Clayton

As the IRS begins to release updated nonprofit reporting documents from the 2020 reporting cycle that were delayed by the COVID-19 pandemic, the direct financial impact and the full extent to which several of these left-aligned nonprofit organizations and groups influenced the 2020 election cycle across the nation will become more evident.

The Democratic Party’s electoral victories have expanded the influence of several Native American foundations where they operate.

Immediately following the 2020 presidential election, left-aligned Four Directions began work to support the campaigns of Democratic Senate candidates Jon Ossoff and Raphael Warnock in Georgia. As a part of a different discussion prior to the Georgia Senate runoff election, then-Rep. Haaland encouraged viewers of the Four Directions feed to “do the same thing they did in Arizona this past November” because Biden won Arizona and Wisconsin with the help of the Native American Vote.

In June 2021, Four Directions solidified the relationships it made with left-aligned activist groups during the 2020 Georgia Senate runoff election, announcing a new partnership with Fair Count, a census group founded by failed Georgia gubernatorial candidate Stacey Abrams, to strengthen voter outreach to Native Americans in Georgia and across the country.

After the Democrats won both Senate races and gained functional control of the 50-50 Senate, several left-of-center activist groups shifted their focus yet again, from election activism and organizing to pressuring the Biden Administration to nominate and appoint then-Rep. Debra Haaland (D-NM) as the first Native American to serve as U.S. secretary of the interior. These efforts were highly effective, and Haaland was confirmed by the Senate by a 51-40 vote. Native American activists have been rewarded so far during Haaland’s term, most notably by the cancellation of the Keystone XL pipeline, transfer of 18,000 acres of federal lands from the Department of Interior to tribal authorities, and the establishment of the Missing and Murdered Unit at DOI to search for missing or murdered American Indians and Alaska Natives.

Left-wing Native American nonprofits and organizations are working to expand their influence.

Redistricting. As this analysis shows, one organizing pillar of Native American–focused nonprofits and organizations was the 2020 U.S. Census. At the top level, these groups were highly organized to ensure an accurate count of their tribes for increasing federal funding opportunities, ensure accurate congressional apportionment and state-level representation, and prepare organizing networks for the 2020 presidential election. Several state-level nonprofits involved in U.S. Census activism are working hard to influence the redistricting discussion.

NARF has released a guidebook for how tribal citizens can influence redistricting in Indian Country and state-specific redistricting guides for New Mexico, Montana, Arizona, North Dakota, and South Dakota. Left-of-center activist groups including NCAI, Western Native Voice, and New Mexico Native Vote have hosted webinars or distributed literature about influencing the redistricting process in their respective states. Wisconsin Native Vote’s Democracy for All initiative includes redistricting as one of their three main projects for the future. California Native Vote is a part of left-aligned Advancement Project’s Integrated Voter Engagement Redistricting Alliance, which aims to influence California Citizens Redistricting Commission.

2021 California Gubernatorial Recall Election. Keen observers should not limit their analysis and investigation of these special interest groups to Indian Country, nor should they look directly to the 2022 midterm elections. California is home to the largest number of active Native Americans of any state in the union, and CANV is one of the largest Native American GOTV and activist groups in the country. CANV was one of only two organizations contracted by the State of California to conduct outreach for the 2020 Census, and this group will likely be highly involved in recruiting volunteers, conducting GOTV efforts, turning out Native American voters, and helping members of this highly Democratic constituency complete mail-in ballots in the recall election of Gov. Newsom this September.

2022 Election Cycle. As the 2022 election cycle approaches, the Native American vote could affect Senate and gubernatorial elections in several states where the Native American population is proportionally highest. Native American left-of-center nonprofits have been operating for several cycles and can target that demographic to drive Democrats to victory, particularly in Arizona, Nevada, and Alaska.

Election observers and fraud watchers should carefully follow how different nonprofit organizations and traditionally left-of-center activist groups such as the Anchorage-based Native Peoples Action behave in the 2022 Alaska Senate election cycle. Alaska has the most voting-age Native Americans per capita in the nation and Sen. Lisa Murkowski (R) is seeking re-election, but unlike other Republican officeholders, her 2010 Senate write-in victory is credited to support from Native American tribes. Murkowski supported the confirmation of Deb Haaland to be the secretary of the interior in a political move that could be seen as a ploy to weaken Alaska Native opposition to her candidacy.

With the control of the U.S. Senate hinging on the 2022 midterm elections, there will be ample opportunities to seek out fraud and monitor close races outside of Alaska. The contentious re-election campaigns of Sens. Mark Kelly (D-AZ), Catherine Cortez Masto (D-NV), the potential re-election campaign of Ron Johnson (R-WI), and the open seat caused by a Republican retirement in North Carolina—states with proportionally high Native American populations—are in the national spotlight for both activist groups and commentators alike. Groups such as the Rural Utah Project and Rural Arizona Project should be carefully monitored for their activities in Arizona in what looks like it will be a close race. Gubernatorial races in Arizona, Wisconsin, Michigan, and Nevada may also see significant spending and organizing efforts from left-aligned nonprofits on Indian reservations and other tribal lands to push these marginal races into Democratic hands.

Left-aligned interest groups and nonprofits will likely use the knowledge and experience they gained in mail-in voting, absentee voting, and preexisting election architecture during the 2020 presidential election to test new GOTV strategies in the 2022 midterm elections and 2024 presidential election. Once the IRS updates its 2020-cycle postings in the coming months we will have a clearer idea of where the money went in the 2020 election and where it will likely go in the next election cycle.