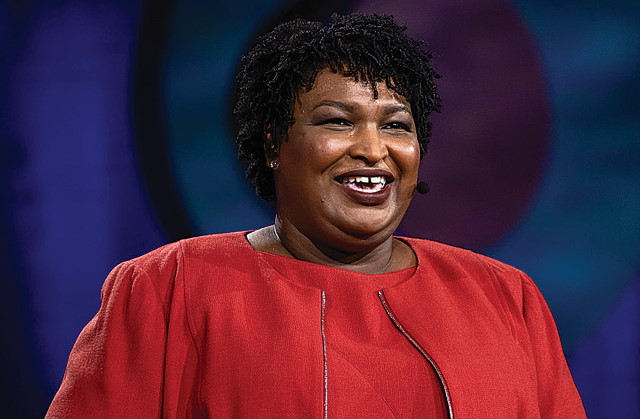 In June 2021, Four Directions solidified the relationships it made with left-aligned activist groups during the 2020 Georgia Senate runoff election, announcing a new partnership with Fair Count, a census group founded by failed Georgia gubernatorial candidate Stacey Abrams, to strengthen voter outreach to Native Americans in Georgia and across the country. Credit: TED Conference. License: https://bit.ly/3D8Nk1C.
by Ike Clayton

In the 2020 election, the Native American vote may have had the greatest impact in Arizona.

Navajo Nation. American Indians make up 6 percent of the vote in Arizona, a state that Joe Biden won by fewer than 12,000 votes. Predictably left-of-center nonprofit work was extremely focused on delivering the state for Biden. While the Democratic Party fought to weaken Arizona’s voting rules by expanding mail-in ballot timing, allowing ballot harvesting, and allowing Native Americans to vote out of precinct, nonprofit groups were working hard to register voters and galvanize turnout.

Navajo Nation, which is concentrated in northeast Arizona, contains approximately 67,000 eligible voters and broke for Joe Biden between 60 and 90 percent based on precinct-level data. They increased their turnout by 116 percent in 2020 due to the work of VoteAmerica, Four Directions, and the Rural Utah Project (RUP). In a Time piece about different groups that propelled the Biden campaign to victory, Navajo Nation members were seen wearing the ubiquitous Native Vote t-shirts and jackets from RUP.

RUP is a 501(c)(4) that works across state lines and focuses on voter engagement with the Navajo Nation in Utah and Arizona. Both the 501(c)(4) and the group’s 501(c)(3), Rural Utah Project Education Fund, route donations through left-aligned ActBlue. RUP has previously received six-figure donations from the far-left Southern Utah Wilderness Alliance.

RUP hired 12 organizers, who distributed plastic bags with voting information to voters in door-to-door campaigning, worked with Google to create “plus codes” to serve as mailing addresses for the reservation so more Navajo could participate in the state’s vote-by-mail system, and registered over 4,000 voters in Arizona.

RUP and RAP’s efforts paid off for the Biden campaign, as the historic Navajo Nation turnout may have been the difference in Arizona. Tribes in other parts of Arizona also came out strong for Biden, with some precincts on Tohono O’odham Nation, which opposed the construction of the border wall, delivering 98 percent of their votes for Biden.

Native Organizers Alliance and the left-of-center Inter Tribal Council of Arizona (ITCA) were also involved with increasing turnout on Navajo Nation lands. ITCA is one of the groups Van Jones labeled as responsible for Biden’s election victory, and they were deeply involved in the 2020 election.

ITCA reached out to over 50,000 voters through phone and text in addition to the organization’s 200,000 Facebook followers. Unlike other organizations, ITCA administers federal, state, and private grants in Native American communities. ITCA is directly linked to the national Native Vote infrastructure. ITCA is listed as project coordinator for NCAI’s Native Vote efforts in Arizona and received a $100,000 grant from the New Venture Fund 2019 as a part of the 2020 Census Project, which labeled Arizona as a “priority state.”

During the 2020 election cycle, ITCA partnered with other left-of-center organizations including All Voting is Local, Election Arizona, One Arizona, and left-aligned immigration advocacy organizations to advocate for expanded mail-in voting and higher Native American turnout.

Native American organizations were quite active in Nevada and in several instances appear to have violated election laws.

Nevada Native Vote Project (NNVP) is the Nevada affiliate of NCAI’s Native Vote project focused on the 27 tribes and colonies across Nevada and supported by NOA.  NNVP worked with All Voting is Local to distribute voter information, organize voter registration drives, and turnout events with the Democratic Party. NNVP is also known for potentially illegal and fraudulent behavior on Election Day.

In what may have been isolated incidents at various precincts on different Indian colonies and reservations, NNVP allegedly gave incentives such as t-shirts, gift cards, and raffle tickets in exchange for voting. NNVP promoted raffles, including gift card raffles for voters, on several different colonies and reservations across the state. One post on Election Day went as far as showing an image of an exchange of a ballot for a gas card with the caption, “McDermitt and Owyhee voters dropping off their ballots and picking up their gas cards!” The Nevada Indian Commission—a state agency—even shared posts from NVNP promoting their election gift card raffles.

Inter-Tribal Council of Nevada. Similar to the ITCA, the Inter-Tribal Council of Nevada (ITCN) is an organization which seeks to represent the tribal nations and also conducted Census activities across Nevada. ITCN worked in conjunction with Four Directions Nevada, NARF, NOA, and NCAI to host a Native American Presidential Forum, which included GOTV training from Four Directions.

ITCN promoted free raffles for adult voters for $250, $100, and $25 Visa gift cards, limited to tribal members, residents, and employees with an “I Voted” sticker or a ballot completion to Reno-Sparks Indian Colony leadership and allowed members of the Bernie Sanders campaign to attend Inter-Tribal Council meetings.

In an interview with Four Directions following the 2020 election, then-Rep. Haaland said President-elect Biden won Arizona and Wisconsin with the help of the Native Vote. Wisconsin Native Vote (WNV), a voter turnout initiative of Wisconsin Conservation Voices, was one of the driving factors for the vote change, spending over $80,000 in advertisements that included 12,900 mailers to voters across Wisconsin. Originally founded in 2011 to oppose an open-pit mine project, WNV was active the 2018 election cycle, contacting over 80,000 voters, knocking on thousands of doors, and pushing turnout levels to over 80 percent across Red Cliff, Bad River, Menominee, and Lac du Flambeau nations.

WNV’s organizing work led to large turnout increases in the 2020 cycle, with increases as high as 28 percent in Red Cliff, 24 percent in Menominee, and 18 percent in Mole Lake. WNV’s Democracy for All initiative targeted specific reservations to drive turnout and claims it worked by expanding early voting in Green Bay, installing absentee ballot drop boxes in Eau Claire, having absentee ballot mailers sent to all voters, and having the Wisconsin Department of Motor Vehicles set up satellite offices.

WNV has deep ties to the Biden White House and the Biden Administration despite its claimed nonpartisan status. Matthew Dannenberg left WNV to work as a field director for the Biden-Harris campaign as Wisconsin coalitions director and turned this experience into a brief stint as a senior associate director of the Office of Presidential Personnel at the White House, where he staffed positions related to the Environmental Protection Agency and Departments of Interior and Energy until he moved to the Department of Energy to be deputy chief of staff for the office of energy efficiency and renewable energy in May 2021.

California is home to the largest number of active Native Americans in the U.S., and California Native Vote (CANV) is one of the largest Native American activist groups in the nation, representing the 109 federally recognized tribes in 50 counties. CANV works directly with Native American Rights Coalition and other left-of-center Native American advocacy organizations in the state, gaining distinction as one of only two organizations contracted by the State of California to conduct outreach for the 2020 Census, receiving a funding allocation of $499,000 for Census purposes. Despite its nonprofit status, the group published a 2020 voter guide for general election ballot propositions.

Given the organization’s penchant for receiving large six-figure donations from left-wing foundations including $630,000 from the California Endowment in 2018, $250,000 from the California Wellness Foundation in 2019, and a $400,000 grant to work on Census-related activities in 2018, the group said they were “building information for outreach efforts for the Census and to inform voters of the right to vote and whom to contact if they experience ‘voter suppression’” in the 2020 election. This large organization could flex its organizational muscle in future elections, such as the 2021 California gubernatorial recall election and play a role in mass mail-in voting, ballot harvesting, and the state’s print-at-home ballot system (RAVBM) to their electoral advantage.

North Dakota has an active Native Vote organization, which was founded in 2018 to oppose voter identification laws in the state. North Dakota Native Vote (NDNV) and Four Directions received $500,000 from left-wing website Daily Kos readers in 2018 to support GOTV activities. NDNV also received $100,00 from the Northwest Area Foundation in 2020. In turn, NDNV leadership asked for third-party ballot harvesting in 2020, is pressuring the Biden Administration to shut down the Dakota Access Pipeline project after other tribal organizations pushed the administration to cancel the Keystone XL pipeline in 2021, eliminating thousands of jobs to placate tribal interests. Despite its nonprofit status, NDNV routinely blasted President Trump on its social media streams.

NDN Collective. NDN Collective is another left-wing Native American activist organization that was involved in the 2020 election cycle and is primed for more future involvement through direct activism, podcasts, and social media. NDN’s board features CPUSA activist and NOA leader Judith LeBlanc and far-left activist Edgar Villanueva, among others, and its questionable reputation does not stop there.

NDN Collective has led calls to close Mt. Rushmore, calling it an “international symbol of white supremacy and racial injustice.” NDN president and CEO Nick Tilsen faced charges for his alleged role in a July 3, 2020, protest of President Trump’s speech at Mt. Rushmore, where he allegedly stole a shield from a member of the National Guard.

With a new $12 million grant from the Bezos Earth Fund to tackle climate change in November 2020, the NDN Collective will have the funds to lead left-of-center Native American activists for years to come.

In the next installment, see how Native American organizations are planning to increase their influence.