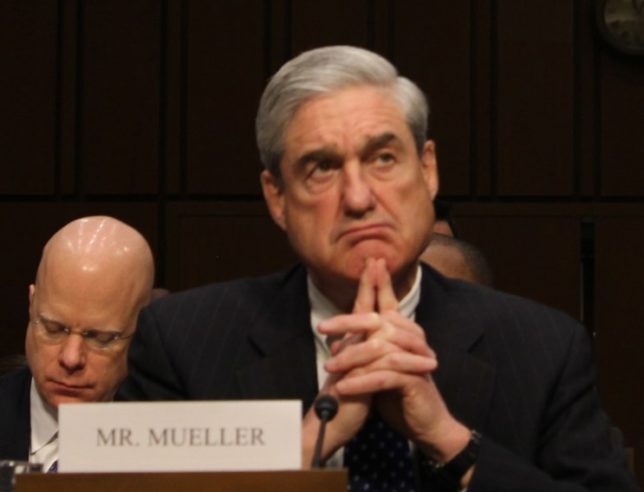 Robert Mueller was permitted to stay for 12 years. As his legally restricted 10-year term was about to end, President Obama asked him to stay on for an additional two years. The Senate approved the highly unusual request with a 100-0 vote. Credit: Medill DC. License: https://bit.ly/3PkV4Te.
by Ken Braun

One year later in May 2005 Robert Mueller visited Madrid and held a joint news conference with the Spanish interior minister. The FBI director was asked about the Mayfield incident and replied as if he had been late for church:

In the course of investigations, there will always be those occasions where something has not gone the way you anticipated. We together move on through those instances and continue the close coordination and cooperation.

In November 2006, the Justice Department paid $2 million to Mayfield as settlement of a lawsuit filed against the FBI for its serial insults to civil liberties. The agreement included an official apology from the “United States of America” for the FBI’s mistakes.

But apologies were apparently off the table at an August 2008 news conference when Mueller addressed the Bureau’s pursuit of Steven Hatfill in the anthrax probe.

I am unapologetic. I do not apologize for any aspect of the investigation that was undertaken over the years. And I think it was erroneous to say there were mistakes.

As he said this, Mueller knew that six weeks earlier the Justice Department had announced it would pay $4.6 million to settle Hatfill’s lawsuit against the Bureau.

One day after Mueller gave the statement, the Justice Department formally exonerated Hatfill with a letter stating “we have concluded, based on laboratory access records, witness accounts and other information, that Dr. Hatfill did not have access to the particular anthrax used in the attacks, and that he was not involved in the anthrax mailings.”

It’s difficult to believe the FBI director didn’t know that letter was on the way when he personally refused to apologize or admit that mistakes had happened.

J. Edgar Hoover was the leader of the FBI for nearly 48 years. As a result of his long and highly controversial stay on the job, a 1976 law limited FBI directors to a 10-year term. Until December 2010 just one person other than Hoover had come remotely close to holding the job for a full decade: William Webster, at 9 years and three months.

Robert Mueller was permitted to stay for 12 years. He started the job on September 4, 2001, one week before the terrorist assault of September 11. As his legally restricted ten-year term was about to end, President Obama asked him to stay on for an additional two years. The Senate approved the highly unusual request with a 100-0 vote.

Like all else in the American security state, the FBI and its mission was transformed after 9/11. The entire American political establishment allowed Robert Mueller to stamp his leadership image on the FBI more profoundly than any director since J. Edgar Hoover, and arguably just as much.

A little-noticed yet implicitly nasty professional criticism of Mueller’s FBI came from the man who replaced him: James Comey.

Comey’s memoir, A Higher Loyalty: Truth, Lies and Leadership, aptly conveys the author’s reverence for his leadership knowledge. Ten pages into the narrative readers receive a warning of the many lessons yet to come. “Although I am no expert,” wrote Comey, “I have studied, read, and thought about ethical leadership since I was a college student and struggled for decades with how to practice it.”

When he took command of the Bureau he found trouble: “My travels around the country and the world taught me something else: The FBI’s leaders weren’t good enough.”

Comey wrote that the best of the business world had taught him to “obsess over leadership talent” and “treat leadership talent like money.” But at the FBI he discovered that “leadership was largely an afterthought” where supervisory positions were too often seized by those most likely to volunteer. He said this was “a recipe for people becoming leaders to escape a job they weren’t doing well or people being promoted by their bosses to get rid of them.”

Even though Comey wrote that he “admired” Mueller’s work, he clearly faults him for the deficient leadership culture. Before taking over, Comey met with the supervisors of each of the FBI’s major divisions. He claims Mueller promised to tell him “what’s really going on” after each discussion.

That comment rocked me. The FBI is an institution devoted to finding the truth. Why would the director need to tell me “what’s really going on” after each meeting? The assumption in Bob’s comment was that senior officials either weren’t aware of what was happening at the FBI or weren’t going to be truthful to me, their new boss, about it. My guess was the latter.

A place where “leadership was largely an afterthought” is a place where big-ticket terrorism investigations end up chasing innocent people.

A Pattern, Not a Coincidence

But the place was a mess before Mueller got there.

Richard Jewell was the wrong man in a domestic terrorism plot before Mueller was running the Bureau. The incompetence that led to Brandon Mayfield and Steven Hatfill to become major terrorism suspects during the Mueller era wasn’t an unpleasant coincidence. It was a problem that hadn’t been fixed.

And incompetence isn’t the only misbehavior pattern.

In 2002, Boston mobster James “Whitey” Bulger ranked second behind only Osama bin Laden on the FBI’s Most Wanted list. At the same time, John Connolly, a former agent at the FBI Boston field office, was on his way to prison for racketeering, obstruction of justice, and lying to an FBI agent. Starting in 1975, Connolly struck up a corrupt confidential informant relationship with Bulger. With the complicity of FBI supervisor John Morris, the pair helped the murderous Bulger commit felonies and avoid capture.

Granted immunity from prosecution after confessing his own misdeeds, Morris became a federal witness against Connolly. The 2002 federal jury failed to convict Connally on additional charges that he had helped Bulger kill police informants. But the accusation caught up to Connolly in 2008 when a Florida jury convicted him of second degree murder for plotting with Bulger to murder a government informant in 1982.

Weaver Cabin Standoff. In 1992, two years after Connolly retired from his corrupt career, a sniper from the Bureau’s Hostage Rescue Team (HRT) fatally shot Vicki Weaver, an unarmed mother holding an infant. The incident occurred during an armed standoff at the remote Idaho cabin she shared with her family and husband, Randy Weaver, then a federal fugitive. Randy Weaver was subsequently acquitted of all serious charges.

FBI supervisors had authorized rules of engagement whereby the HRT snipers in Idaho were told that until a surrender occurred, they “could and should shoot all armed adult males appearing outside the cabin.” A 1994 Department of Justice IG report found that the rules of engagement used at the Weaver cabin “contravened the Constitution of the United States.”

The Justice Department agreed to pay Weaver and his family $3.1 million to settle their lawsuit over the FBI’s behavior.

An after-action report from the Bureau’s Violent Crimes and Major Offenders Section also criticized the alteration of the rules of engagement. An FBI supervisor ordered the report destroyed to prevent Weaver’s criminal defense team from using it as evidence. That supervisor later pleaded guilty to obstruction of justice and received an 18-month prison sentence.

In 1995, FBI Director Louis Freeh disciplined 12 FBI officials for their behavior in the Randy Weaver standoff.

One of the most severely reprimanded was Richard Rogers, commander of the FBI’s Hostage Rescue Team. But before Rogers was disciplined, he commanded the HRT’s disastrous 1993 siege at the Branch Davidian compound in Waco, Texas.

Branch Davidian Compound. Despite the lives of more than two dozen minors hanging in the balance, the leadership of the Bureau’s Hostage Rescue Team seemed to believe that barricaded followers of an Armageddon-curious cult leader still needed more assistance to reach their crazymaking potential.

According to a Texas Monthly report:

[T]he HRT cut off power to the compound; threw flashbang grenades at Branch Davidians who stepped outside the building; mooned and flipped off members of the sect; and engaged in psychological warfare by blasting loud noises during the night, among them the sound of rabbits being slaughtered, the chanting of Tibetan monks (until the Dalai Lama himself heard about it and registered a complaint), and Nancy Sinatra singing “These Boots Are Made for Walkin’.”

An inferno, almost certainly started by the Davidians, engulfed their building soon after the HRT assaulted it with armored vehicles firing tear gas. Among the 75 fatalities were 25 children.

Other Messes. The mishaps described to this point occurred in high-profile cases under strong media attention. It was comparatively difficult to hide the evidence from public scrutiny (though, as noted for the Randy Weaver case, internal cover-ups have been attempted).

Not every FBI suspect draws the white-hot glare of press scrutiny. If there have been other messes made in the shadows, then those would have been easier to keep under wraps.

Mueller, the most influential and longest-serving FBI director in the modern era was willing to claim he had no apologies and that there were no mistakes when asked about an investigation where his agents let a major terrorism probe get lost on the wrong track because of the comically inept “dog technology.”

What might Mueller have done in situations where the media didn’t get a chance to notice the embarrassment or maybe he wasn’t told by his underlings what had happened?

Defenders of the Bureau might point to solutions and reforms implemented after each of these scandals. They would be correct. As one example, the FBI’s hostage negotiators disagreed sharply with the behavior of the Hostage Rescue Team during the Waco siege. Afterward, seeking to create stronger working relationships, the Bureau merged the negotiators and the tactical team into a single command. The HRT has been, in a good way, not as newsworthy since then.

But while it’s true reform efforts are implemented (at least in the situations that we know about), this has perversely become evidence of the problem. To say the FBI doesn’t make the same tragic mistake twice is not reassuring when they continue to creatively make new ones.

In the next installment, recent FBI scandals recall abuses under J. Edgar Hoover.